Andrea Fraser on museum funding and politics in the United States

With $6.8 billion in donations reported to the United States Federal Election Commission (FEC), the 2016 election cycle was the most expensive in American history. In common with other examples of post-election soul-searching from the American Left, 2016 in Museums, Money, and Politics, a book by the American artist Andrea Fraser, takes it as given that America is no longer a democracy. Rather than government by the people through elected representatives, America increasingly resembles a plutocracy, government by the wealthy. Fraser’s unique contribution to these debates is to link the system of private, and increasingly unregulated, campaign finance that now threatens to shorten the life-cycle of electoral politics, to the health of museums.

The nonprofit, a privately governed charitable corporation with a self-perpetuating board of trustees, is the dominant form of arts organisation in the United States. Owing to indirect public subsidy in the form of tax exemptions, nonprofits are deemed ‘public’ despite having next to no democratic oversight. Most egregious however is the increasingly common ‘pay to play’ practice that requires board members to make personal financial contributions to the museums they seek to govern (a seat on the board at the Metropolitan Museum of Art is estimated to cost $10 million), since it is when ‘the people’ gets reconfigured to mean the super-rich that plutocracy threatens society.

In the same year that Donald Trump ran a rabidly populist campaign only to assemble the wealthiest cabinet in American history once in office, donations to the arts, culture, and humanities totalled $18.21 billion. To make the case that cultural patronage is an issue of concern, or at least should be, to any American anxious about their country’s direction of travel, Fraser, along with a team of collaborators, reviewed an incredible 500,000 FEC contributions made by 2,411 museum board members in order to spell out the relationship between campaign finance and cultural patronage. The data is divided into two sets; the first lists board members by organisation FIG. 1 – only museums that exhibit contemporary art and have budgets over $2.5 million are included – while the second lists individual political contributions by donor name FIG. 2. Saucer-sized pie charts record the ideological orientation of donors FIG. 3 and FIG. 4.

Ordered alphabetically like a telephone book, over nine hundred pages of data are left to speak for themselves since the project ‘does not provide further analysis of the data itself. That analysis is left to the reader’ (p.18). Nevertheless, in her introduction Fraser is upfront about how her finding that forty-two per cent of total contributions ($89,218,586) went to Republican candidates brought about a ‘personal sense of horror’ (p.14). Even those who don’t share the overwhelmingly leftist political orientation of art workers can wonder at trustees who, by financing right-wing politicians who rail against ‘cultural elites’ and journalists FIG. 5 – ‘enemies of the people’ who propagate ‘fake, fake, disgusting news’, according to the incumbent President – attack the stated missions of the institutions they ostensibly support. 1

In her preamble Fraser describes how late nineteenth- and early twentieth-century American philanthropists were grilled by a sceptical press whose readership took a dim view of the ruthless business practices of donors such as Andrew Carnegie and Henry Clay Frick. In contrast, the cultural organisations that still bear their names tend now to be uncritically celebrated. 2016 is an affirmation that scrutiny is not unseemly, and the project belongs to the same tradition of muckraking journalism that took on the corruption during America’s Gilded Age.

It is no less the case today that representative government requires confidence in the system and even the appearance of improper influence can cause disenchantment not only with government but with democracy itself. Fraser is adamant therefore that artists and museum professionals who take whatever money is on offer must ask themselves whether their professional interests are ‘consistent with their interests as citizens of an open and democratic society’ (p.15). Given that both parties have lost the confidence of voters for appearing to have become disproportionately responsive to big-money donors, cultural institutions cannot afford to continue with business as usual. Appearances matter, and in today’s culture wars the risk is that the progressive cultural politics championed by museums become irretrievably associated with unbelievable private wealth and extreme inequality.

2016 continues work began in ‘L’ 1%, C’est Moi’, an essay Fraser wrote in 2011, which examined how art prices go up not when society becomes more prosperous as a whole, but only when income inequality increases. The essay quotes Jeremy Hunt, who was then the United Kingdom’s Culture Secretary, and his call for an ‘American-style culture of philanthropy’ to help shore up dwindling arts funding for British institutions. ‘Don’t do it!’, was Fraser’s response, ‘Let this tale of inequality and crisis in the US be a cautionary one’.2 Her latest institutional critique provides a significant public service and is a reminder to citizens everywhere, even those who inhabit the art world, that it is necessary to engage with politics at the level of policy, and governance, and not only in theory. 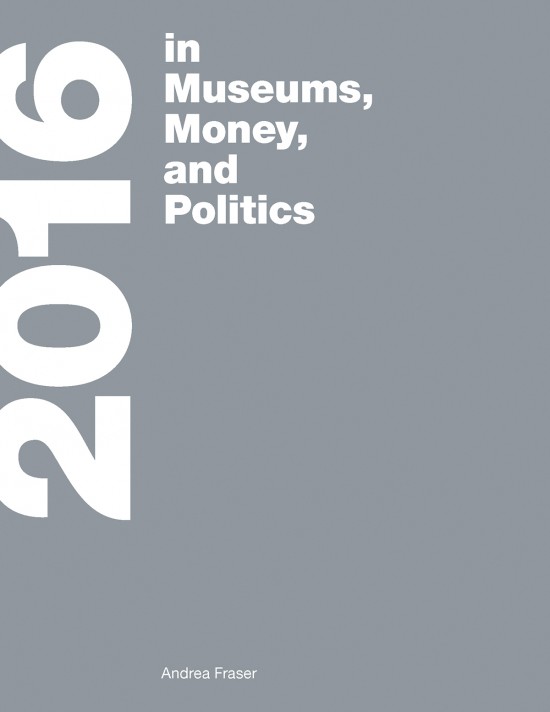 teaches Material Art History at City and Guilds School of Art, London, and Critical and Historical Studies at the Royal College of Art, London. She was a Learning Workshop Assistant at the National Portrait Gallery, London, from 2012 until June 2020.