The artist Karin Bolender wants a world in which humans and equines arrange their lives as equals. In Paris, Tennessee, in 2002, Bolender married an American Spotted Ass, a pregnant donkey, and the two rode off into the sunset at a pace of two miles per hour FIG. 1. In the process, Bolender ‘unnamed’ her espoused, Aliass. This unnaming is one of many moments of revelation and transcendence that populate Bolender’s book. Ambitious, complex and non-linear, it is a memoir entangled with literary homage, a reluctant autobiography of an artist and her ass. It is an account of a performative artistic research project that is dedicated to a practice of world-making. It takes readers from dubious redemption narratives – longings for a kind of Edenic connection to nature – towards a mode of reparation and, ultimately, to a new way of co-authoring across species boundaries.

World-making is a term popular among artists and authors trying to incorporate, rather than merely represent, the subjectivities of ‘other-than-human’ species as a means of speculating more equitable post-humanist futures FIG. 2.1 Like many others postulating these worlds, Bolender begins this process by examining the thought processes that have impeded us from recognising other species as anything more than resources that we can label and exploit to serve our interests. Bolender seeks to trace the liminal territories where fictions – for example the act of naming – begin and end. We can only make a new world, as the philosopher Nelson Goodman observed, from the matter of the worlds that made us, and, more often than not, from a worldview that shaped our subjectivities.2 As such, Bolender’s world is The World – our world – a dominion in which humans rule over all other species with violence and the exploitation licensed by the faculty of language.

Early on in the book under review, Bolender is overwhelmed with a crippling sense of responsibility that itself seems to be a by-product of an inverse humanism: an awareness that the centring of human perspective is as much the cause of suffering as it is the engine of compassion. She writes: ‘Can we find ways to move beyond the paralyses of fear and shame, knowing our global systems flood some places more than others with invisible toxins, poisoning soil and watersheds and entangled livelihoods that depend on them? How can we reckon with all that is being lost at our hands?’ (p.47). This is a problem that Bolender decides must be lived through. Over the course of twenty years, she performs her philosophy alongside Aliass. Their road-life, as they traverse the American South, is distilled into paragraphs documenting their daily attempts to communicate. They become friends who are comfortable alone together. They prepare for the birth of Passenger, as Bolender names Aliass’s foal, and their ‘ass family’ learns to live through volatile uncertainty. They share a common goal:

We set out on this quest as a pair of embodied beasts – one wracked with ethical and poetic conflicts and questions, and the other bound to bear the burdens of them– into these uniquely storied realms of [William] Faulkner’s fictional Yoknapawtapha County and beyond, with the intent of immersing into otherwise place-bound stories. (p.22)

The paragraphs are broken up by fleeting encounters with ‘bygone mules and ghosts and other invisible residues of the American South’ (p.32). On their literary pilgrimage, they meet the spirit of Faulkner in the Rowan Oak, his former home in Oxford, Mississippi. Expected again in Faulkner's fictionalised location of Carcassone, the ghostly Nobel Laureate never shows. In Knoxville, in search of something intangible left behind by the protagonist of Cormac McCarthy’s semi-autobiographical novel Suttree (1979), they instead bump into McCarthy’s brother. These literary encounters offer little in the matter of true sustenance to Karin and Aliass, or to other human-animal families surviving – rather than ‘living’ – in contemporary rural America. Bolender is refreshingly honest about the limits of her project, often acknowledging her inability to connect with people, histories and animals. Her practice of ‘unnaming’ for example, is a mechanism for marking the uncertainties that the definitive act of naming elides. ‘Unnaming’ does not define, it acknowledges. Such acknowledgments are, by definition, open to interpretation – both for the reader and Bolender, whose practice of world-making embraces uncertainty.

But does the artistic gesture take us closer to a world that’s truly inclusive? The labour of world-making, as documented in the book, belongs to Bolender alone. Her story is fuelled by a need for redemption from the damage of the Anthropocene. It is a story that is difficult to write precisely because it lies at the core of two otherwise opposing subjectivities: Western literary fiction and popular contemporary eco-narratives (p.63). Some of book’s most uneasy passages fall into the tropes of these genres. For example, Bolender and Aliass deliver a ‘Dead-Car Wagon’ composed of salvaged car parts to a church ‘in a sad town’ called Eden (pp.248–75) FIG. 3 FIG. 4. This performative action was Bolender’s attempt to ‘assuage some of the shame of partaking in endless extractive oil-and-asphalt nightmares that harm earthly bodies and beloved places’, but as she admits, redemption was ‘nowhere to be found’ (p.273). And that’s just Bolender’s assessement; one can only imagine what Aliass, dragging the interior of a junkyard car through rural Virginia, made of the experience.

The problem with gestures of redemption is that, in the end, they are inward looking, offering personal sanctification rather than global transfiguration. They are a self-administered absolution from responsibility for imposing suffering – as only humans can – on the very beings they vow to protect. The weight of guilt is not so much dissolved but placed on the animal. Bolender is, of course, acutely aware of this. She writes: ‘There must be openings for respectful recognition of unknown, entangled otherness’ (p.170), citing the animots of philosopher Hélène Cixous.3 But as she lives with an animal, Bolender seemingly comes to realise that there are no ‘others’. Instead, everything is ‘us’, in a co-dependent, life-long relationship of maintenance with the complexity and responsibility this entails. The vexed question arises, how can this be achieved across the incommensurability to which Boldender consistently refers? As the memoir is in part Aliass’s story, Bolender is necessarily faced with the question of whether the donkey’s voice manifests in the text itself.

Aliass doesn’t bray for a significant part of their journey, but instead asserts her own agency through sulking. It is her sulks that come to define the temporal arrangement of the book. At one point, in response, Bolender applies force (dragging her ass), regrets it and eventually surrenders. It isn’t truculence on Aliass’s part, she comes to understand. ‘Mulish’ stubbornness is the term humans apply to caution and good judgment. During one of her many sulks, for example, Aliass stops in the middle of two-way traffic. She isn’t simply frozen: she calculates. Despite the danger of the surrounding traffic, she refuses to move until she sees a pavement, ‘somehow drawn to its purpose in spite of never needing such a thing before’ (p.206) FIG. 5. It is a pavement, Bolender admits, that she never saw. The sulk is Aliass’s very own gesture that allows for mutual and intuitive trust between the two. Here, it is Aliass who leads Bolender beyond the paralysis of ethics – and human shame – towards what the Norwich-based artist and writer Steve Baker identified as a third way of judging whether our collaborations with other than humans are just and worthwhile: trust. Trust the animal; trust the object.4

As mutual trust becomes effortless between Bolender and her equine, a world comes to life. A truly collaborative masterpiece emerges in the form of oddly shaped blocks of Assmilk Soap FIG. 6. The soap is made from Aliass’s milk and ingredients that range from the botanical species of a specific bioregion to culturally loaded objects or substances. Containing information about specific locations and antibodies, ass milk is an immuno-biological map of place, politics, history and levels of bio-chemical pollution. The performative, collaborative alliance between animal and human here is a point of shared divergence, rather than a relationship of similarity, that allows each being to remain autonomous and heterogeneous while coexisting together.5 Assmilk Soap allows each of the authors to collaborate on their own terms. Some readers might note that this creation is also easily commodified, but this is part of Bolender’s point: each object is a history of places and lives shaped by power inequities. The soap becomes a tangible expression, simultaneously cleansing and besmirching its holder.

In the pandemic era, Bolender’s book reveals to the reader that no hygiene product can rinse away our shadowed past, nor protect us against contaminated futures. We must continue, if we are to find a way out of an extractivist nightmare, to trust the unfamiliar: the animal, the object, our intuition. Intimacy can only be gained through a disciplined kind of trust and necessarily requires an incalculable leap of faith. As such, it is fraught with risks and the rewards it brings can be as deadly as its absence. 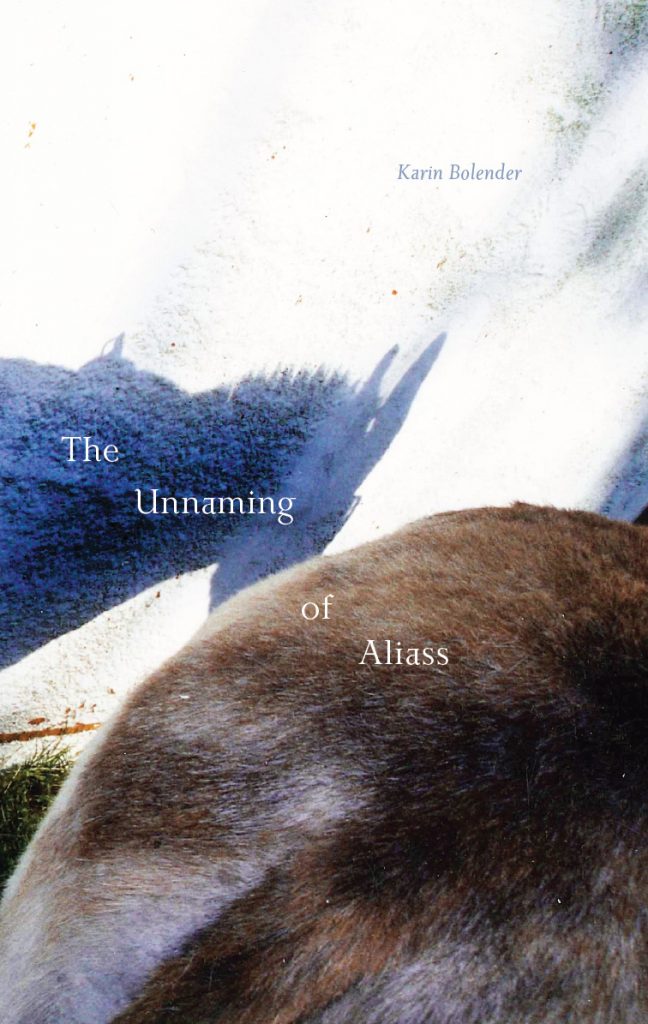 is an artist and a writer. She works as a lecturer and is a PhD candidate at Kunstakademiet in Trondheim, Norway; she is also a researcher at ALICE laboratory at École polytechnique fédérale de Lausanne. Additionally, she is an associate editor at Humanimalia, an open-access journal of human/animal studies in Utrecht, The Netherlands.