The artist, writer and musician Johanna Hedva is drawn to black holes and the sounds that they make. Hedva is a genderqueer person interested in making art that responds to mosh pits, sickness, the medical-industrial complex, witchcraft, mysticism, hagiography and the stuff that flows, often involuntarily, out of bodies. In 2016 Hedva published the essay ‘Sick woman theory’, which detailed their experience of not being able to attend Black Lives Matter protests due to chronic illness. In it, their message was unmistakable: ‘the most anti-capitalist protest is to care for another and for yourself’.1 For Hedva, capitalism thrives on the guarantee that some people die unnecessarily, while others live.

Minerva the Miscarriage of the Brain is a complex meditation on survival. Told in ten discrete parts, the book covers the last decade of Hedva’s life and work, weaving together essays, poems and photographic documentation of their performance art FIG. 1 FIG. 2. The book itself is an object of beauty, designed by the artist Vivian Sming and punctuated by Isabelle Albuquerque’s sculptural drawings. It would be easy to mistake Minerva for a catalogue of Hedva’s most esteemed works FIG. 3. Conversely, failure, blood and muck are rife throughout these pages. The book is a manifestation of dismembered pain and regret, in which Hedva attempts to relinquish their past through writing, assembling and abandonment by delivering the resulting text to their audience.

The book’s title is a line taken from Robert Lowell’s poem ‘Beyond the Alps’, which documents a train journey the poet took from Rome to Paris in 1950. Lowell wrote the poem two years later, not long before he was admitted to Payne Whitney Clinic, a psychiatric hospital in New York. As Lowell’s train carriage moves through the mountains, his reflections on the landscape outside can be read as symbolic regions of the self. Lowell’s activity of self-discovery through poetic endeavour and travel can be traced back to Aeneas, whose journey from Greece to Italy formed the body of Virgil’s The Aeneid. In Roman mythology, Minerva – the goddess of poetry, medicine, wisdom and strategic warfare – erupted from the head of her father, Jupiter, after he tried to prevent her birth by consuming her mother, Metis. Hedva’s adoption of Lowell’s line as the book’s title is significant, as Hedva’s project is to tackle the supposed ‘non-experience’ of miscarriage.

Details and events from the last ten years of Hedva’s life are revealed in gradual stages throughout Minerva. The publication is bookended by two traumatic events: Hedva’s miscarriage in 2010; and the death of their mother a decade later. Hedva suffers from a chronic illness that prevents them from having children. Looking at the language often used in relation to miscarriages, Hedva recalls their doctor’s certainty that they ‘couldn’t carry [their unborn child] in the right way’ (p.86). Through writing, Hedva unravels the notion that a body could hold a foetus ‘wrongly’, reject it and expel it completely. The rupture of birth and death are dealt with in explicit terms throughout Minerva, suggesting that language fails us in its lack of vocabulary for those caught between the living and the dead.

Hedva’s linguistic approach echoes what the poet and theorist Daniel Tiffany calls the ‘special effects of poetry’: when something is hidden in a text because ‘the reader comprehends the verbal emblem of darkness’.2 Hedva’s use of language shrouds already ambiguous emotions in obscurity (p.140):

How to Talk to Your Mother:

Don’t call her Mother. Speak the Via Negativa. Sell your
hair for a mirror. Fill the cave of yourself with nothing and
let this nothing come alive with what it needs and the blissful certainty that it will get it, yes, it will get it. (The face of nothing is a mother’s face.)

Just as Hedva instructs their reader to occupy ‘the cave of yourself’ with a substantial nothingness, a dark void, elsewhere they write (p.39):

A woman’s
got most of these caves inside her
own body and the caves outside her
are spots of black disappointment,
she understands everything, especially
that she is alone.

Hedva’s book sets up the possibility of revelation at any moment. It also obscures the distinction between internal and external worlds: a woman is a cave living inside a cave, Hedva tells the reader, with many other cavernous parts within them.

In Part 3 of the book, ‘Man Church’, Hedva recounts a 2011 performance that went badly. The Real Life of Johanna Hedva ended halfway through when the artist felt treacherously overcome’ with feelings of violence: an urge to kill one of the participants, Andrés Iglesias (whose name translates as Man Church). The premise of the work was that Hedva would spend twenty-four hours with someone they had never met before: ‘I’d follow them around during one of their “regular” days, eat what they ate, do what they did, sleep with them in their bed. But I wouldn’t be a fly on the wall; I’d maintain as best I could my own subjectivity [. . .] I termed my role as a “subjective participant in their life”’ (p.51). For their first ‘subjective’ participation, the artist spent the day with a man called Abe, watching a movie, frequenting gay bars in Silver Lake in Los Angeles and visiting a warehouse of artist studios – one of which, Hedva recalls, had a ‘a giant drawing of a man eating out a woman while another man looks down on them, holding a syringe in one hand and a knife in the other, and a pair of doves are flying away'. (p.52) FIG. 4. The performance was an endurance test; after the twenty-four hours were up, Hedva ‘cried for several hours, of exhaustion’ (p.53).

By contrast, Hedva abandoned the project after only fifteen hours in Iglesias’s company. Rather than exhaustion, Hedva was overcome with rage, driving away with ‘what felt like a skinned, feral cat breaching from [their] chest’ (p.55). In ‘Man Church’, Hedva traverses the wrath, the stoppage and eventual refusal at the heart of this performance. It ended abruptly when Iglesias declared ‘I’m not into that’, after discovering Hedva was on their period when the two tried to have sex (p.61). In reflecting on the performance, Hedva describes Iglesias as ‘the banality of straight men’, whereas he equates Hedva with the ‘stains’ they have produced. His rejection of that – the sign of bodily presence – stimulates Hedva’s fury, which turns into a ‘murderous rage’. In Minerva, Hedva and Iglesias trade positions of judgment. Whereas Iglesias’s retort was effective but unremarkable, Hedva’s critique of him is intricately formulated and delivers a fatal blow.

The final chapter of Minerva recalls how the book came into existence. Begun as a hapless attempt to compile five years of work, Hedva admits it ‘was not conceived at all’ (p.166). Rather, its grotesque body emerged as Hedva noticed ‘shared DNA’ in their recent works. Minerva is characterised by what Julia Kristeva terms as ‘the abject’, defined by ‘a burden both repellent and repelled, a deep well of memory that is unapproachable and intimate’.3 Hedva’s intricate descriptions of stains, for instance, demonstrates an affinity with Kristeva’s writings. In Part 2, Hedva recalls a memorable encounter with their ex-husband and a stain (p.33):

The first laundry day, we stripped the bed and
discovered a stain on their mattress, the size of a small child,
and old: body of the blood browned,
spread out tentacular like a puddle of sick, and
at the edges, yellow.

This 'disgusting mark' also calls to mind Piss Flowers (1991–92), a series of sculptures made by the British artist Helen Chadwick and her husband, David Notarius. Piss Flowers were cast from cavities in snow created by Chadwick’s and Notarius’s hot urine. The ‘uncontrollable bodily process was the creative element’, Chadwick neatly surmised, as indeed, Hedva’s ‘tentacular’ and vomit-like stains are vital parts of their writing.4

In Minerva, Hedva positions staining as a new lexicon, invoking the positive potential of language as contagion: the spreading of ideas. Whereas stains bear the mark of permanence, Hedva ruminates on how we might be able to harness their power by making slight alterations to each shape. In her book Impersonal Passion (2005) the poet Denise Riley explored linguistic acts of naming and accusation as forms of staining. According to Riley, we are each assigned names, roles and character traits that stick and have the potential to limit or even damage us.5 After ‘Man Church’, Hedva accepted that they were ‘the stains’, creating a divide between the author’s voice and the experience of their past self. Hedva has gone by and goes by many names: ‘There are selves, many of them, that I meet in my dreams, as in life’. (p.165)

Following the abandoned performance, the artist would have to unknow their past self to find a new one and assign a new name. The censored surname in the performance title, The Real Life of Johanna Hedva, references an old, past self: they have been, and still are, Johanna Reed, Johanna Kozma and, most recently, Johanna Hedva. The artist removes themselves from the performance both by physically fleeing from it and revoking the self that made it. This is a process that resists easy documentation, but Minerva is a credible attempt to create an artistic record by positioning their work into a singular, albeit fragmented, document. FIG. 5

‘I will now watch you fade to black’, Hedva writes as the book draws to its close. We know that Minerva was ‘never conceived’, as such, but here is the book’s unmistakable death. Just as Hedva’s work in performance is reliant on artistic communities in Los Angeles and Berlin, where they live currently, Minerva is bound to the discourse and exchange made possible between writers and their readers. As a writer, Hedva is comforted by distance – from their self and from others – ‘permanently out of reach, further than the light can travel’ (p.166). Minerva is a book to be read and, afterwards, extinguished. 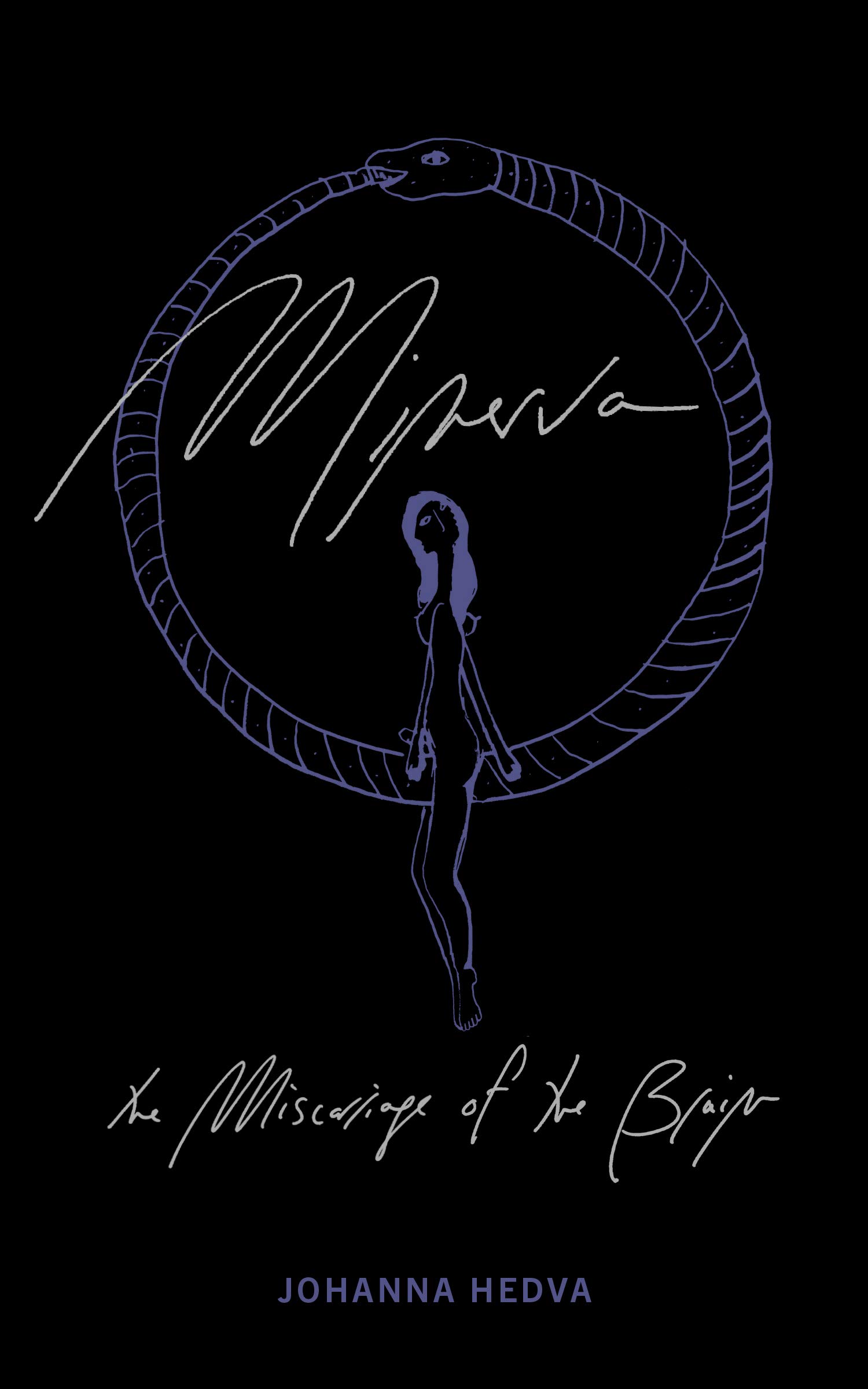 Minerva the Miscarriage of the Brain

is a writer based in London.