Gender identity at the Hayward

The exhibition Kiss My Genders at the Hayward Gallery, London, presents the work of thirty-five artists whose work explores themes of gender identity not as a fixed set of categories, but rather as something to be challenged, reconsidered and in some cases rejected altogether. Upon entering the exhibition, the scent of latex and the faint sounds of Cantonese music extending from Victoria Sin’s A View From Elsewhere FIG. 1 sets the tone for an exhibition that is immersive, playful and fabulously queer.

Many of the works on view have had ambitious site-specific installations constructed for their display at the Hayward. For instance, viewers of Hannah Quinlan’s and Rosie Hastings’s video installation ​Something for the Boys​ are enticed into the space via a spiralling corridor lined with draped silver fabric and dimly lit with fluorescent pink lighting. At the heart of the structure is a single-screen projection FIG. 2, which shows alternatively a drag rendition of ‘I Am What I Am’ FIG. 3 and a go-go performer dancing alone to techno. The fifteen-minute long video presents a series of vignettes filmed at two locations in Blackpool: the cabaret theatre Funny Girls and a hyper-masculine gay club, Growlr. The spaces are inhabited, respectively, by the drag performer Miss Betty Legs Diamond and the dancer Ted Rogers, both of whom perform to empty rooms. As with Quinlan’s and Hastings’s earlier video project UK Gay Bar Directory (2015–16), the tone of Something for the Boys is melancholic; it explores the politics, histories and aesthetics of queer spaces while sharply exposing the gentrification and erasure of them.

Similarly, in order to view Jenkin van Zyl’s video-installation Looners FIG. 4 visitors enter through a curtained doorway a space that resembles a torture museum or ghost train. Mostly shot at abandoned film sets in the Atlas Mountains, the video features monster-like performers, anonymised by their silicone masks, who enact ritualistic scenes of violence and pleasure. It is a disturbing and absurd attempt to dismantle binary classifications – ‘real and virtual, front and back stage, male and female, self and other, ruin and repair, time and space, fantasy and rationality’ (p.222). Much like the artificial film sets within which the avatars frolic, gender is a construct that can be continuously reinvented. Van Zyl's interest in 'multiple selves, instability and deviance' is also reflected by the increasingly frantic pace of the narrative. The work is bizarre if not funny per se, rather the cinematic form and content echoes Zyl's premise that gender identity can be chaotic, thrilling and perhaps daunting at times.

Due to the immersive installations, innovative curation and humorous nature of many works on display, the overall tone of the exhibition is playful and inventive. While this may not seem an appropriate or 'serious' strategy, it serves as a reminder that humour has often acted as an important survival strategy for many members of the LGBTQ+ community. Furthermore, this tone is not at the expense of works that are more overtly political in nature. Zanele Muholi’s photographic series Crime Scene (2012), for instance, documents the brutalities faced by many South African Black, lesbian and transgender individuals. As an accompanying quote emphasises, Muholi sees their work as inherently political: ‘It’s not for show. It’s not for play’. Nearby is Hunter Reynolds's Memorial Dress (1993–2007), a black ball gown printed with the names of 25,000 individuals known to have died of AIDS-related illnesses. It was first seen at the Institute of Contemporary Art, Boston, where, standing on a revolving platform before an audience of up to 2,000 people, Reynolds transformed himself into a living memorial. Its display here is sensitive: the gown revolves silently upon a platform that also bears further names of individuals lost by AIDS. During the ‘pride season’ with which the exhibition coincides, these works in particular serve as a poignant reminder of the inequalities still faced by members of the LGBTQ+ community.

While the press release celebrates that the exhibition ‘places a particular emphasis on works that revisit the tradition of photographic portraiture’, this is perhaps the display’s major downfall. One of the exhibition spaces in particular is overcrowded with photographs by pictures by Peter Hujar, who documented the queer community in 1970s New York FIG. 5, as well as by Catherine Opie and Del LaGrace Volcano FIG. 6, both of whom created intimate portraits of gender non-conforming individuals, especially during the 1990s. Although these works have provoked important conversations, their static display and representational nature seemed out of place in comparison with those works exploring gender beyond physical representations of the human body.

Several works in the upper mezzanine address gender identity by completely eradicating the human form. For example, in Systems II and III and Testo-Candle (2017), Jes Fan explores the biopolitics behind identity transformation by using pharmaceutical materials (including depo-testosterone, melanin and estradiol) as sculptural materials in order to speculatively reconfigure racial and transgender identity. This is particularly evident in Systems, in which Fan injects ethereal glass sculptures with silicone and with melanin pigment in order to create alluring abstract patterns FIG. 7. These inorganic and non-representational objects are, paradoxically, concrete abstractions of a body. As Fan explains, their practice is ‘a study in material essentialism, albeit to the point of absurdity’ in which identity, when boiled down to its core, is not easily classifiable (p.127).

The exhibition extends beyond the walls of the Gallery and onto the Southbank: the poster for Joan Jett Blakk’s 1992 presidential campaign has been fly-posted across one of the exterior walls; work by Athi-Patra Ruga transforms the windows of the Queen Elizabeth Hall with brightly coloured vinyl, filling them with gender non-conforming avatars; and Ad Minoliti’s abstract non-binary characters are printed on nearby bollards, flags and windsocks as part of a site-wide installation entitled Playcentre (2019).

Although it is at times overly reliant on representational art forms, the exhibition’s inclusion of works exploring materiality produced compelling and nuanced figurations that opened up new and refreshing ways of thinking about gender identity. The inventive curation and playfulness at the heart of many of the works exhibited in Kiss My Genders successfully provides visitors a complete sensory experience while also offering a timely exploration around the lived and imagined complexities of embodied identity. 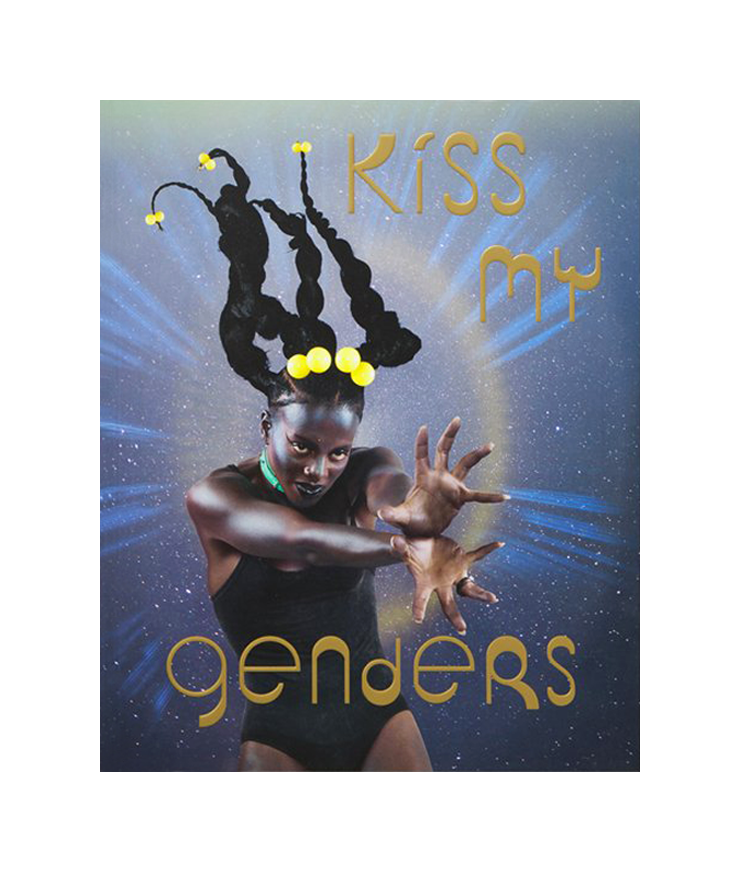 Daniel Fountain is an artist and lecturer based in Leicestershire. He is currently undertaking a practice-led PhD at Loughborough University exploring queer craft and trash aesthetics.