One of the first references to the presence of a third gender in French Polynesia in the Western archive can be found in the diary of a marine officer. In 1789, during a stay on the island of Tahiti, George Mortimer recorded an encounter between a sailor and a local girl at a night-time dance. Upon inviting her to return to the ship with him, he was surprised to learn that ‘this supposed damsel, when stripped of her theatrical paraphernalia, [was] a smart dapper lad’.1 For Yuki Kihara (b.1975), the New Zealand representative at the 59th Venice Biennale, another ‘first’ introduction called for a radical shift in tone. She is the first Pasifika artist to represent the country and the first fa’afafine artist in history to be exhibited at the Biennale, and Mortimer’s tale in many ways sets the scene for her landmark presentation.

An indigenous gender identification, the word fa’afafine roughly translates into English as ‘in the manner of a woman’. It describes Samoans who were assigned male at birth but have decided to adopt a feminine social role. They exist, says Kihara, in the Vā – the ‘space between men and women’.2 Referencing the complexity of this idea, the New Zealand pavilion is divided into two areas FIG. 1. On one side is an archive, an exhibition within an exhibition, comprising printed material mounted on a Siapo-inspired print FIG. 2.3 The second section is a collaborative undertaking: twelve photographs and a video installation address the historical and cultural legacy of Paul Gauguin, who lived in Tahiti from 1891 to 1893 and again from 1895 to 1901, depicting its landscape and inhabitants, reproducing his painted ‘paradise’ in all of its deceit.

At the entrance to the pavilion is a 3D model of the underwater Vailulu’u volcano, Samoa, which Kihara has rendered in the garish colours of the rainbow flag FIG. 3. Although integrated into the global queer community, the fa’afafine are distinctive for their ties to the land and kinship system.  When it was discovered it 1975, Vailulu’u was originally referred to as Fa’afafine Seamount, a name selected by the geologist Stanley Robert Hart because, as he explained: ‘the size of the volcano was a surprise and wasn’t at all what it appeared to be’.4 To him the fa’afafine volcano was a geological deceit, a ‘wolf in sheep’s clothing’.5 As such, simmering beneath Kihara’s volcano lies a message: Samoa is not an all-inclusive rainbow outpost or a gender utopia, it can also be a hostile terrain. The placement of the work at the beginning of the exhibition can be read as an acerbic gesture, in which the artist acknowledges that the colonial dynamic of discovery is what initially defines the nature of her audience’s reception.

On the wall behind the volcano is a collection of archival material: ethnographic photography, colonial portraits, reproductions of Gauguin’s orientalist paintings and pages from books and journals written by missionaries who travelled to the region in the eighteenth and nineteenth centuries. We learn of their incriminations: after Europeans arrived in the Pacific, they glossed fa’afafine gender variance as an excessive symptom of the alleged Polynesian ‘primitive’ and ‘savage sexuality’.6 Subsequently they were erased from the archive of colonial knowledge and swept from public view. Set among Kihara’s offerings are ephemera of contemporary Pacific life: tourist clickbait, misgendered passports, polarising news clippings and data evidence of rising sea levels. In the centre of the display are a number of image comparisons in which Kihara investigates the androgyny of Gauguin’s ‘maidens’ to ask the question: what if they were, in reality, fa’afafine? FIG. 4. In this composite work, tiki pop culture rubs shoulders with ethnography, administration grates against speculation and headline news clamours alongside the steady written voice of the missionary.

As with any archive, the collection of information requires a methodology. It is this potential manipulation that Kihara is drawn to. To make sense of his imperial scope, the colonial archivist opted for the analogue: he read left to right, top to bottom and listed from beginning to end. Kihara’s archive does not subscribe to these criteria: her source material is unlabelled and presented without hierarchy. She refuses the viewer a straightforward, chronological relationship with her selected information; it is at once pan-historical, private and public, factual and fictive. Between these polarities the artist’s presence takes shape – a complex stitching of the self. The title of the work, Vārchive, implicates the artist’s philosophy and existence ‘in between’ the material construction of the work. In this context, Albert Wendt’s definition of the term Vā is instructive:

The betweenness, not empty space, not space that separates but space that relates, that holds separate entities and things together in the Unity-that-is-All, the space that is context, giving meaning to things.7

The second section of Kihara’s exhibition comprises a vivid seascape backdrop, on which hangs a series of photographs of fa’afafine models set among the beaches, riverbanks and gardens of Upolu island in Samoa FIG. 5. Each image is a re-enactment of a painting produced by Gauguin during his time in Tahiti in the 1890s, which employ the ‘dusky maiden’ trope FIG. 6 FIG. 7 FIG. 8 FIG. 9. To viewers at the time, the dusky maiden resided in an intoxicating paradise, where the travelling man could escape the refinement of modern life for, as Johanna Schmidt writes, a place of ‘natural pleasure and urges [. . .] iconic of primal sexuality’.8 In aesthetic terms, Gauguin embarked on the early modernist pursuit of formal reduction; he was less concerned with realism. Critics commented that his raw brushstrokes conveyed the simplicity of his ‘primitive’ Polynesian muses. For Kihara, abstraction therefore contains a harmful aesthetic value. By contrast, her use of high-resolution photography presents a new ‘clarity’, enacting a reparative process: she opts for life stories over compositional concerns, close friends over nameless figures and rejects conquest by asking permission.9

It is perhaps reductive to celebrate Kihara’s images simply for their revised ‘humanity’ or to read their gender variance as a subversion of the male gaze. Moreover, in conversation with the present author, Kihara stated that returning the primitive, heteronormative gaze was a ‘secondary concern’.10 For her, the exhibition, which will travel to Aotearoa/New Zealand, is for one audience only: the fa’afafine. With this in mind, Kihara’s photographic series reveals her activist impulse; it is a proud family portrait, one that introduces a community to the Biennale, and vice versa, for the first time.

The seascape wallpaper on which these photographs are mounted depicts Saleapaga Beach, Samoa. The crisp saturated photograph cocoons the viewer in the allure of the tourist resort. The ocean is the island’s extension into the globe; it is a space of arrival and departure, a vector of tourist economies, the force of colonialisation and the commerce of tiki culture and its pull. For Kihara, as quoted in the exhibition catalogue, Gauguin is a key figure in this system: ‘I used to see Gauguin’s work feature in tourism paraphernalia like coffee mugs, postcards, T-shirts, posters [...] it was as if time and space had collapsed’ (p.26). To the artist, the dusky maiden, like the seascape, is a stock image; it is the epitome of kitsch. Kihara’s cast of fa’afafine turn these representations into something very different. In measured poise, the fa’afafine models transmit the vivacity and ‘instant character’ of the camp sensibility.11 They give excessive elegance, ‘oops-you-caught-me’, ‘careful-of-the-hair’ and serve us real fruit, breathing fresh air into polluting visions of island life. In Kihara’s ‘paradise’, camp replaces kitsch.

Although Kihara’s pavilion is at times light-hearted, it also tugs at the relationship between notions of paradise, camp and whiteness. As the models reperform Gauguinesque elegance, a text sits on the wall above them: ‘In New Zealand and Australia, I had to adapt to that Western life: I couldn’t be the fa’afafine I had to be’. With this juxtaposition, Kihara references the continued dominance of Gauguin’s imported maiden, even on those who appear to be impervious to it. This idea is amplified in the photograph Paul Gauguin with a hat (After Gauguin) FIG. 10, in which the artist adopts the role of Gauguin himself, depicted in a suit, modish vest and a straw hat. The realism of her butch drag is unnerving: the latex skin is an inch thick and glued to the artist’s face. It is a concise image of the ugly condition of her anger and disgust, suffocation and dysphoria. Here, a more toxic and complex relationship between Kihara and Gauguin is laid to bare.

This kind of shape-shifting ambiguity underscores Kihara’s exhibition at Venice. For the artist, hyper-visible representations and notions of ‘paradise’ have produced possibilities for misrecognition and the very ways in which the fa’afafine emerged into the archive of knowledge. Her works respond to this dynamic, teetering along the divisions between expectation and reality, foreground and background, outside and inside. She demonstrates to the viewer that minority identities are often formed from within the available representations that occlude or oppress them. Kihara does not fully dispense with ‘paradise’, instead using it as a tool for recycling and reframing. The result is a productive offering, one that fosters a sense of belonging and reality for her community. 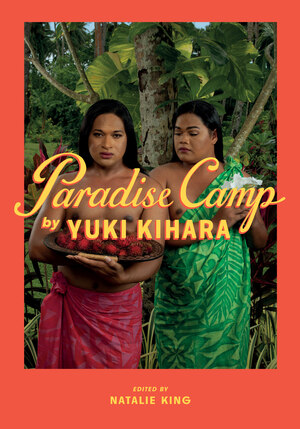 is Editorial Assistant at Burlington Contemporary.