Bolt from the Blue

Jeremy Cooper’s work of fiction Bolt from the Blue is an epistolary novel that consists of the postcards, letters and emails sent between a mother and daughter over the course of thirty years. Beginning in 1985, after Lynn Gallagher leaves her childhood home in a Birmingham suburb for St Martin’s College of Art, London, and ending with her mother’s death on the Spanish coast in 2018, their correspondence offers a fragmentary picture of a complex relationship. As Lynn explains in the book’s short preface, there are many gaps where letters have gone missing or were replaced by phone calls. The text, she says, ‘remains a selective misrepresentation of who I am’ (p.11), but on the other hand, ‘nothing is ever complete, everything always a version’ (p.10). It is impossible, this novel suggests, to tell the whole story of a life.

Lynn moves to London to become an artist, immersing herself in the burgeoning world of the Young British Artists (YBAs). She sends reports home of what she has seen in such detail that she worries that she is starting to ‘bang on about art’ (p.29). Consequently, the book reads in part as an ad hoc history of the London art scene. Lynn’s fictional life and artistic progression are interwoven with the lives and works of well-known artists: her letters refer by name to Damien Hirst – described as ‘a short ballsy bloke from Leeds’ (p.26) – Gary Hume, Georgie Hopton, Michael Landy, Rachel Whiteread and Gavin Turk FIG. 1 among many others.

Much of the correspondence between Lynn and her mother is written on the backs of postcards, many of which are described in detail as sidenotes. Although the writing assigned to them is fictional, the postcards themselves are real, drawn from Cooper’s extensive personal collection FIG. 2. Some are by Lynn’s real-life contemporaries, while others are attributed to Lynn herself but are actually the work of other artists. For example, Lynn posts a card to her mother that she describes as ‘a Gillian Wearing postcard which I’ve altered by rubbing out the message written on an A4 piece of paper by the man holding it up’ (p.94). The postcard in question is in fact from an ongoing series by the artist Duncan Wooldridge, which he begun in 2007 FIG. 3.

In a key turning point, early in the novel and Lynn’s career, she gets a job as Susan Hiller’s assistant, helping to produce Hiller’s work From the Freud Museum (1991–96). The artist remains a pivotal figure for Lynn and traces of her approach can be seen in Lynn’s later career as a successful film and installation artist FIG. 4. For instance, the most significant artwork attributed to her character is Nowhere Less Now – a filmic installation that was, in reality, created in 2012 by the artist Lindsay Seers, who is named in the novel as Lynn’s best friend FIG. 5. The piece weaves together narratives of family history, seafaring and migration through the use of sculpture, photography, video and animation. Lynn writes to her mother: ‘Nowhere Less Now may be the best thing I’ve ever done. Strange that elements of Susan’s extra-sensual perception, which I wasn’t aware of much admiring when I was her studio assistant, have emerged in the film element of this piece’ (p.204).

For readers – especially those who are primarily familiar with the YBAs as mainstream household names rather than as young, radical art-market disrupters – Cooper’s insertion of a fictional character into history oscillates between seamless and jarring. Readers may find themselves forgetting that Lynn is a figment of the author’s imagination, or they might start to see her as a placeholder for Cooper himself, who undoubtedly draws extensively on his own first-hand experiences of the scenes described as well as his work as an art historian. However, a detailed description of an invented work of art or an anachronistic reference will suddenly disrupt the pseudo-reality, bringing the reader unceremoniously back to the realm of the fictional.

Although it perhaps takes some acclimatisation, this technique effectively serves to highlight the unreliability of history; textual representation always tells a biased story. When Lynn describes a press release about her work as ‘meaningless guff’ that ‘doesn’t relate in any sensible way’ to the films presented in her second solo show (p.74), it reminds us that such texts are the principal resource for learning about the works that have made it into the ‘canon’ of art history. Cooper questions the role of language in experiencing visual art, drawing attention to the gulf between the written description and the physical object. The novel contains multiple layers of ekphrasis; the fictional Lynn’s descriptions of real artists’ works sit uneasily alongside Cooper’s authorial presentation of Lynn's invented or misattributed films in the form of press releases and reviews. Such analyses, Cooper suggests, are always unreliable. The ratio of truth to fiction is never fixed, whether the context is a novel, a personal letter, a press release or a scholarly essay.

Beyond these forays into the artworld, the novel primarily explores the relationship between Lynn and her mother, which is often fraught. Lynn’s letters intimate that her childhood was difficult, growing up around a series of her mother’s no-good boyfriends and at the mercy of her ‘mood swings’, which ‘came without warning or explanation’ (p.140). We see an element of this in her mother’s letters: one reads ‘Wow! Is that you?!! I’m impressed’ (p.91) but is then swiftly followed by a dismissive note rejecting Lynn’s attempt to relay information about her absent father: ‘Lynn. I really don’t want to hear any of this. Keep it to yourself, please, if you don’t mind’ (p.93). Equally, Lynn often lacks sympathy for her mother and writes to her in a patronising or dismissive tone. There are several indications that she is passionate about classical music and could have become a professional musician if she hadn’t been emotionally abused by her own mother. Success as a creative, Cooper implies, is as much about opportunity as personality or genius. But Lynn is unwilling to pick up on her mother’s musical intelligence, instead speaking repeatedly and self-indulgently about her own work and career. Lynn's flaws do not serve to make her an entirely likeable character, but they nevertheless ring true. The novel is full of silences of gaps, reminding us that we cannot fully understand the reasons for their estrangement or behaviour.

Cooper’s postcards take on a new significance in the context of this fictional framework. Early in the novel, Lynn’s mother reacts with horror over a video piece Lynn has made, which contains many details from Lynn’s childhood: ‘How dare you? All those personal things out in the open without asking my permission? You’ve got a nerve, girl. The cheek’ (pp.68–69). In response, Lynn sends a message on the back of a postcard that reads ‘Dance with me, it’s not over’ (p.69) FIG. 6. Designed by Alan Aboud for the Terrence Higgins Trust in the 1990s, the card was originally part of a campaign devised to combat the stigma around AIDS. Here, it takes on a new set of meanings as part of Lynn’s attempt to heal the breach with her mother, while also locating their imagined correspondence within the real-life sociocultural context of the mid-90s.

The synthesis of fact and fiction is key to both Lynn’s artistic practice and to Cooper’s concerns as a novelist. Through the press releases and newspaper interviews Lynn encloses with her postcards, we discover that she frequently adopts alternative personae in her work or attributes parts of it to others. A text credited to Lynn and a number of other people – both real and fictional – notes Lynn’s interest in artistic ‘ventriloquism’: ‘Gallagher’s creativity declines the dichotomy of fact and fiction, because nothing seems to her entirely factual or entirely fictional. Fictional implies untrue and she is looking for the truth in things which supersede mere factuality’ (p.204).

Layers upon layers of ‘fictioning’ make Bolt from the Blue a nuanced and beautifully textured novel. Cooper’s text takes on a mercurial uncertainty, blurring the boundaries between author and subject, person and persona, and truth and falsehood. Versions of people and narratives emerge and re-emerge, coming together to present an incomplete image of how a relationship unfolds through time. 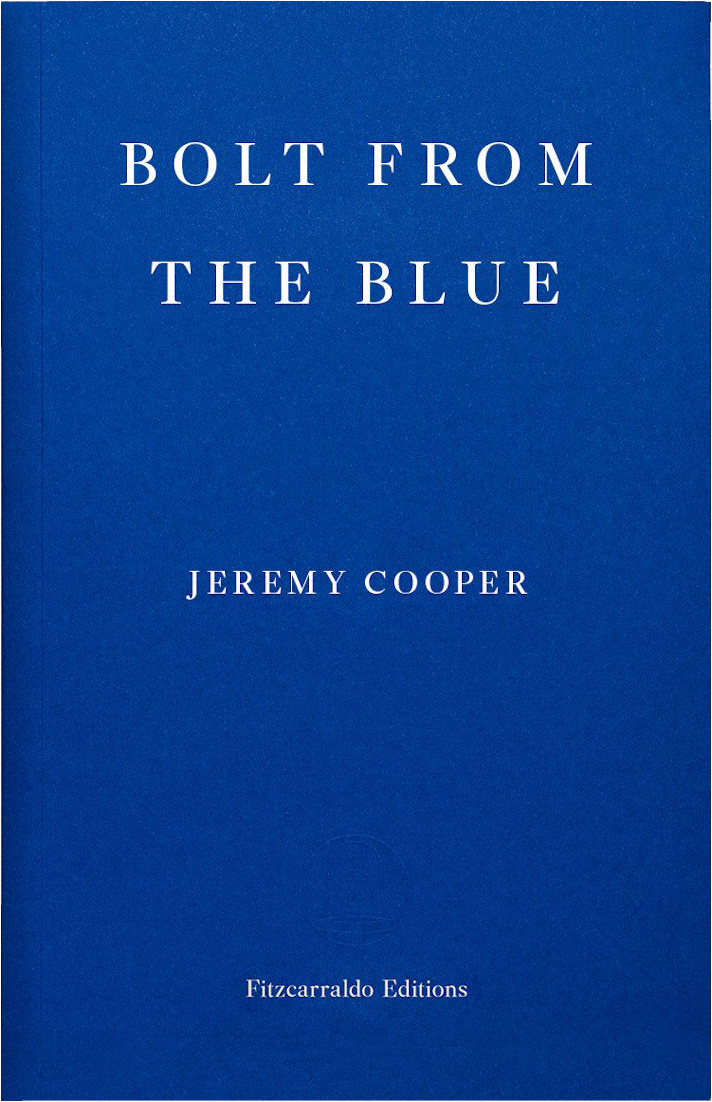 Bolt from the Blue

is a writer, researcher and curator currently based in Wiltshire. She writes fiction, essays and criticism.