A Countervailing Theory, a parable

At the end of the long sweep of Toyin Ojih Odutola’s exhibition in The Curve at the Barbican Art Gallery, London, is a wall text FIG. 1 FIG. 2. The text is placed by the exit doors, positioned at an angle as if to welcome visitors into the space rather than to catch their attention as they leave. Its incongruity is only heightened by the statement, which informs the reader that this exhibition is not an exhibition per se. Instead, it is described as a display of extraordinary archaeological findings from the Jos Plateau in Nigeria. In addition, the artist is cited as the Director of ‘Jos Plateau Research Initiative, University Ibadan, Postgraduate College, Nigeria’, who presents these works to offer ‘a countervailing theory’ that might ‘provide a more balanced, expanding narrative, challenging known empirical and historical records of the biodiversity and multiculturalism native to central Nigeria’.1

While the wall text relocates the viewer in the present after the total absorption demanded by the installation, it also extends the narrative that unfolds across the finely-rendered panels. Made up of approximately forty elements, Ojih Odutola's display comprises chalk and charcoal drawings on black panels of board and linen-covered Dibond FIG. 3. These are classified as digital scans of ‘black shale sheets’ with ‘peculiar pictographic markings’, recovered from a landscape of mined mineral deposits. Compositely, text and image evoke the form of a graphic novel in which we meet an unfamiliar people who are resident in the real-life landscape of the rocky Jos Plateau. Ojih Odutola’s performative statement is a second fictional conceit to that found in the works themselves, which paradoxically suggests that the story playing out across the panels is the truth ­– not a work of speculative fiction, but evidence of a lost civilisation, alien in some ways and familiar in others. This is not solely a countervailing theory of ‘biodiversity and multiculturalism’ in Nigeria, then, but a profound challenge to all empirical records in which power is striated. Here black women are masters over male subjects who are created, not born; lost plant species and rock formations interlace with the existing geology of the Jos Plateau; and histories are preserved in sequences of complex images that record labour, interaction and thought in intimate and abstract ways.

Ojih Odutola’s interest in fictional narratives is long-standing. Her 2017–18 exhibition To Wander Determined at the Whitney Museum of American Art, New York, was organised around the story of two aristocratic Nigerian families who are united in marriage FIG. 4. The artworks were derived and collated from their ‘collections’, overseen by Ojih Odutola as ‘Deputy Private Secretary’. The Whitney’s Assistant Curator Rujeko Hockley has described this series as a ‘modern-day odyssey that gradually reveals itself through fragmented moments, restless and contemplative glances, and a series of lightly veiled visual clues’.2  As in A Countervailing Theory, the traditional grand arc of violence, heroism and resolution was displaced in this work. In its place, To Wander Determined instead portrayed subtle fictional characters who exist in a world of wealth and privilege. Ojih Odutola’s narrative suggested these families have long, unbroken lineages with strong women at their centre, who are accepting of same-sex marriage. Through this, the series presented its own countervailing narrative ­– one in which the privations of slavery and empire did not take place, where patriarchy is not institutionalised and same-sex marriage or cohabitation are not illegal, as they currently are in Nigeria. As a consequence, it might be tempting to say that Ojih Odutola’s worlds are hopeful alternatives: the speculative product of ‘what if?’ rendered in intimate detail. This might associate her with other artists and artist collectives who, over the past few decades, have invoked historical, anthropological, archaeological or archival modes to rediscover and recontextualise, as well as to narrate and to speculate ­– towards the privileging of the minor over the master narrative, and the unequivocal undermining of the truth of History.

Importantly though, Ojih Odutola’s narratives are not locked in idealism. They are closer to parables than descriptions of potential futures or reconstructions of violently supressed pasts. If A Wanderer Determined describes a world where the persecution of gender and sexual differences are overturned, then it is still one in which wealth and power are braided together and sustained through genealogy. A Countervailing Theory presents an even clearer lesson traced across its blackboard-like panels. In the story within the story, the two central protagonists, Akanke, of the ruling Eshu FIG. 5, and Aldo, of the labouring Koba, begin to overcome their respective social statuses to listen to each other. They meet each other as equals, sharing in an act of cunnilingus as depicted in Accepting Impermanence FIG. 6. But this mutual recognition is not enough to save Aldo after he is falsely accused of murdering another Eshu; Akanke leaves him to be executed, later realising she is pregnant with twins. In her telling of this story in the accompanying book, Ojih Odutola emphasises that Akanke and Aldo’s coming together could ‘bring the whole system down. But they fail’.3  As such, the artist extricates the parable from identity or history and refocuses it on the corrupting dynamics of power, which is shown to be the unquestioned foundation of this civilisation.

The clarity of the parable form finds a parallel in the monochromatic works that make up A Countervailing Theory. Both humans and landscape are described with shading and blending, although the black of the background is never completely worked over – it remains to mark the striations on the bodies of the Eshu and the Koba FIG. 7, elements of the landscape and the shadows of the figures, which according to Ojih Odutola’s narrative represent the consciousness of her characters. The interrelation between fore and background and between chalk and charcoal also structures the relationship between the depicted bodies and their landscape. They are interconnected – made from the same stuff – and the use of charcoal and chalk mirrors the unknown substances being mined in the images.

There is a temptation to read Ojih Odutola’s formal choices as simple role reversals, such as the fact that it is the women who form the ruling elite and the idea of the countervailing theory itself. However, distinctions – figure and ground, form and content – seem to erode, while lines, layers and levels proliferate, so that the narrative insistently pushes to the fore, even as the velvety texture of the images and accompanying soundscape, Ceremonies Within by Peter Adjaye, almost absorbs the viewer. Perhaps this is the force of the parable in tension with the seductive possibilities of fiction. Perhaps it brings a different spin to the idea of a countervailing theory: no longer the restoration of a lost balance, but a lesson in the precarity of balance and revolutionary struggle. The double fiction that frames the exhibition insists on the viewer’s relationship to an otherwise distant narrative. As the wall text reads: ‘We appreciate and welcome all those who are willing to engage in this fascinating discovery with us, despite not knowing the full extent of its meaning’. Ojih Odutola offers us an invitation to re-engage with the violence of history and to learn from a parable about power. 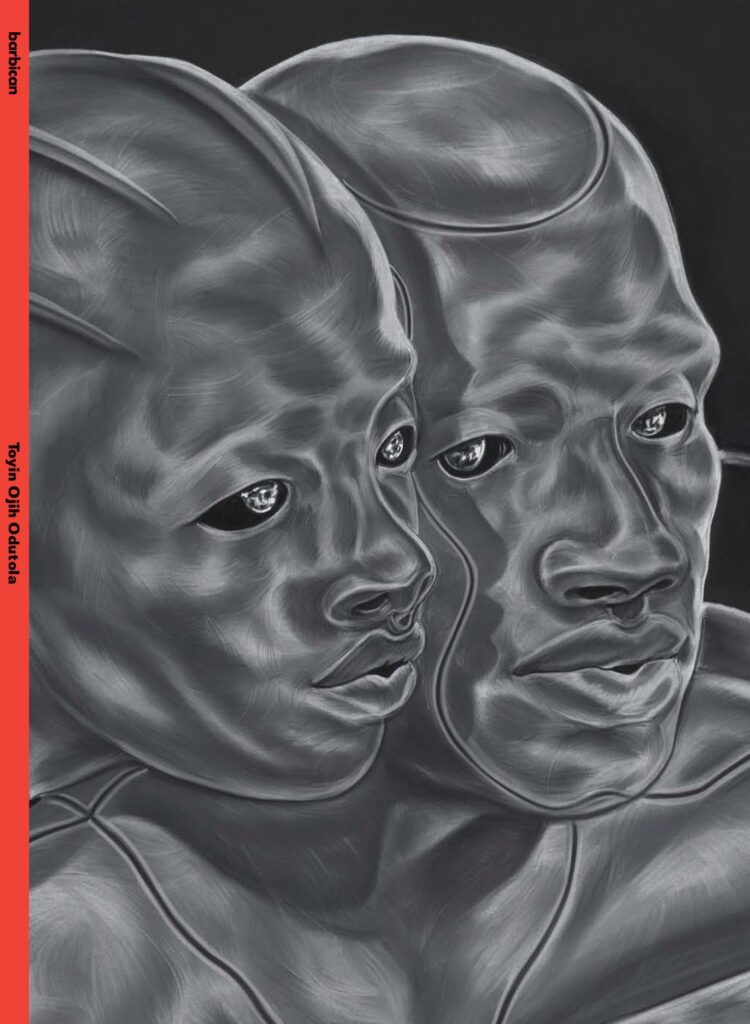