The thousand episodes the mind enjoys: Bernadette and Rosemary Mayer

In 1971 the poet Bernadette Mayer undertook a conceptual project to record a month of her life – July 1971 – in photographs and text. The same year, her sister, the artist Rosemary Mayer, continued to document her thoughts, feelings and working processes in her private journal. 1971 was a significant year for Rosemary. It was her first living alone after the end of her marriage to Vito Acconci, when she was refocusing on her artmaking, and it was the year she began attending feminist meetings with other artists, including Adrian Piper and Donna Dennis, as well as her sister. This year sees the publication of a new edition of excerpts from Rosemary’s journal of that year, and of Bernadette’s book Memory, making it possible for the first time to read the sisters’ simultaneous autobiographical accounts.

The interest in the Mayers is not sudden. Bernadette is a legend of New York poetry: an influential teacher and publisher, she has long been sought out, with her contemporary Alice Notley, for her relentless explorations of pregnancy, motherhood, parenting and other aspects of daily life. As Notley performatively demonstrated in a text of 1980 on the genealogy of American poetry, herself and Bernadette are ‘Doctor Williams’ Heiresses’, referring to that poet of everyday life par excellence, William Carlos Williams.1 The beginning of Notley’s essay – a rewriting of Hesiod’s Theogony – situates the two heiresses in a lineage from Emily Dickinson and Walt Whitman, linking them as sisters with the shared parentage of Williams and Gertrude Stein. While Bernadette’s place in American poetry’s cosmogony has long been established, Rosemary’s place in the 1970s New York art world has been obscured. Her contributions to feminist activism through her membership of A.I.R. Gallery, her art criticism and writing, as well as her work in sculpture, event-making, drawing and artist’s books has slipped between art-historical categories. Yet, Rosemary’s work established its own cosmogony of classical female figures, personified in sculptures made of twisted, knotted and hanging bolts of fabric FIG. 1, or bamboo sticks and vines of plastic or snow.  Sometimes her work was temporary, but it could also be big, grand and baroque. Her absence from art history is perhaps because she is not easily assimilable to conceptual or process art: she is no one’s obvious heiress, although recent exhibitions have sought to address this, including Nick Mauss’s Bizarre Silks, Private Imaginings and Narrative Facts, etc at Kunsthalle Basel, which places Mayer’s work in conversation with Ketty La Rocca and Gretchen Bender FIG. 2, among others. Nor is she an obvious artistic peer of her immediate circle, including Acconci or Piper. In Rosemary’s diary we read of Piper’s tough critiques of Mayer’s work:

Talking to Adrian abt. the clash of brutal paint surfaces with lovely fabrics. She said how that’s me – that my urge to make a middle ground is really not a good idea – I ought to accept the hard brutal parts of me.2

Mayer also wrote: ‘I wish I knew some people who made things’, tellingly admitting her frustration with conceptualism and its attendant dematerialisation.3

Rosemary’s diary, edited by her niece Marie Warsh, is a document of frustration and of not fitting in. It has many of the common conceits of artistic subjectivity: poverty, boredom and dead ends, combined with the barest descriptions of despondency, dereliction and depression. Mayer notes the weather and its effects on her; of her attempts at organisation and the successes and failures of carrying out these plans; of making work; of planning to make work; and of acquiring materials. She talks about television, films, books, food (a lot), shitting (less) and toothache. She tries to take up yoga. She talks of desire and its absence; she describes falling in love. The text is a document of her honest and rich friendships with Acconci and Piper, as well as her getting to know and understand her consciousness-raising group. With this range of subjects, the diary approaches a description of a total life, exposing how it can all braid together unevenly: paragraphs working through a problem like love are balanced by a single sentence of insight into her work.

Some readers may be surprised how little discussion of artmaking there is in the pages of Rosemary’s diary, and some may question the value or propriety of reading so personal a document in so much detail. In the book’s introduction, Warsh explains her reasons for publishing a second edition of the diary.4 In relation to a letter from Sol Le Witt to the Museum of Modern Art, New York, which read: ‘Rosemary Mayer is a real artist’, Warsh writes:

Reflecting on the editing process for the first edition of Excerpts… I realise now that my intent was to show that Rosemary was indeed a real artist [. . .] I worried that her incessant expressions of self-doubt would turn people off. I decided to keep it short. But Rosemary’s struggles, which I was worried about sharing, were what readers responded to most.5

Mayer’s diary attests to a moment when the characteristics of a ‘real artist’ were in flux: the possibility and, still the difficulty, of being a woman and artist in 1971, a year before A.I.R. opened its doors in 1972; the experimentation and instability of post-medium art making and the need to invent a new language for it; the reliance on galleries for space to exhibit and for recognition, evidenced by Le Witt’s letter and Rosemary’s declarations that she wants to be a famous artist. There is also much that speaks to the economic, psychic and social realities of making art. The dailiness of Rosemary’s life FIG. 3 does not obscure the artist, rather, in this new edition with its fifty-six new or expanded entries, the category ‘real artist’ is allowed to transform, turned less to the institutionally legitimised announcement, but to the constant and uneasy imbrication of art and life.

The republication of Memory, also spearheaded by Warsh, presents us with a different approach to describing life, and to destabilising the character of the ‘real artist’. One of a number of Bernadette Mayer’s explorations of autobiography, Memory was originally conceived not as a book, but as an installation, realised as the inaugural exhibition at the Holly Solomon Gallery, New York, in February 1972. Solomon sponsored the project, paying the materials and processing costs of the rolls of film Bernadette shot daily. The exhibition included 1100 colour snapshots, and a six-hour reel-to-reel recording of an experimental text from Bernadette’s journal. This text was published in 1975 by North Atlantic Books, with eight of the photographs reproduced in black and white on the cover. The installation was restaged in 2016,6 but Lisa Pearson is the first editor to take on a publication of the full text and images, which runs to over three hundred pages.

The difference between reading Memory, as opposed to seeing it, is significant. In installation form the experience is overwhelming, and unless you could commit an entire day to listening to the audio, it is partial. As Bernadette writes of the project:

It’s astonishing to me that there is so much in Memory, yet so much is left out: emotions, thoughts, sex, the relationship between poetry and light, storytelling, walking, and voyaging to name a few. I thought by using sound and image, I could include everything, but so far, that is not so.7

The book transforms the experience of the work, splintering the dense text of the 1975 publication into days, interspersed with the correlating images in the configurations Mayer first established for the 1972 exhibition FIG. 4. Mayer’s photography is uneven, both in skill – Liz Kotz calls it ‘technically erratic’ – and in content.8 There is little formal composition in these images, some are snapshots of friends, some views of New York streets or Massachusetts countryside FIG. 5. There are also naked bodies sleeping, laundry, light bulbs FIG. 6, food markets and rubbish. Images are overexposed, underexposed, double exposed and out of focus. Many shots are repeated, as if Mayer wanted to record moments running together, although others shift suddenly between locations, or from day to night. The point for Mayer was not to record time, but to record the imprecision of experiencing time, to record memory. The photographs are stand-ins for the parts of things that stick in the mind. The text too, is full of found objects – including parts of speech or signage –that punctuate Mayer’s thoughts and observations.

The text does not explicate the images, although sometimes it lingers upon them, pointing out the ‘breasts’ produced when a friend raises his arms wearing a particular shirt, or the blue, ankle-laced espadrilles worn by a friend when they go sailing in Massachusetts. At other times it records more than the images can and Mayer speeds through thoughts connected by ampersands:

& an idea about transcription, off to the side
& some numbers, a theatre & service equipment
& some long division
& some copying
& a face a tree a girl with her head down the sun, marks, a head, an ax, an ax-flag
& food
& a photo of m & a note:9

Or she plays with words – ‘(the narrative cinema & sin ina & sin m.a.) reprisal’ – to create reverberations of meaning (p.104). Pearson describes the combinations of Mayer’s writing as metamorphising from ‘quotidian minutiae’ to the ‘lyrical as her stream of consciousness becomes incantory’.10 The combination of text and image here generates an atmosphere that is just about captured, to the extent that you realise that you can never fully experience it. This accumulation of material aims for accuracy, to hold, as Mayer describes in her 1976 autobiographical text A Piece of Cake, ‘the thousand episodes the mind enjoys’.

Mayer’s attempt to record everything draws a strange parallel with the relentlessness of our contemporary culture of representation. Mayer acknowledges her idea that a ‘computer or device that could record everything you think or see, even for a single day [. . .] would make an interesting piece of language/ information’, is now warped, ‘since everything that becomes popular is a very small part of the experience of being human, as if it were all too much for us’.11 Despite the possibility of our recording devices, she suggests, we create too a narrow stream of episodes, leaving out all that is difficult, ordinary or messy. Her Memory, she says, is a ‘loosening part’ in understanding the mechanics and the possibilities of perception.

Rosemary, too, is concerned with perception. Her work destabilises systems of conceptual art, as well as the empiricism of visual representation. The experiments in fabric sculptures described and illustrated in Excerpts sought to capture colour, line and form tangentially, as if on the verge of evanescence. She also experimented with finding a language for her work, exploring classical and historical texts for the names of lost women to title her work, writing spells and translating the diaries of the Mannerist painter Jacopo Pontormo (1494–1557).

It can be hard to look at members of the same family together, especially siblings who work between the fields of art and literature. But Bernadette’s and Rosemary’s creative practices are usefully discordant, their joint unruliness – their boundary pushing, as Rosemary might say – asks us to loosen our categories, to be more precise in our descriptions of artistic lives. These publications occupy distinct registers: Excerpts is a diary that captures life as it is experienced, whereas Memory is a work of experimental writing that seeks to stretch experience so that language can hold it and vice versa. Their work is connected through shared interests in atmosphere and effect, word and image, life and remembering. This was a lifelong concern for them both, as Bernadette’s childhood reminiscence of her sister elucidates: ‘Though this was before Conceptual art, Rosemary carved her initials in the furniture and then changed them to mine so I’d get blamed. It worked’.12 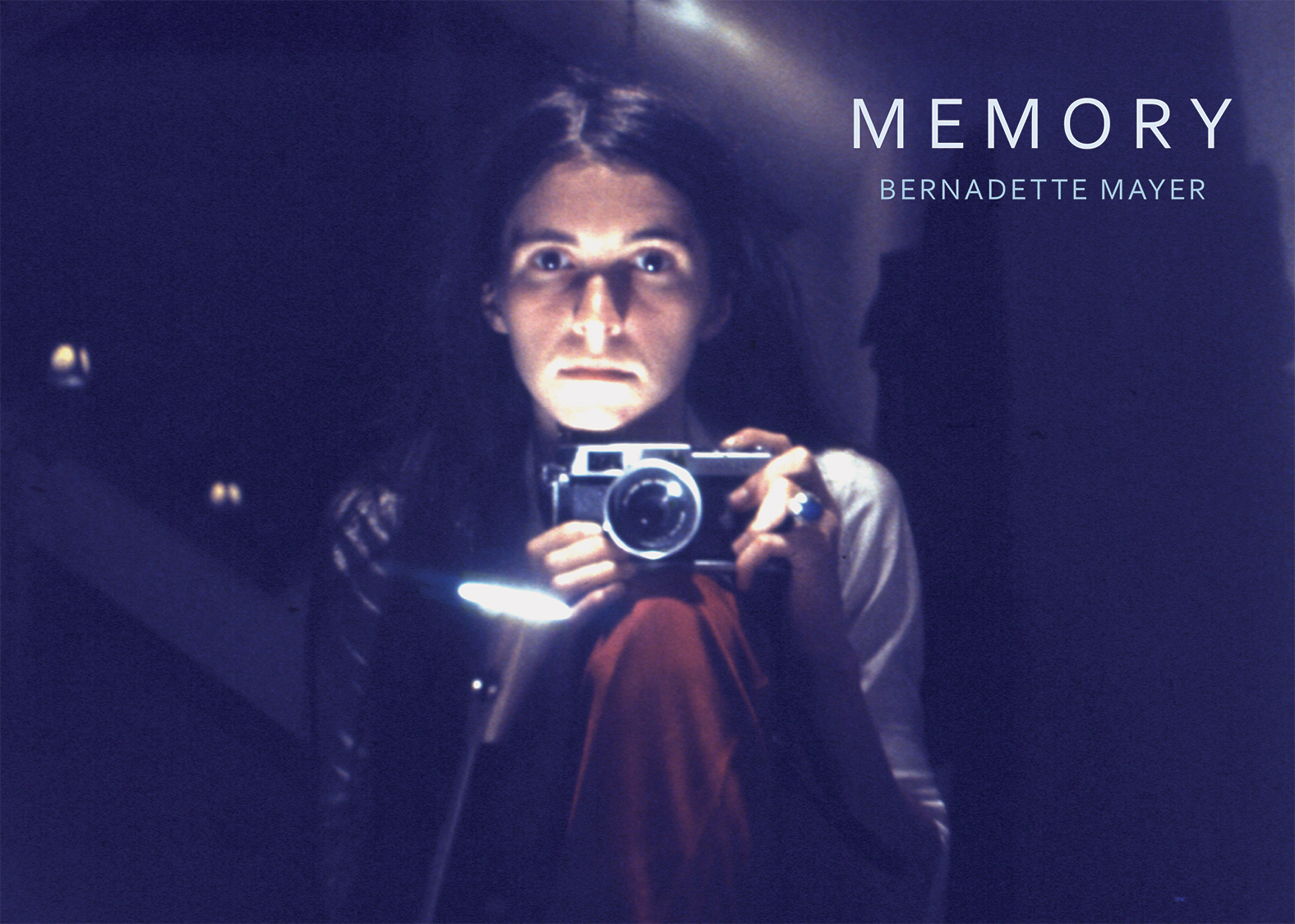 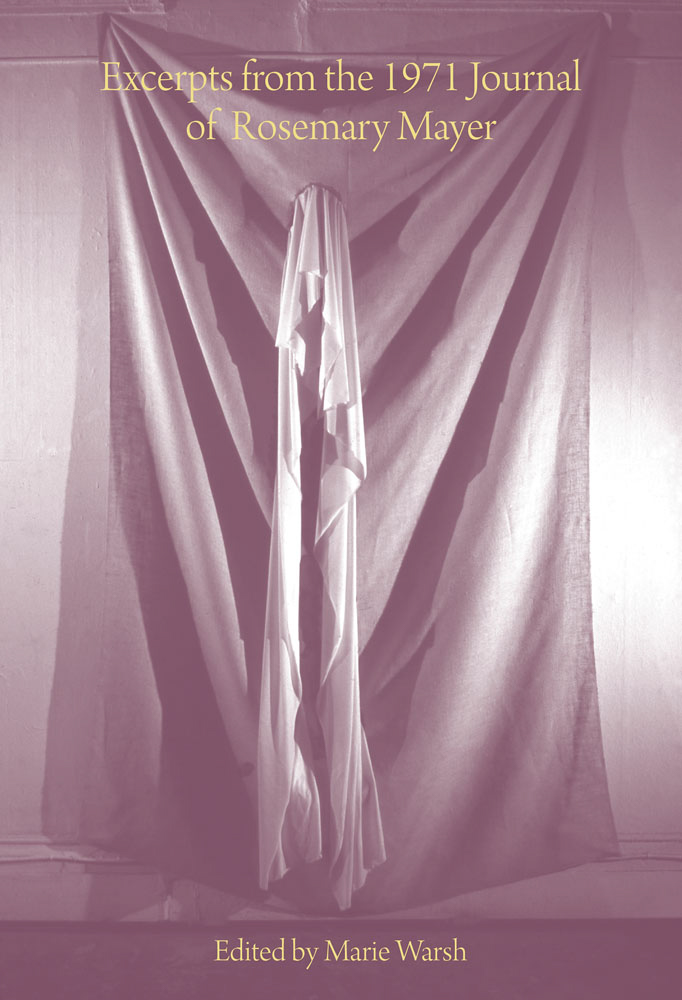 Excerpts from the 1971 Journal of Rosemary Mayer 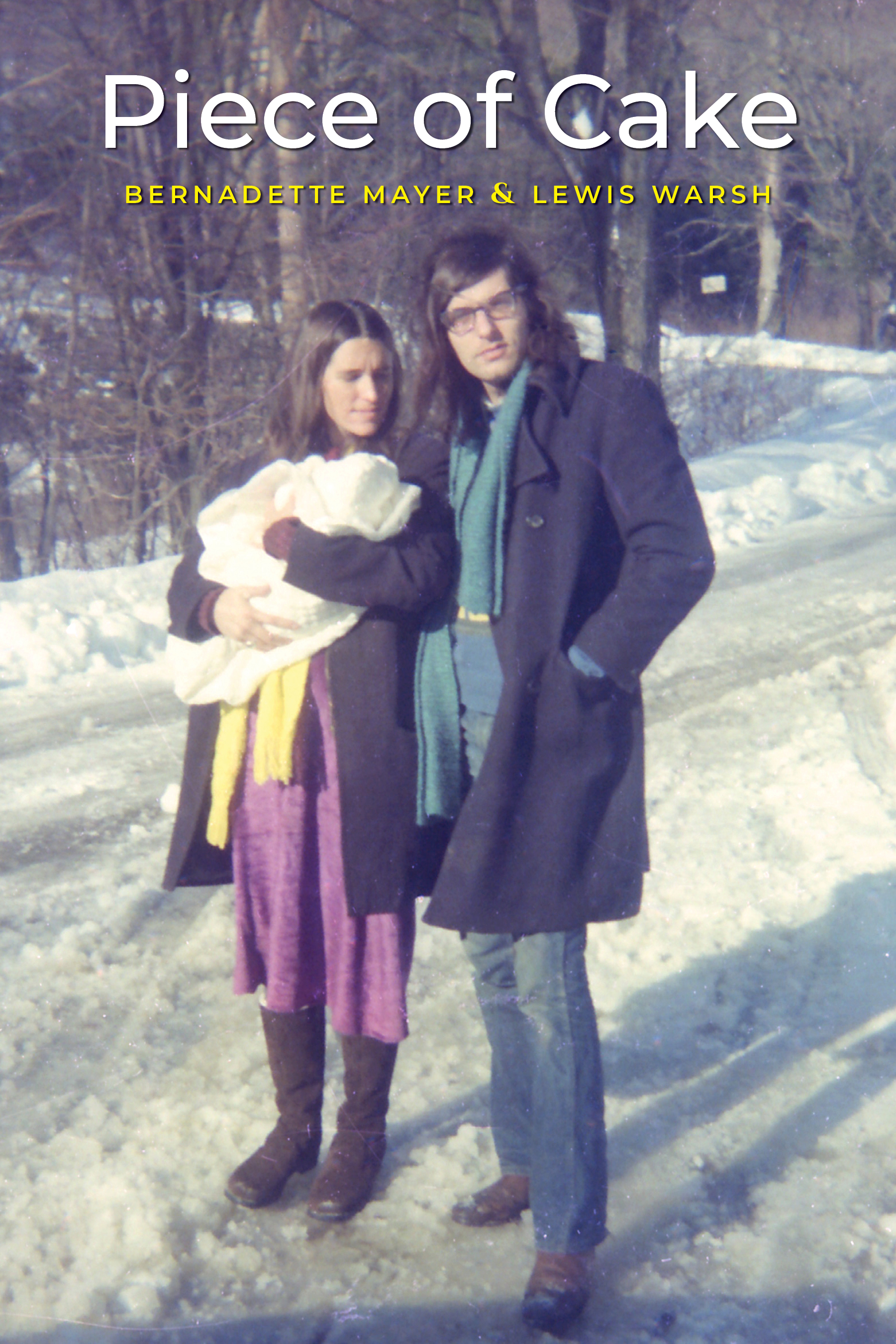 A Piece of Cake

By Bernadette Mayer and Lewis Warsh