A critic once defined John Coplans (1920–2003) as ‘the Columbus of rot, the Vespucci of dissipation, on a voyage to discover something too painfully close to home’.1 Others were more temperate in their descriptions of Coplans’s photographs of his naked body, which he began making in 1984 at the age of sixty-four. Martin Herbert saw them as an exploration of how the human body ‘is imprinted by time’.2 Grace Glueck wrote that when Coplans – after a prolific career as an educator, museum curator and founder and editor of Artforum – began his photographic practice, he was ‘well aware that aged bodies are not the most riveting camera subjects in our youth-cult society’.3 In her obituary of Coplans, Roberta Smith perhaps best articulated the ways in which his detailed images evoke uncanny and faraway non-bodily elements as he transformed himself into ‘abstract forms resembling strange animals, primitive art, colossal rocks or Henry-Moore-like sculptures’.4

Coplans’s depiction of the ageing body and the alienation that this can engender has long dominated critical and scholarly interest in his œuvre. The exhibition La vie des formes at Le Point du Jour, Cherbourg-en-Cotentin, which has travelled from the Fondation Henri Cartier Bresson, Paris, offers a different point of entry into the artist’s work.5 The exhibition materials ascribe a ‘lighter, more universal ambition’ to his images, a sentiment that falls more closely in line with the way Coplans himself spoke of his decades-long project.6 In a short text written in 2002 he described his process of bodily contortion and ‘beheading’ – leaving his head out of the frame – as a way to make his physicality ‘like any other man’s’.7 He stated that ‘nakedness removes the body from the specificity of time: unclothed, it belongs to the past, present, and future’.8 The curators of this retrospective – Jean-François Chevrier and Élia Pijollet – thereby propose a reframing of Coplans’s photographs, striving to elicit feelings of universality rather than alienation in a twenty-first-century audience.

In La vie des formes Coplans’s unflinching images of split nails, crevassed skin, calloused feet, varicose veins, crumbly scabs, unruly body hair and great expanses of sagging flesh are organised into three sections. The first focuses on the small-format photographs Coplans made at the beginning of his artistic practice in the 1980s. With the help of an assistant, he photographed himself body part by body part, focusing on his hands FIG. 1, feet, knees, torso FIG. 2 and back, his penis and scrotum sometimes dangling into the frame. The second section of the exhibition examines his large-scale work, in which he expanded upon the intimate format of his early pieces until they took on the panoramic scale of landscape photography. Also included here are works from his last series, which combines separate frames to compose a body of misaligned parts – a montage of fragmentation and movement FIG. 3. The third section brings together works by artists that Coplans studied, exhibited, published or knew personally, including Lee Friedlander, Jan Groover, Walker Evans and Weegee, demonstrating the cosmos of influences in which Coplans situated himself.

Several diptychs and triptychs in the exhibition recall the structure of devotional paintings from the Middle Ages and the Renaissance. In some, a single image of a body part, such as a foot, is cut into several panels. Upside Down No.1 FIG. 4, for example, shows Coplans’s body inverted, like St Peter crucified on the cross, while the horizontal orientation of his body in Lying Figure, Holding Leg, Four Panels FIG. 5 evokes Hans Holbein’s painting The Body of The Dead Christ in The Tomb (1520–22; Kunstmuseum, Basel). In these composite works, the viewer is forced to ‘fill in’ the divisional white space sectioning the artist’s body in order to make it whole. This fragmentation can be viewed as a violent dismemberment, but it can also be considered, more positively, as an expansion, which the exhibition title – the life of forms – may point towards. By leaving the most expressive part of his body out of the frame – his face – Coplans was perhaps seeking an equivalent vehicle for communication and interiority in the rest of his body.

The fragmentation of the body has a long history in religion; medieval reliquaries in particular were often made to house fragments of sacred bodies for veneration. According to the scholars Caroline Walker Bynum and Paula Gerson, in the early to late fourth century, ‘the fragments of martyrs had come to be revered as loci of power and special access to the divine’.9 The fragmentation of the body as a complex locus of power is also ubiquitous in contemporary art, which could be seen as a response to the prevalence of fashion photographs and adverts showing solitary bejeweled fingers or shoe-clad legs. Coplans’s contemporaries – Louise Bourgeois and Robert Gober, for example – employed the fragment as a device to render suspect the very notion of a coherent, unified body. In Gober’s and Bourgeois’s sculptures, the body in pieces shatters confining notions of gender and sexuality, instead representing psychological ambivalence and pain.

Coplans was, however, well aware that the visual division of the human body was not only metaphorical, but also referenced the reality of violence and death. In the exhibition catalogue for A Self Portrait at MoMA PS1, New York, Coplans recounted a story about his father, a doctor who survived an explosion at the Somme. In his will, he exhorted his son to cremate his body and divide his ashes up ‘like packaged cocaine’, so that it could be deposited in ‘all kinds of interesting places all around the world’ from the Taj Mahal to Westminster Abbey.10 The act of dividing up the body forces attention on its constituent parts. Coplans’s fragmentation of his body transforms it into what it is not, hardening it into a boulder, for example, or twisting it into the shape of a comma. This process presents a scene of vanished wholeness, but in Coplans’s images, the ageing body is less a site of mournful alienation than a potential vector for transcendence and communion. 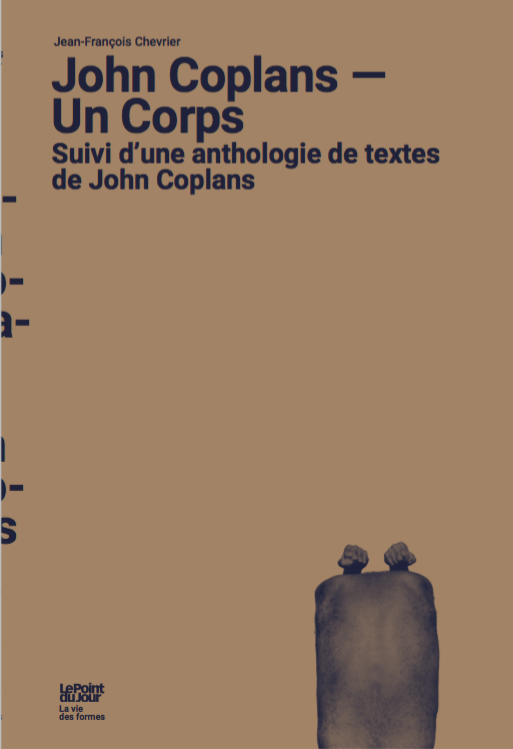 is a writer based in London.