Freedom and constraint at the Whitney Biennial

The title of the eightieth Whitney Biennial (the third held in their waterfront building in Manhattan’s Meatpacking District), Quiet as It’s Kept, is a colloquialism that typically means: keep what I am about to say secret, do not say a word. It has been invoked in the work of the jazz drummer Max Roach, the artist David Hammons and the writer Toni Morrison, in her novel The Bluest Eye (1970), which tells the story of an African American girl from an abusive home in 1940s Ohio. Perhaps surprising for such a large-scale event, it is a title that engenders a form of conspiratorial intimacy between exhibition and viewer. And we all know what is being shared. After two years of the COVID-19 pandemic, lockdowns, mortalities and protocols that have torn at the social fabric, this biennial whispers to its audience: we want it to be over, we want to be free, but how do we make sense of it all?

The curators David Breslin and Adrienne Edwards have created an exhibition that meditates on freedom and constraint in the United States over the past two years. The sixty-three artists included respond to a wide range of subjects. Apart from a surprising number of historical homages, the selected work is rooted in recent and ongoing sociopolitical crises: the prevention of asylum seekers entering the United States at the El Chaparral border crossing in Tijuana; the structural violence of racialised mass incarceration; and the claustrophobia we experienced in our own homes as the pandemic spread across the globe. Borrowed from a 1968 concrete poem by N.H. Pritchard – who was part of the Umbra collective of predominantly African American writers based in Manhattan’s Lower East Side – Breslin and Edwards introduce the exhibition with a symbol: – ) ( –. This parenthetical construction is designed to infer several things: a motion of opening out rather than closing in, an interlude or interval, and how we gesture meaning without words. This simple combination of symbols, situated at the opening of the exhibition, appears to indicate that the limits of our language corresponds to the limits of our understanding of a world in incoherent disorder.

A series of Pritchard’s typewritten poems are included in the exhibition, presented adjacent to the three-channel video installation Three Songs FIG. 1 by the Diné artist Raven Chacon (b.1977), in which three Indigenous American women perform songs that they composed with the artist. They each sing in their mother tongues, accompanied only by a snare drum. Performed at sites on Navajo, Cherokee and Seminole lands where massacres of their respective tribes took place, these songs lyrically connect the history of colonial genocide and forced displacement with the sonorous poetry of personal pain. It is a profoundly meditative work.

This is a biennial as much about the failure of language to make sense of crisis as it is about the histories of shifting demographics of the United States – perhaps also referenced in the inclusion of bilingual exhibition material, which is in English and Spanish. ‘Rather than offering a unified theme’, the curators state in their introduction, ‘we pursue a series of hunches throughout the exhibition’.1 Indeed, this does appear to be a survey exhibition informed more by intuition than palpable design. It is presented across two principal floors in completely different environments: the first of these is flooded with light, as free-standing panels create a luminous and open sweep of space, whereas the second is set in near-darkness – a crypt-like space in which images of the monstrous undead proliferate. Daniel Joseph Martinez (b.1957), who contributed to the 2008 Biennial, does so again here with five self-portrait photographs FIG. 2 as pop-cultural, posthuman antiheroes, including Frankenstein’s monster, Count Dracula from the film Nosferatu the Vampyre (1979) and the Alien Bounty Hunter from The X-Files (1993–2002).

Martinez has disfigured and degraded his body in an unnervingly humorous way, which, according to the exhibition wall text, bears ‘witness to the extraordinary moment in human history, our own self-destruction’. Although other works explore similar apocalyptic themes, they lack such incisiveness. For example, Isle of Vitr∴ous by WangShui (b.1986), an installation of generative adversarial networks (GANs), LED panels and light sensors shown alongside two oil paintings FIG. 3, registers as vague, indicating that the conceptual art of the ‘posthuman’, in both its emancipatory and critical manifestations, has a long way to go. This floor is a return to the gothic in a labyrinth of antechambers and alcoves, with black floors and black walls that foster a suffocating atmosphere in which the human, as we know it, might not make it out alive.

By contrast, downstairs, in an illuminated expanse, there are several radiating works that reward sustained attention from the viewer. The free-hanging paintings in Lisa Alvarado’s (b.1982) installation Vibratory Cartography: Nepantla FIG. 4, which depict geometries in fierce primary colours, respond to Gloria Anzaldúa’s theory of nepantla, the Nahuatl word meaning ‘in-between’. Alvarado’s paintings reflect on the repressive migration policies of the United States-Mexico border by recalling the rich traditions of public mural painting, as well as the textiles of her family’s experiences of migrant farm labour and the expulsions of the Mexican Repatriation. These works were made in 2020, at ‘a moment of transition, where geomagnetic orientation and migratory compasses are out of balance, borders are restricted, and many are displaced’.2 The process of abstraction is vital to this edition of the biennial and is evident in the standout works. Whether employed by the Omaskêko Cree artist Duane Linklater (b.1976) in his lavishly textured tapestries or Denyse Thomasos (1964–2012) in the black-and-white mural-size canvas Displaced Burial/Burial at Gorée FIG. 5, abstraction is a key tool in communicating the experience of feeling overwhelmed by urban environments that are decentred from human scale.

The vast, open space means that a rich variety of media can be placed in fruitful dialogue. A Clockwork FIG. 6 by Sable Elyse Smith (b.1986) is a large-scale Ferris wheel with flush edges and a polished finish, which has been constructed from the aluminium tables and chairs used in prison visiting rooms. A structure associated with the slow leisure of childhood, of Sunday ease and idleness, here becomes a nightmarish vision of the daily purgatory of mass incarceration. Existing somewhere between an hourless, handless clockface and the Sisyphus myth reworked for the carceral-industrial-complex, A Clockwork transports us to a place of captivity and inestimable waiting.

Other works on this floor engage with individual experiences of restriction and autonomy after years of welfare austerity that underlines the state’s disdain for the vulnerable. In Kitchen FIG. 7, Emily Barker (b.1992) – one of several artists under thirty to make their Whitney Biennial debut – has constructed a translucent installation of old-fashioned, standardised kitchen units in PET plastic. The countertop looms five feet and nine inches high, roughly the average height of an American man, and renders the use of these surfaces impossible. This is a translation of Barker’s own experiences as a wheelchair user, and how they are forced to experience their kitchen as a non-functional space, making it a site of daily struggle. Nearby, a stack of 7,865 papers is displayed, composed of bills from a one year-period relating to Barker’s spinal cord injury and chronic pain management. By way of sheer accumulation, it evidences the brutality of medical debt in the United States.

In the light-filled exhibition floor, weaker works also emerge alongside these pieces. Curators of biennials can be particularly amenable to inclusions that seem, superficially at least, to appeal to the tenor of the times but infringe on the political subtlety of the exhibition’s wider ethos. This biennial, in its eclecticism and adventure, largely resists such a temptation, however the prevalence of video art necessarily serves to emphasises the moving image works that are bludgeoned by the banal social-mediatisation of political critique. La horda (The horde) FIG. 8 by Andrew Roberts (b.1995) – the youngest artist in the exhibition – is an eight-channel video installation that depicts the precariat as bruised and dehumanised monsters in rudimentary CGI. We identify them by their corporate uniforms: Amazon, Uber Eats, Walmart, Netflix. The work can be read as an anti-capitalist companion piece to the posthuman disfigurements of Martinez upstairs. Roberts’s ambition might be to propose a scenario in which the main labour force of the future realises its own class consciousness, but all we have here are flat zombies – mindless, agentless, undead – who are represented without a future, stripped as they are of the means to free themselves from the debilitating gig economy.

This biennial will likely be remembered as the post-plague Whitney Biennial, however it is too simplistic to state that these works collectively speak to these conditions. Instead, they remind us that, far from a state of exception, the pandemic and subsequent lockdowns were crises among many that have, at times, displaced, imprisoned or killed people deemed more expendable than others. Throughout this exhibition, it is this open secret that rings out at fever pitch.

Whitney Biennial 2022: Quiet as It's Kept 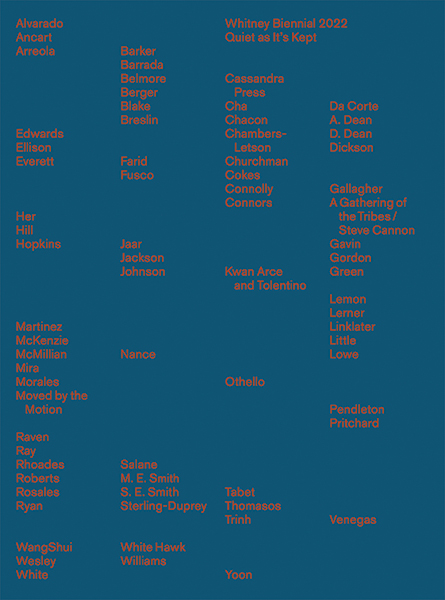 Whitney Biennial 2022: Quiet as It's Kept

is a writer and critic. He is currently writing a book about the poet Frank O’Hara and curatorial history.