Sunil Gupta’s retrospective at the Photographers’ Gallery, London, features a wide range of rarely shown works by this key contributor to the development of Black and queer aesthetics over the last five decades.1 Gupta’s photography is a thoroughly embedded practice, shaped by a life lived between Delhi, Montréal, New York and London, and devoted to capturing the chance juxtapositions and moments of beauty offered up by the world.

In his book Decolonising the Camera: Photography in Racial Time (2019), Mark Sealy, the curator of the exhibition, describes the work of the Nigerian-born photographer Rotimi Fani-Kayode, one of Gupta’s contemporaries and a fellow member of Autograph – the Association of Black Photographers (ABP) – in the 1980s, as gesturing toward a ‘different world’, one in which ‘desire and fantasy can roam freely, unfixed from the burden of culture and history’.2 Referring to Fani-Kayode’s Golden Phallus (1988–89), which depicts a seated black man wearing a bright white commedia dell’arte mask, his penis painted gold and suspended on a white piece of string, Sealy notes that the work is indicative of the artist’s broader photographic exploration of a realm ‘that is inherently and ideologically different’ to our own postcolonial scene.3 Gupta’s work is similarly concerned with pleasure, but resolutely of our world as he encounters it.4

Gupta has continually explored how photographs can challenge the prevailing cultural invisibility of his social and political milieu as an Indian gay man, active in the gay liberation movement in Montréal following his family’s emigration to Canada in 1969, and participating in Black cultural activism and nascent AIDS and queer activism in Britain after his relocation to London in 1977. It would, however, be a mistake to read his work as biographical, for Gupta’s project has always been directed at the gallery as a political space, aiming to remake art into a realm capable of celebrating illicit and subaltern desire. This exhibition emphasises the profound challenge of Gupta’s work to the historical institution of photography.

The lift doors open on the fifth floor to reveal sixty black-and-white photographs that make up Christopher Street, Gupta’s famous first series documenting the newly open, post-Stonewall gay community on the streets of the West Village in New York, taken when he was studying photography at the New School in 1976 FIG. 1. Certain pictures in this series have tended to become emblematic of the whole; to see these interspersed with images of Manhattan’s coiffured ‘ladies who lunch’, laden with dry cleaning or Macy’s bags, reminds us that gay liberation as a new practice of open living in the 1970s was thoroughly rooted in the wider context of the idiosyncratic urban landscape of New York.

Sealy counterpoints this series with earlier snapshots dotted along the opposite walls, which document Gupta’s circle as a young gay man involved in political activism in Montréal. The status of these images – retroactively grouped ‘Friends & Lovers, 1970–1972’ – as archival records or artistic interventions is unclear and deliberately so. A small selection of staged photographs produced for Reflections of the Black Experience, a group exhibition at the Brixton Art Gallery in 1986, completes this space.5 Gupta credits this show as bringing his photographic work in touch with local left-wing politics and grassroots activism in London. Offering multiple origin stories for the artist, this first room of five shows Gupta’s practice as shaped by social and political engagement in a succession of contexts, placing pressure on the distinction between artistic and archival practice.

Sealy develops this disruptive game in the second space. The display shows several crucial series in which Gupta advanced his subtle subversion of documentary form including Towards an Indian Gay Image (1983) and Exiles FIG. 2 as well as Trespass (1992–95), an epic sequence of digitally montaged photomurals that explore the problem of ‘Europe’ through the experience of the Indian migrant, made as governments across Europe struggled to ratify the Maastricht Treaty.6 These works are offset by a central screen in the space showing Remembering Penny, a digital video to commemorate the artist’s mother, ‘made as a private memorial for friends and family who couldn’t attend her funeral in New Delhi’ in 2007. The footage of Penny carefully cooking roti in her kitchen is genuinely moving. Surrounded by images that include those marginalised or otherwise unable to appear, the video occupies an ambivalent position. This ‘private memorial’ was not made for gallery consumption, yet here it is noisily claiming space within the exhibition, a family album reframed to represent the reach of diasporic subjectivity beyond ‘Fortress Europe’ or any other singular national formation.

In the publication accompanying the exhibition Gupta repeats this strategy of converting archival ephemera into a work of art in its own right. A brief essay by Sealy emphasises that ‘the idea of family, be it imagined or real’ is at the core of the artist’s practice (just as Remembering Penny occupies the centre of the second space), and recounts his political formation in 1980s London alongside such other Black cultural producers and photographers as Monika Baker, Mumtaz Karimjee and Joy Gregory.7 The remainder of the book represents an extensive archive of ‘family’ photographs, letters and posters relating to political activism and exhibitions from the 1940s to the present, all captioned in Gupta’s hand. The book shows ‘the artist’ as an accretion of the personal and political contexts in which they live and work, rather than a figure of liberal individualism.

The second and final floor of the exhibition shows photographs from several of Gupta’s most beautiful series: posed pictures of London-based same-sex couples in their homes (Lovers: Ten Years On; 1984); compositions that juxtapose photographs of multi-racial gay and lesbian couples with brief lines of poetry speaking of ambivalence in love and fragments of black-and-white documentation of protests against Margaret Thatcher’s Section 28 (Pretended Family Relationships; 1988); and lush studio portraits of queer Indian men, women and transgender people, then living under Section 377 of the Indian Penal Code, a law introduced under British rule that criminalised sexual acts ‘against the law of nature’ FIG. 3. It is a joy to see Sun City FIG. 4 in full; a complex narrative sequence in rich colour, loosely based on Chris Marker's film La Jetée (1962), in which a queer Indian protagonist finds himself caught between a relationship with an affluent bourgeois Frenchman and a world of casual anonymous sex in the eponymous Parisian sauna famous for its oriental decoration.

Sun City concludes cryptically with two photographs, one showing the protagonist sitting with two other men in the sauna pool, illuminated through an ogee-trellis, looking askance as a third man descends into the water; the other shows his clothed body splayed out on a rooftop at the airport, his French lover looking on. The series both revels in the joy of representation and asks whither next for queer Indian subjectivity, particularly as it remained policed by Section 377, a legacy of European colonialism finally repealed in 2018. Gupta has written how he has ‘consistently searched for a gay Indian image’ in his practice,8 repeatedly returning to work through this problem; this exhibition reminds us that for Gupta photographic representation is exploratory and serves the aims of liberation rather than confinement. Upon his return to live in New Delhi in 2006, Gupta found a much more defiantly open queer culture than in the 1980s, one that he captured in The New Pre-Raphaelites and Mr Malhotra’s Party FIG. 5.

Other highlights include a digital reproduction of a tape-slide project from 1980, documenting the workers at the London-based helpline Gay Switchboard, and ‘Cock Crazy or Scared Stiff’, Tri-X Super 8 footage from 1991 of two Black gay men discussing safer sex practice while splashing in the bath, shot by Gupta and transferred to videotape for a Health Education Authority programme ‘Building Your Confidence’. Ed Webb-Ingall has provided a new edit here, demonstrating Gupta’s immersion in community cultural production in response to HIV/AIDS.

His own HIV positive diagnosis in 1995 informs the series From Here to Eternity, which lends its title to the show.On commission from Autograph, Gupta composed six diptychs, each showing one photograph of the artist’s body in a moving state of vulnerability FIG. 6, enclosed in domestic settings or at the doctor’s surgery, juxtaposed with photographs of the entrances to South London gay sex clubs and saunas. The series reframes the positive body as mediated by the artist’s hand and seems to ask how gay sexual culture of the consumerist 1990s might similarly take (political) control of its own material place in London’s urban landscape. Many of these venues have since closed, retroactively marking Gupta’s series an archival record of a culture displaced through gentrification.9

Leaving the Photographers’ Gallery, one is acutely aware of the now closed sauna Sweatbox across Ramillies Street, a reminder of the precarity of queer sexual culture caught in the crossfire of the COVID-19 pandemic and its political mismanagement. Gupta’s timely and far-reaching retrospective shows how the photographic sign can harness the power of the collective to resist historic forces of marginalisation and privation, taking delight in the pleasure and beauty of this place.

Sunil Gupta: From Here to Eternity 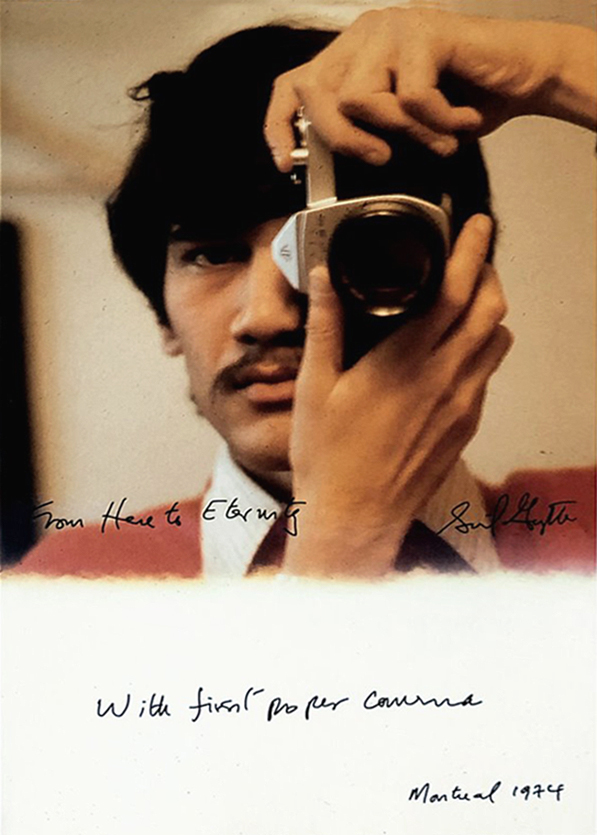 Sunil Gupta: From Here to Eternity

Autograph, in association with the Photographers' Gallery, London, and Ryerson Image Centre, Toronto, 2020