In a year marked by crises that have cultural institutions scrambling to reassert alliances and reposition their programmes, the 11th Berlin Biennale for Contemporary Art demonstrates a certain prescience in advance of the current global reckoning. Led by a team of female-identifying curators, whose slowed-down, local and polyvocal counterprogramming began in 2019 and presently takes place across four venues within the city’s ring road, the ‘epilogue’ of the Biennale gracefully manoeuvres a tired format and engages over seventy artists to coax viewers into consciousness of the social and spiritual nature of disasters.

This fourth and final chapter in the Biennale’s presentation focuses on the Global South, an interesting proposition for a nation whose beggar-thy-neighbour policies and imperial currency cultivate what the political activists Astra Taylor and David Adler, talking in April about the onset of the pandemic, described as an abiding sense of ‘public affluence based on exploitation’.1 By creating thematic exhibitions that emphasise dissonance and multiplicity – The Inverted Museum at Gropius Bau, The Antichurch at KW Institute for Contemporary Art, The Living Archive at ExRotaprint and Storefront for Dissident Bodies at daadgalerie – the curators make tangible the vast scale of environmental and social threats ranging from mining to censorship, as well as the implications for individuals suffering from unchecked loneliness, mental illness and trans- or homophobia.

At ExRotaPrint, Emma Howes, Justin Kennedy and Balz Isler’s sonic and text-based collaboration, UNFURL: a lucid sci-fi opera, combines headlines, mic drops, riffs, rants and annotations in a fierce statement with a small footprint about what it feels like to experience the world simultaneously from multiple positions, including non-binary and non-white ones. A column of words occupies the centre of an A4 pamphlet page: ‘I TRY TO / BE STILL / I TRY TO / BE NICE / I TRY TO / BE / THOUGHT / FUL / [. . .] BUT YOU / STEAL / ALL OF / MY BOUND-/ ARIES / AND EAT/ EM IN / FRONT/ OF ME / I’M ANGRY’. In the adjacent room, illustrated zines from the Berlin-based Feminist Healthcare Research Group offer up the collective’s ongoing research and point to the urgency of reimagining a biopolitics rooted in mutual care and personal exchange FIG. 1. Globalisation, the curators seem to emphasise, concerns not just political structures or geography but the fluid transmission of prejudice, greenhouse gases and disease.

A diverse public programme invites guests to un- and recentre their point(s) of view. Tours with themes such as ‘How to continue working?’, which addresses current art-world working conditions, and ‘Tandem Thursdays’, which encourage visitors to engage strangers in a one-to-one conversation, make a bid for the Biennale’s relevance as a means through which to unlearn some of the most toxic human patterns. Thoughtful curatorial choices such as steering visitors backwards through the otherwise highly directive, architecturally imposing Gropius Bau, cultivate an experience that insists on altering one’s trained way of thinking and moving. Partially illuminated displays emphasise a knowledge that is fragmented rather than complete, limited rather than omniscient. No matter how fragmented, works such as those from the Chilean Museo de la Solidaridad Salvador Allende, Santiago, an ‘international museum of resistance’ from the 1970s that has been partially reconstructed inside the venue, seem to suggest that we need to build power where we are FIG. 2. 2

Each of the four venues thrives on a combination of spectacular and more hermetic artistic positions, offering a reminder that both confrontation and refusal are transformative mechanisms. In the main exhibition hall of the KW Institute for Contemporary Art, the eschatology of Pedro Moraleida Bernardes finds form in a partial presentation of Faça Você Mesmo Sua Capela Sistina [Make Your Own Sistine Chapel], a series of paintings realised by the artist shortly before his death by suicide at the age of twenty-two FIG. 3. An assembly of framed paintings hangs from the ceiling. Three rectangles form a head between raised arms; horned orange figures fornicate among bare crucifixes; figures tumble past an opaque black background as part of the form’s narrow thorax and eventually, cross the threshold into a tail-like panel, which sinks forward like slouching legs. The work seems to collapse into the form of a crucified body, which presides over five large, black and white drawings by Argentinian artist Florencia Rodriguez Giles. The multi-panelled Biodelica (2018) depicts matriarchal utopias ignorant of a natural order. Flesh, organs, hair and teeth coalesce into sexual bodies amid a pastoral but deviant realm; fingers, split-hooves and dolphins’ noses plunge into orifices; the backs of the drawings are wrapped in puce-coloured silicone skins FIG. 4. Rather than invoking the obscene, Giles, like Bernardes, corrupts it. Rather than simply replaying colonialism’s religious legacy in South America, works like these distort and sidestep the colonizer’s gaze.

It is here in particular, alongside the swirling clarity of these positions exhibited in what are considered the most popular venues, that the Biennale’s ambiguous – if poetic – title shows its limits, recalling last year’s Venice Biennale’s also insufficient May You Live in Interesting Times. The title the crack begins within fails to resonate with works and feels like a missed opportunity to address the paradox of producing a biennial at a moment when globalisation clearly fails so many. If the organisers’ key question is, ‘Can patriarchal violence be purged from our collective bodies?’, the answer remains no. In spite of the transformation of the KW’s ground floor into an apse-like space by Giles and Moraleida, its physical centre remains tied to white patriarchy. Young-jun Tak’s sculpture Chained FIG. 5, crafted from ten life-sized statues of the crucifixion arranged in a circle on the floor and pasted with clippings from anti-LGBTQI propaganda collected from churches in South Korea, is presented ‘with thanks to’ Johann König, who was recently accused of reselling work by the artist Saâdane Afif at his own in-house art fair, to which Afif responded by writing an open letter.3

At Gropius Bau, a cohesive selection of works drawn from peripheries and centres of imperial resistance feels interrupted by curatorial concessions to safe themes. Linking the ideological affinities of Expressionist choreographer Dore Hoyer (1911–67) to a series of etchings by Käthe Kollwitz (1867–1965), Katarina Zdjelar’s four-channel video installation falls flat as it seeks to vivify historical layers of trauma but cannot avoid its white centredness in photographs, videos and gestures from Black and brown bodies. This foray into proto-feminist anti-fascism hangs unresolved amid illuminating examples of a more multivalent resistance, for example, from Castiel Vitorino Brasileiro, whose photographs consolidate and splinter the artist’s identity as a Black trans woman seen between viewer, shopkeeper and self. Brasileiro poses bare-chested for these portraits, concealing her face with masks bought in a shop that advertised their ‘African’ provenance FIG. 6.

This sense of a violent global culture that is both manufactured and authenticated through one’s own consumption of it underpins the exhibition at the Gropius Bau. In the venue’s opening gallery, Sandra Gamarra Heshiki’s elegies to the afterlives of looted objects undermine the notion of German ethnography as a study bound to ‘critical, rational, empirical [. . .] and universal’ Enlightenment principles.4  In The Museum of Ostracism (2018), Heshiki’s trompe l’œil paintings of pre-Inca and Inca ceramics ‘float’ in glass caskets; the backs of her images are inscribed with terms used to denigrate indigenous populations. In the same room four new works from the artist’s series Cryptomnesia (or in some museums the sun never shines) (2015–ongoing) shroud the walls. In these painterly reconstructions of the ‘exhibition logic of [the] European anthropological museum’, Gamarra Heshiki limns non-Western objects in gloomy museum halls FIG. 7. Photographs of contemporary violence – refugees taking to water, police arrests, human trafficking – occupy the corners of each painting, disrupting their solemn states and incriminating the museum as an agent of timeless imperialism.

More than four hundred years before the Biennale, which drew much of its work from South and Central American communities, ninety per cent of indigenous Mesoamerican peoples were killed by diseases introduced by colonists. Today, descendants of these communities continue to be disproportionately affected by the coronavirus pandemic, a condition aggravated by multivalent forms of extraction, legalised by years of white patriarchal rule. The 11th Berlin Biennale lays bare the continuity of destruction and dispossession for any viewer that has time for it, and, during what many declare an ‘unprecedented time’, points to a crisis that is far from unprecedented. Viewed from a country defined by what can feel like impenetrable indifference, the exhibition leans into art’s ability to reiterate the relationship between personal systems of belief and social realities. Depending on what you are looking at, this is either an inspiring or a tragic message.

11th Berlin Biennale for Contemporary Art: the crack begins within 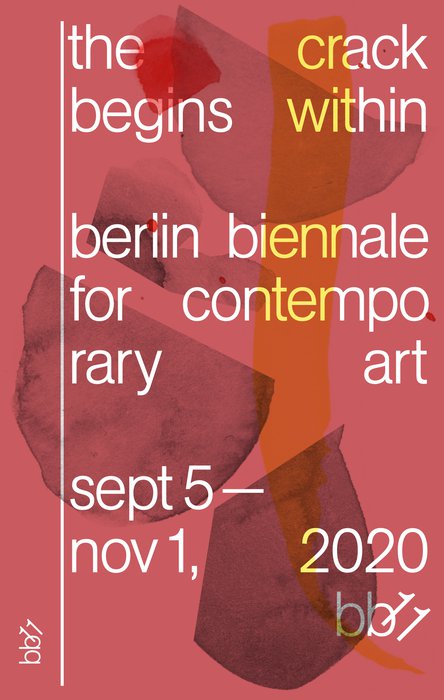 11th Berlin Biennale for Contemporary Art: the crack begins within

is a curator and writer based in Berlin.

is a writer and student based in London.