The Botanical Mind: Art, Mysticism and The Cosmic Tree

If 2020 has taught us anything it is the precarious vulnerability of our human existence, whether that be through our experience of the coronavirus at a micro level or the climate crisis at a macro level. Our bodies are intrinsically bound up with nature, a relationship that we continue to ignore at our peril. The exhibition The Botanical Mind: Art, Mysticism and the Cosmic Tree at Camden Art Centre, London, which was launched online in May and opened at the gallery in September, includes work by some sixty artists to offer a rich, complex and thought-provoking narrative of our relationship with the natural world.1

The exhibition demonstrates the importance of the plant kingdom to humanity – our lives, consciousness and spirituality – across human history and cultures. Artists have played an important role in grasping and communicating the importance of plants as a universal human symbol and the most dangerously misunderstood and underestimated form of life on our planet. Both versions of the exhibition take a thematic approach to the human-plant relationship. A series of enduring approaches emerge, which have informed how we have thought about our own bodies in nature.

The six ‘chapters’ of the online exhibition2 – The Cosmic Tree; Sacred Geometry; Indigenous Cosmologies; Astrological Botany; As Within, So Without; and Vegetal Ontology – are slightly reconfigured in the physical space and expanded to include Rainforest; Origin Story; Axis Mundi; As Above, So Below; As Within, So Without; Moss/Littleness; Botanical Mysticism; Music of the Spheres; Shaman; and Being Sessile. This responds to the different works and media included and how they are displayed but also allows for a different type of interaction: whereas the online exhibition is more narrative, the physical is much more visual.

The sections ‘The Cosmic Tree’ and ‘Axis Mundi’ consider the symbol of the tree joining the physical and transcendental realms of the universe. Starting with the twentieth-century psychoanalyst Carl Jung and the colourful, intricate, recurring tree images in his Red Book (2009) FIG. 1, this section shows the importance of trees. From the Christian tree of Jesse depicted in a sixteenth-century oil painting by an anonymous artist (c.1520), via the flower-like mandala common to many religions and represented here by colourful Jain and Tibetan examples (from the nineteenth-century and twentieth-century respectively), we reach Adam Chodzko’s commission for this exhibition, the two-screen video work O, you happy roots, branch and mediatrix, which draws footage directly from the centre’s garden via an algorithm FIG. 2.

‘As above, so below’ explores the human body as a reflection of the universe, connecting Indian Ayurvedic medicine to the Western occult tradition and Surrealist art. The section includes works by Ithell Colquhoun and Eileen Agar FIG. 3 – artists who both draw relationships between the human form and nature – as well as an eighteenth to nineteenth-century Brahmanda (Map of the Universe) from Rajasthan and watercolours by the spiritualist artist Hilma af Klint. Humankind’s turn to entheogenic plants across various cultures – ‘Entheogenic’ is a way of describing hallucinogenic plants in a way that understands their crucial spiritual significance in many non-Western cultures – shows how our consciousness is connected to the plant world in ‘As within, so without’, which includes vibrant textiles from the Shipibo-Conibo people of Peruvian Amazonia FIG. 4. ‘Being Sessile’ departs most from the online exhibition in the choice of works but similarly urges a philosophical approach to plant life, allowing us to understand that the lack of a neurological centre does not give plants less subjectivity than humans.

The Botanical Mind brings together artists working across a wide range of media from painting to electronics. Works of art by such well-known figures as Josef and Anni Albers appear alongside examples by established contemporary artists including Cerith Wyn Evans and Linder FIG. 5 as well as work by a number of Outsider artists, including the detailed drawings of botanical forms by Josef Kotzian FIG. 6, floral pastels by Anna Zemánková and Scottie Wilson’s highly personal mandalas. Indigenous art is given an important role and shown as central to knowledge-production in the Shipibo-Conibo people and the Huni Kuin of Brazil, although sadly the planned installation combining designs and music by the Yawanawá people (also Amazonian Brazil) was prevented by COVID-19. Artists more associated with science also feature, including the pioneering photographer Anna Atkins, whose cyanotypes of algae and ferns (1851–54) enchant. The publication Art Forms in Nature (1899–1904) by the influential and controversial illustrator Ernst Haeckel and pencil and watercolour works (2019) by the contemporary artist Gemma Anderson appear across various sections, consistently showing how visual engagement with the forms of nature has also been crucial to science.

Our contemporary understanding of science and technology is also probed and expanded. The Western medicated body is rendered ambiguous in this broader view of the body as a microcosm, in which healing is entwined with the vegetal kingdom. This is perhaps most visible in Fred Tomaselli’s striking mixed-media painting Torso (Large) (1999), in which tablets and pills are encased in poured resin overpainted with winding plants and human organs FIG. 7. Jordan Belson’s mesmerising film Music of the Spheres (1977) weaves together abstract, hypnotic and cosmic images to build on ancient Greek ideas of the intrinsic connections between geometry, music and cosmology. For Outsider artist Kotzian, creating detailed drawings of botanical forms presented a spiritualist escape from his life as a machinist, whereas contemporary artist Wyn Evans employs a complex electronic and mechanical structure for the installation Composition of 12 Flutes (2015) to play a musical arrangement through a series of glass flutes, employing the most basic element, air, which is created by plants and vital to all life on Earth.

The Botanical Mind decisively dismantles the categories, disciplines and labels with which we have become accustomed to understanding our lives in the Western world: human-vegetal, science-belief, art-ethnography, thinking-feeling and even art-science. It makes clear how continuities of thought and expression about humankind’s deep relationship with nature, the earth and plant-life spread from the Christian abbess and mystic Hildegard von Bingen in the twelfth century to Carl Jung in the twentieth. Von Bingen’s extraordinary illuminated Liber Divinorum Operum (The Book of Divine Works) FIG. 8 appears alongside images from Jung’s Red Book as examples of ‘The Cosmic Tree’ in the online exhibition. This continuity, in both image and thought, survives despite the dislocations caused by Enlightenment thought, usually seen as a pinnacle of rational science but here shown to separate mind and body, human and vegetal, as well as destroying indigenous knowledge systems through colonial values of ‘reason’ and ‘progress’.

With its dual presence online and in the gallery, The Botanical Mind also challenges our expectations of an exhibition. Despite overlapping works of art, themes and messages, these present two ultimately divergent experiences, in which works impress differently on the viewer, allow varying details to emerge in juxtaposition and open the space to a variety of audio and visual voices. It is to be hoped that another takeaway from 2020 will be the opening up of exhibition practice into the digital realm to allow the inclusive, visually varied and more sustainable kind of experience that this exhibition models so well. 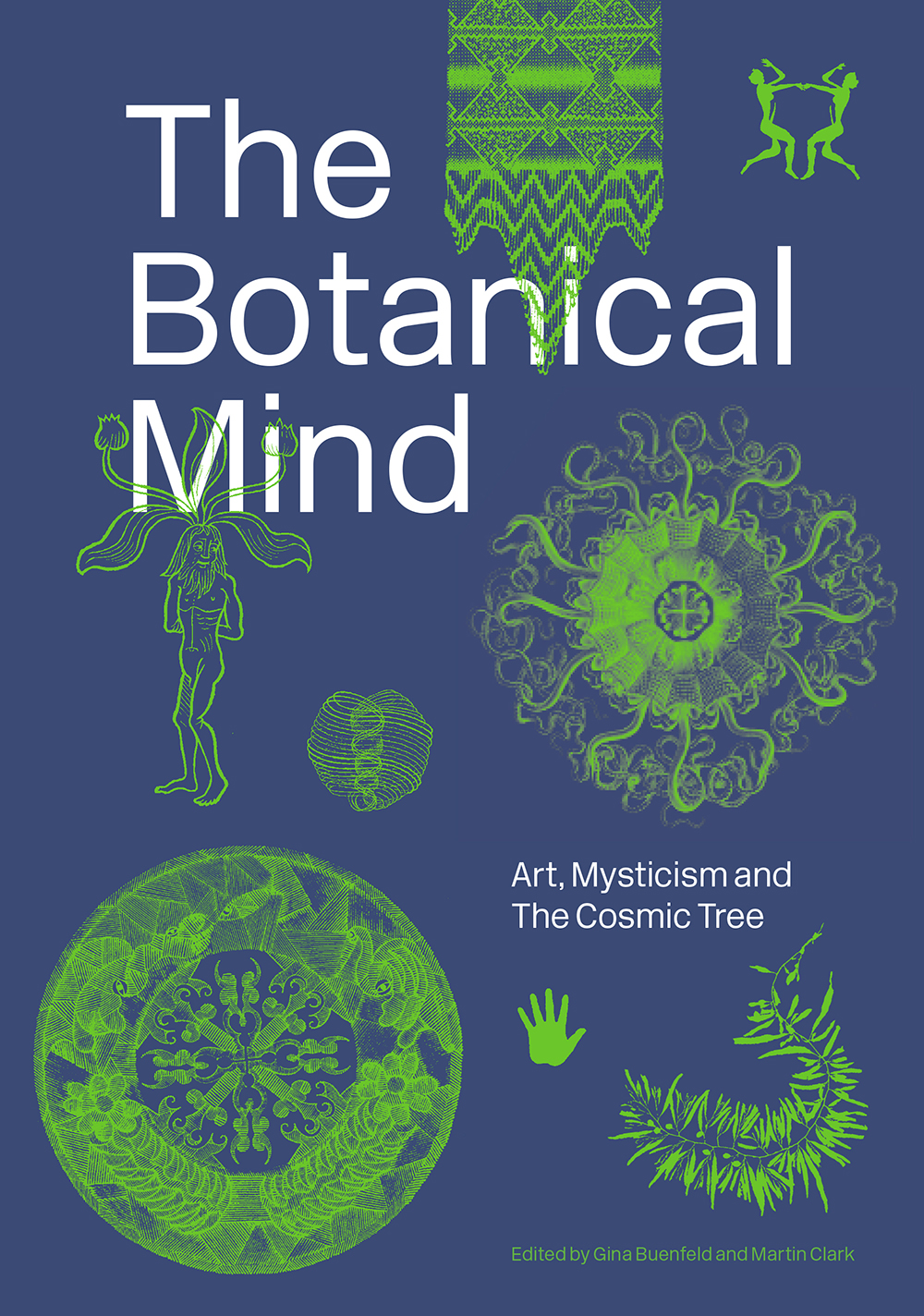 The Botanical Mind: Art, Mysticism and The Cosmic Tree

(@spoonsontrays) is a London-based curator and writer interested in the intersections of art, science and material culture.