Not all is as it seems in Penny World. Parasites buzz like tiny lyrical atoms, creating a fictive, itchy hum that will not quell. Forms that have soft, inviting curves taper into sharp points FIG. 1. This exhibition is riddled with disquieting traumas: the wounds of substance abuse, housing poverty, domestic violence, PTSD and failing therapeutic care. In her compulsive artmaking, the artist and poet Penny Goring (b.1962) uses the everyday materials that she has to hand, including fabric, biro, felt-tip pen and Microsoft Paint. Penny World is the artist’s first institutional solo exhibition and includes work she created between 1992 and 2022.1 Goring spent many of these years in hiding from the art world, privately processing the trauma of her violent past, including the tragic overdose of her girlfriend Amelia.2 As such, Goring’s artmaking can be interpreted first and foremost as a process of recovery.

Although Goring specialised in painting when she studied at Kingston School of Art, Penny World encompasses a much wider range of media: drawing, textiles, soft sculpture, poetry, film and image macros from her unabashed Tumblr feed. For Goring, art school was an anxiety-ridden place that ignited her reliance on alcohol, which she sought treatment for in the 2000s.3 Her early works were contemporaneous to Tracey Emin’s confessional mode and Sarah Lucas’s stuffed phallic shapes. However, in her refusal to pander to the art market or a network beyond the threshold of her home, Goring forged an alternative undercurrent in London. She opts instead to align her work with that of Frida Kahlo, Eva Hesse and Louise Bourgeois. Although she continued to produce work in the 1990s and 2000s, her main preoccupation was one of survival – for herself and her child – leaving little time to forge a formal career.4 Only recently has Goring begun to show the work made during this period and her practice serves as a reminder that detachment can at times be a form of self-preservation.

In a number of works in Penny World, connection between beings is represented as dangerous or parasitic. The drawing Truly (ART HELL) FIG. 2, for example, equates sexual intercourse with a visceral stab wound to the eye. In the felt-tip pen drawing Amelia Dead Inside Me FIG. 3, Goring depicts herself with a limp, grey arm, which is impaled with a syringe, protruding from her vagina. Here, grief is presented as an infestation of the living body – another lifeless body stuck inside her own. Be it the leeching sadness over the loss of her lover, the physical process of giving birth or the shattering addiction that inhabited her bloodstream for so many years, Goring’s work addresses the idea of sharing one’s body with another entity. Penny World opened its doors in the same month that the Supreme Court of the United States voted to overturn Roe v Wade – a decision that reminded women across the world that ownership of their body is not a right. As Goring’s work demonstrates all too well, this bodily autonomy is deeply precarious.

In the painting Dim Jaw FIG. 4, touch is zoomorphised as an unruly leeching bug. A monstrous parasite latches onto a blindfolded woman, whose dress writhes with tiny larvae-like dots. Goring’s use of a solid ground, warped perspective and floating characters creates a nightmarish vision of isolation, made more sinister by the pastel colour palette, which hints at the innocence of girlhood. Goring’s paintings from this period, including Dim Jaw, were criticised by a university tutor, who classed them as too ‘girl’s world’. In a direct reference to this comment, the painting Girls World (1993) shows a black sludge-like cloud, which traps the body of a frazzled figure against the corners of the page; an insect-like creature is entwined around her. The image could be interpreted as the depiction of a depressive episode, illustrating the darkness that envelopes the young woman whose value to society often hinges on her body. It is also perhaps an early variation of Goring’s wearable sculptures, Anxiety Objects (2017). An example of such works can be seen in the photograph My Monsters are Terrified of Me (2017), which shows Goring sitting naked, on her knees, with a stuffed toy around her, comforting her through the menopause and her changing relationship with her body.5

Across the Institute of Contemporary Arts, London (ICA), similar body-like effigies adorn the walls, hanging like butchered meat for the audience’s inspection. In the soft sculpture Dust Doll FIG. 5, a blood-red hand hangs around the neck of a grey figure; a five-pronged shape protrudes from its head. Each of Goring’s faceless dolls presents a different combination of altered limbs, which appear to represent how emotions can relate to, and be communicated by, different parts of the body. As Goring has noted: ‘I make these doll sculptures lovingly, honoring the emotions, the frailties, the symptoms of the act of living’.6

Penny World is shown in three rooms across two floors, connected by windowless corridors and stairwells that are plastered with the artist’s image macros – digital works of art originally created for the internet that usually combine image and text FIG. 6. For I Was a Visionary for Boudica FIG. 7, Goring has superimposed her naked, pregnant body onto an empty woodland path; in another, her head is attached to the body of a cow. Such images are normally viewed on the screen of a computer or a phone, flicked through and shared at speed. In Penny World they are blown up to the extreme, affixed to the walls like religious murals, tumbling out into the corridors and café of the ICA. Created using Microsoft Paint, the decals already appear somewhat dated as examples of ‘post-internet’ art. Yet their significance in Goring’s practice lies in their ability to allow her to connect with an audience, having spent so long working in solitude.

In the corner of the lower gallery FIG. 8, a darkened room shows the video works Fear (2013) and Please Make Me Love You (2014). Goring’s voice resounds with a piercing rhythm that imitates a panic attack:

I fear myself.
I fear my body and brain.
I fear my addictive nature and the way it tricks me.
I fear my mood swings and instability.

This is contrasted with a stream of softer, more humourous poetry in Please Make Me Love You:

These words can be heard throughout the neighbouring exhibition space, providing a mantra-like soundscape and reflecting how Goring’s poems are ‘natural spillage, in so much as they are a written by-product of the thinking, imagining, and visualizing’ involved in creating material objects.7 In the early 2000s, these words began to overflow and leak out into the alt-lit realms of Facebook, Twitter and Tumblr – places where publishing is free, another example of Goring’s connection with a community from the safety of her home.

Self-representation is an important part of the artistic process in Penny World. At the entrance, visitors are invited to use their smartphone to scan a QR code, which takes them to an Instagram filter that superimposes the artist’s face over their own. Visitors can move the artist’s facial features or play dress-up with her body. Here, the screen acts as a mirror but also provides a portal into another world. Yet, although the audience are invited to inhabit Penny World, they are only ever able to guess at what it is like to truly live there. Wrong Doll (2022) is a peach-coloured figure with brown hair and the words ‘wrong face’, ‘wrong feeling’, ‘wrong leg’ and ‘wrong heart’ carefully stitched over its limbs. These sentiments will be familiar to many who share thoughts of the ‘wrong’ body parts when looking in the mirror. Now, it is harder than ever to escape the proverbial ‘mirror’. Whether through the screen of a video call or a smart phone camera, mirrors follow us into our most intimate worlds, encouraging constant regulation and critique to nauseating effect – and yet we feel less in control of our bodies than ever.8 In Goring’s work therapy and creation are tightly entwined. Penny World is a place of refuge for the artist, but it is certainly no idealistic fantasy. Goring makes art in, but not for, an anxious world. This exhibition allows the viewer inside, but does not exist to entertain, instead representing the artist’s recovery of selfhood. 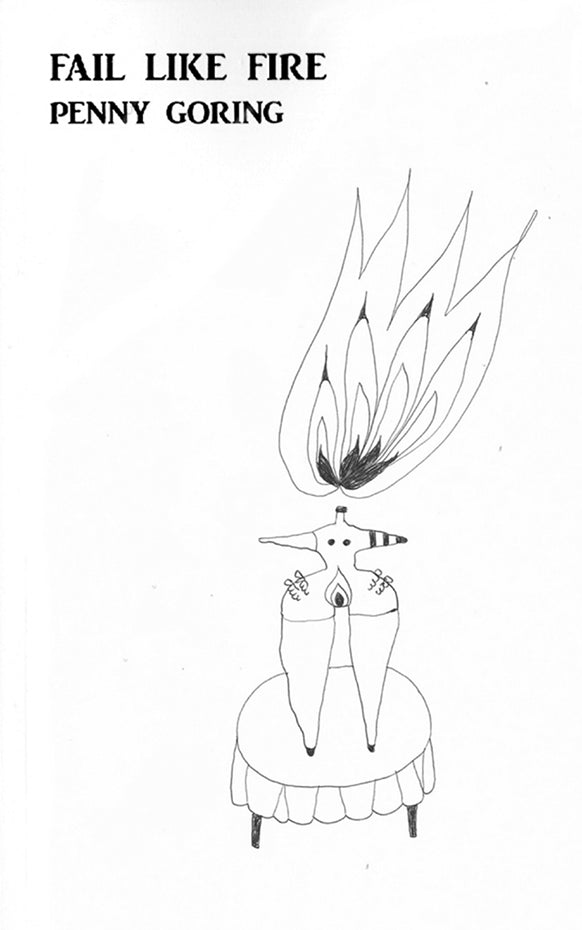 is a PhD candidate at Oxford University. She lives and works in London.