Mixing It Up: Painting Today

It would be fair to say that, more than any other medium, painting invites persistent criticism from certain quarters of the art world. For some, its freighted history overburdens it, whereas others dismiss it as superficial and market-orientated. Writing in the introductory catalogue text for Mixing it Up: Painting Today, the curator, Ralph Rugoff, acknowledges as much. Painting is, he states, often viewed as a ‘relic without relevance’ that is ‘cavalierly dismissed as the most traditional and conservative of art forms’ (p.6).

The exhibition convenes over 125 canvases by thirty-one painters based in Britain and makes a claim for the current relevancy of the medium. For the casual visitor, the exhibition serves as an introduction to current painting trends, while seasoned visitors will have seen much of the work in commercial galleries around London in the last few years. There are a couple of different ways of approaching the show: via the market and via the work itself. To begin with the market: the artists range in age from their twenties to their eighties. Although some are only recent graduates their work has sold for significant sums at auction. Jadé Fadojutimi (b.1993), for example, graduated from the Royal College of Art in 2017 and saw one of her works fetch $1.6 million earlier this year.1 Painting is often considered to be a slow medium, and yet everything around it can seem hyperbolic and accelerated, with still wet canvases by promising artists becoming baubles for bankers. The predatory speculation of the secondary market dominates the headlines and damages artist’s careers. Although works of art are traded like stocks and shares – in either an upwards or downwards trajectory – the artist may not receive much profit from these sales and can also experience significant damage to their primary market. Painting appears to be particularly susceptible to this inflationary economy and the craze for ‘zombie abstraction’ acts as a cautionary tale.2

Yet, moving beyond the short attention span of the market, the medium has proved resilient. There have been several significant painting shows in major institutions over the last decade. Exhibitions such as Painting Now: Five Contemporary Artists at Tate Britain (2013), The Forever Now: Contemporary Painting in an Atemporal World at the Museum of Modern Art, New York, (MoMA; 2014–15), and Radical Figures at the Whitechapel Gallery, London (2020), have all surveyed painting trends with various degrees of success. In addition, large-scale institutions including Tate have afforded recent retrospectives to Paula Rego (b.1935), David Hockney (b.1937), Lubaina Himid (b.1954), Frank Bowling (b.1934) and Lynette Yiadom-Boakye (b.1977). International painters as diverse as Amy Sillman (b.1955), Kerry James Marshall (b.1955) and Nicole Eisenman (b.1965) balance commercial and critical attention, not to mention stalwarts such as Luc Tuymans (b.1958) and Marlene Dumas (b.1953). The last few years have seen younger BIPOC artists adopt the medium precisely because of its burdened history. Michael Armitage (b.1984) has reinvigorated landscape painting through dreamlike interrogations of colonial history, while Joy Labinjo (b.1994) centres Black experience through representations of family life. Curiously, neither are present in the exhibition under review, and their absence is striking. Inevitably, there will be notable exclusions in survey exhibitions, but if we focus on what Mixing it Up: Painting Today includes: does it have much to say about the current state of painting in the United Kingdom?

The exhibition is associatively curated rather than strictly thematic, creating a conversational tone across the Hayward’s cavernous galleries. In the lower galleries, canvases take up every available wall in a claustrophobic hang FIG. 1. The work is predominantly figurative and veers between photorealist and stylised evocations of the body. Influences abound: Johannes Vermeer (1632–75), John Constable (1776–1837) and Martin Kippenberger (1953–97), to name a few, appear like ghosts throughout the galleries. Paintings talk to and over each other, creating new synergies and sometimes flattening nuances. The decision to invite a number of external writers to contribute wall labels amplifies this curatorial multivalency. Much is made of painting’s multiplicity by Rugoff in his catalogue essay, as well as its ability to counter the ‘swipe-able, one-liner images that inundate our lives’ (p.6). Yet, despite the resolute materiality of much of the work here, most of it translates well on Instagram. David Joselit has previously written on the dynamic of ‘massive accumulation and endemic distraction’ in relation to painting and the sense of deferred experience due to accelerated spectatorship.3 There is a similar tension throughout the show: between attentive slowness and distracted speed.

What emerges through the frenetic installation is a sense of affinities: artists in cahoots across generations and lived experiences. The introductory gallery sets the tone, presenting four distinct takes on figuration by Himid, Lisa Brice (b.1968), Sophie Von Hellermann (b.1975) and Mohammed Sami (b.1981). Himid’s The Captain and the Mate FIG. 2 greets visitors to the exhibition. The painting is inspired by James Tissot’s painting of the same name from 1873 and depicts four Black figures on a slave ship. The image is rendered in Himid’s signature flat chromatic style and shallow depth of field. One man embraces another male, who is dressed as a captain. In the bottom of the image, two women put their arms around one another. Anxiety pervades their expressions. Atrocity is hinted at but remains out of sight, violent histories are resurfaced but the trauma is never repeated.

Von Hellerman’s wistful dreamscapes are produced in a single sitting with fluid paint on raw canvas FIG. 3; they contrast starkly with Sami’s psychologically charged renditions of war-ravaged Iraq. From the outset of the exhibition, we are pulled in opposite directions. Painting as a space of imaginative escape and a place to confront the reality. Brice’s Smoke and Mirrors FIG. 4 shows an art studio with off-duty odalisques lounging around and smoking. Fed up with being objectified, these muses return our gaze. The work is full of painterly invention and erotic innuendo: a female painter pours blue paint onto a canvas on the floor while an aroused cat looks on, its erect tail deftly mirroring the plumes of cigarette smoke. Thematically, the work recalls The Infinity Kisses II (1990–98) by Carolee Schneemann (1939–2019), which encompasses photographs of Schneemann snogging her cat every morning. In both Schneemann’s and Brice’s work, the feline symbolism’s long association with femininity is charged with a newly empowered eroticism. Collectively, the work in the introductory gallery articulates painting’s ability to conjure as well as contest history.

In the third of the lower galleries, paintings by Kudzanai-Violet Hwami (b.1993) FIG. 5 combine gestural figuration, screen-printed images and passages of monochromatic abstraction, incorporating personal and online imagery. Hwami’s work exemplifies Rugoff’s assertion that painting offers a range of ‘possible meanings’ for audiences to ‘see what resonates with details of one’s own experience’ (p.16). We are reminded that looking is its own form of making: meaning is produced in dialogue between the artist’s intention and the viewer’s imagination. Whether it is invoking timeless miniaturised worlds, as in the work of Graham Little (b.1972) and Gareth Cadwallader (b.1979), or exploring Surrealist fragmentation, in the work of Allison Katz (b.1980) and Caragh Thuring (b.1972), the exhibition runs the whole gamut of painterly possibility. Paintings by Hurvin Anderson (b.1965) and Matthew Krishanu (b.1980) engage with the sublime via landscape. Krishanu’s modestly sized canvases depict the artist and his brother idling and playing in Bangladesh FIG. 6. The work draws on his childhood experiences of moving after his family relocated from Britain. Anderson’s paintings hybridise the Jamaican and British landscape creating a semi-fictional environment FIG. 7. Both artists create a painterly third space, between memory and place, in order to reflect on displacement and belonging.

In the upper galleries the octogenarian Rose Wylie (b.1934) presents a series of exuberant paintings, which are exhibited in a fruitful dialogue with those of Alvaro Barrington (b.1983). In his painting practice Barrington also uses weaving and collage, and his works often include concrete and timber frames FIG. 8. His iconography includes rap lyrics, acidic colours and images of hip-hop icons. Wylie’s canvases are similarly an act of irreverent world-making, riffing on comics, television and print media. Despite the fifty-year age gap, there is a shared omnivorous appetite for everyday visual culture.

Another productive and unexpected conversation emerges between Merlin James (b.1960) and Louise Giovanelli (b.1993). James wrestles with his paintings over many years, creating Frankenstein’s monster-esque canvases with bits cut out and blotting paper stuck on: fluff delineates a cloud; matchsticks become a garden shed. His paintings recall those of Gustave Courbet (1819–77) and Prunella Clough (1919–99), at once grand and diaristic. Giovanelli’s Wager (2021) depicts two shiny golden shirts. The image, like many of the artist’s canvases, is tightly cropped and occupies the frame. Whereas James displays wear and tear, Giovanelli camouflages it. They each play with scale and surface, directing our attention to what painting does as much as what it depicts. Whereas in James’s and Giovanelli’s work it is the differences that direct you to look for the affinities, other galleries are less successful in this regard. In the gallery next door, Rachel Jones’s Lick your teeth, they so clutch FIG. 9 is a monumental landscape made with oil stick and pastel, which is stapled directly to the gallery wall. Jones goes straight for the jugular, layering gestural, boldly coloured marks with the faintest suggestion of teeth. Jones shares the space with Fadojutimi and Oscar Murillo (b.1986) and each artists’ expressive mark-making is tonally very similar, resulting in a one-dimensional installation.

Mixing it Up is very much a mixtape: a personal take on contemporary painting from Rugoff and his curatorial team. At its best, the exhibition affords an opportunity to explore the work of artists in conversation with their peers. It is an exhibition that relies on citation: influence is acknowledged rather than hidden. Art history becomes communal – the emerging in conversation with the well-established, the recently discovered invoking the spirit of the long dead. In time, some artist’s reputations will grow while others’ will fade. Yet, for all the hyperbole about the return of painting it is clear that it never really went away. The world changes, painting changes with it. Edouard Manet had his Parisian streets; Kudzanai-Violet Hwami has Google.

Mixing It Up: Painting Today 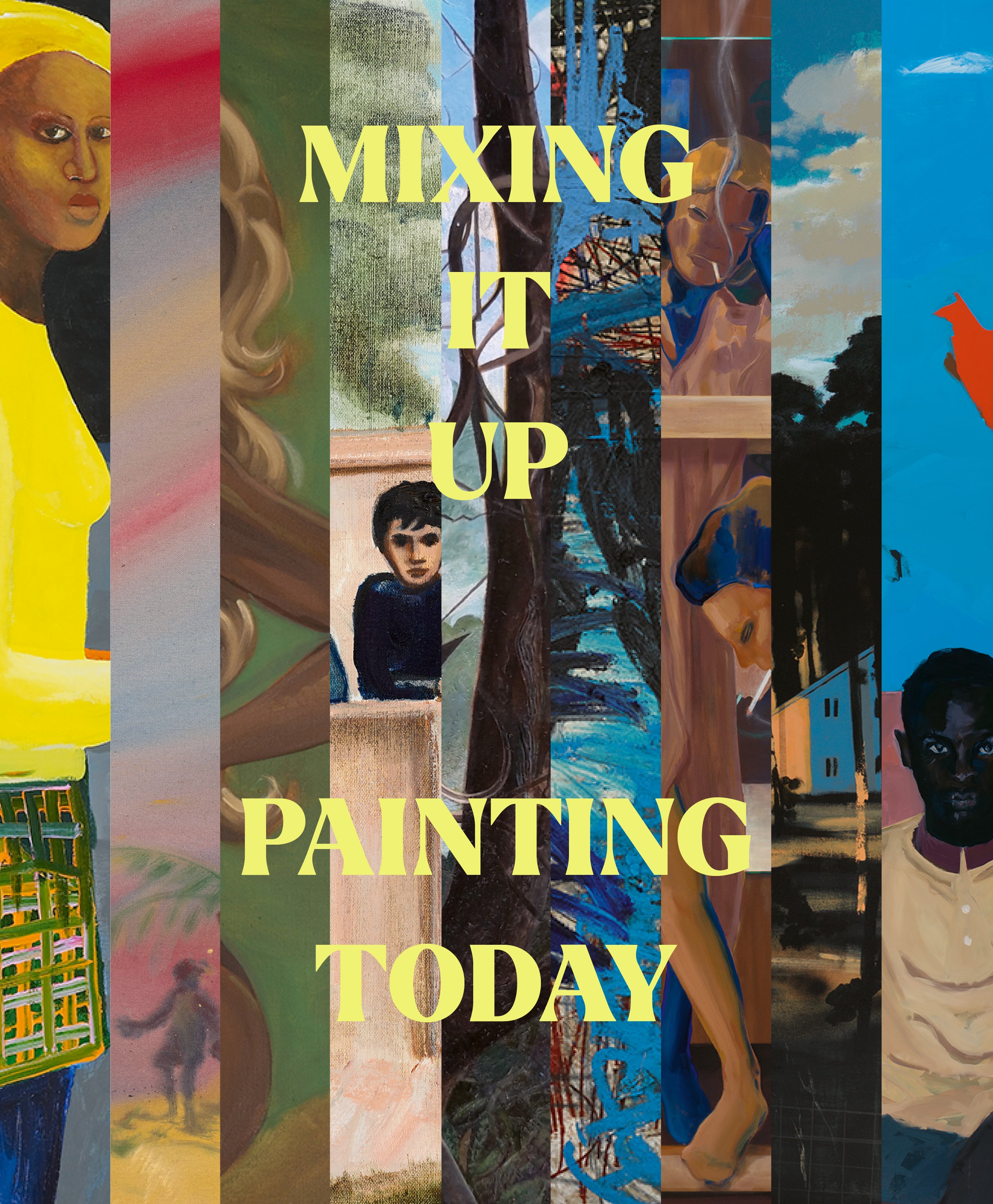 is a curator and a writer.