Heba Y. Amin: When I see the future, I close my eyes

Heba Y. Amin’s first solo exhibition in the United Kingdom, When I see the future, I close my eyes, explores themes central to current global political debate: censorship, surveillance and democracy. Held at The Mosaic Rooms, London, the show focuses on the geopolitical context of Egypt and the Middle East, offering provocative and seemingly absurd inquiries into the region’s archival history. It comprises three research-based projects that employ true stories as entry points: Operation Sunken Sea is a contemporary reworking of twentieth-century propositions to drain the Mediterranean Sea, which were driven by colonial interest; The General’s Stork is a photographic investigation into two avian tales interlinked by aerial warfare; and Project Speak2Tweet presents an archive of Egypt in revolt and cut off from the internet. Questioning the power structures of technology, Amin offers a unique insight into the construction of the Middle East and how it is visualised in a contemporary Westernised context.

Made up of film, photographs and historical documents, Operation Sunken Sea (2018–ongoing) is installed downstairs in a darkened basement evocative of a bunker. A monochrome, formally posed portrait of Amin in the guise of an imagined totalitarian leader is displayed on the wall FIG. 1. She overlooks an elongated podium, on which scans of historical records pertaining to twentieth-century proposals by various leaders, geographers and scientists to drain the Mediterranean Sea are displayed in light boxes FIG. 2. The best known of these is Atlantropa, a project proposed by the German architect Herman Sörgel in the 1920s, which advocated for the construction of a dam at the Strait of Gibraltar, which would form land bridges between Europe and Africa. According to Amin, although this techno-utopian idea was often proposed under the guise of peace and unity, in reality, it was motivated by a colonial agenda contingent on Europe exploiting Africa’s resources.

A map of the Mediterranean Sea by the Persian geographer Al-Istakhri, taken from a tenth-century Islamic manuscript, is placed at the end of the installation FIG. 3. Simplified into a graphic logo the map also acts as the project’s insignia, appearing in the backdrop of a nineteen-minute filmed speech given by Amin, which is projected onto the gallery wall. Dressed in the same high-neck, black blouse as in her portrait, she adopts the language of totalitarian address – including words used by such historical and current world leaders as Dwight D. Eisenhower, Benito Mussolini and Recep Tayyip Erdoğan – to expound on the benefits of such a proposal FIG. 4. Amin flips these proposals on their head, repurposing the draining of the Mediterranean for her own means: ‘The operation promises to bring an end to terrorism and the migration crisis, provide employment and energy alternatives and confront the rise of fascism’. She thus recontextualises the language of male, colonial narratives – now spoken by an African Arab woman in a contemporary context.

Behind these collated documents lies years of research, in which Amin has attempted to overturn historical narratives. Take, for instance, a black-and-white photograph of Sörgel, in which he is seated at a desk, surrounded by maps. As part of Operation Sunken Sea, Amin has restaged this portrait, inserting herself into Sörgel’s place – an image that now appears next to the original in the Google search results for his name FIG. 5. Alongside her autocratic speech, Amin’s interventions resituate Sörgel’s extravagant scheme in an absurd cycle, caught in the indeterminate space between what is real and what isn’t.

Amin’s use of cartographical elements continues in The General’s Stork, which further explores the representation of new lands for the purpose of expansion. Amin began the project in response to a 2013 viral media story about a stork that had been detained by Egyptian authorities and charged with espionage due to a tracking device found on its neck. Amin delved into the origins of such paranoia and suspicion, ultimately leading her to an investigation of the development of aerial technologies, warfare and a broader framework of the socio- and geopolitical history of the Middle East. Following the introduction of the ‘spy stork’ incident in the gallery’s wall text, the viewer is presented with archival images of Lord Edmund Allenby, the British High Commissioner for Egypt and the Sudan from 1912 to 1925, with his pet marabou stork. Amin has printed the photographs in monochromatic pink, with elements cut out and Allenby’s stork often rendered in black and white – tactics that undermine the images’ authenticity FIG. 6. In 1917, Allenby led the capture of Jerusalem from the Ottoman Empire. He is said to have turned to God for guidance and as a result enacted a ‘biblical prophecy’ taken from Isaiah 31:5: ‘As birds flying, so will the Lord of hosts defend Jerusalem; defending he will deliver it; and passing over he will preserve it’.1 Allenby interpreted this by sending planes over Jerusalem to drop leaflets ordering those in power to surrender, signing his name in Arabic, which conveniently translates as ‘prophet’ or ‘son of god’.

Amin’s moving-image work As Birds Flying (2016) is shown on a screen in the centre of the floor FIG. 7. Footage of migrating storks are collaged together with the soundscape from the Egyptian comedy-thriller film Toyour El-Zalam [Birds of Darkness] (1995). The main actor of the film, Adel Imam, is a prominent Egyptian comedian and actor, whose work has often been critical of the government and who was threatened with arrest under the Mohamed Morsi regime in 2012. In Amin’s reworking, the dialogue bizarrely flows from sexual innuendo – ‘is it your first time on top?’– to political rhetoric – ‘never retreat from the democracy that the party has chosen’. The drone footage in the film is juxtaposed with twentieth-century aerial photography displayed on the surrounding walls. Together, these elements coalesce to offer an absurd, humorous entry point into the complex history of the politicisation of aerial warfare within the region.

What is touched upon in the gallery is unpacked in the extensive project-specific publication that accompanies the exhibition. Edited by the curator, Anthony Downey, The General’s Stork unravels the topography of Egypt and Palestine through an aerial gaze of drone warfare, bombing, mapping and surveillance. This ‘bird’s eye view’ and its direct correlation to weapons of warfare is the linchpin of Amin’s body of research. The publication draws out the complex origins of the collective paranoia that could result in the imprisonment of a ‘spy stork’, and also details the damaging reality of Western-centric visualisations and narrativisations of the Middle East. As Amin states ‘the early usage of aerial photography, especially in the early twentieth century, had to do with reconnaissance. Seeing the world from above introduced a new perspective of territory that played into the hands of colonial ideology’.2

Project Speak2Tweet (2011–ongoing) is the most emotionally charged of the three projects in the exhibition. The work utilises personal narratives of the 2011 Egyptian revolution, during which the government blocked the country’s internet access. As a result, programmers set up speak2tweet – a platform that allowed citizens to call a number and record a voice message to be posted on Twitter. The multi-channel video work is installed on a series of steel beams that reference the structure of a prison cell FIG. 8. Set to footage of abandoned buildings, audio messages relay messages of protest: ‘I am going to the square and I bid you farewell because I don’t know what could happen’. Highlighting the technological systems that were instrumental in the revolution, Project speak2tweet combines the damaging physical effects on the infrastructure of a country with the emotional turmoil of people under a dictatorial regime. In contrast to Operation Sunken Sea and The General’s Stork, both of which provide a farcical subversion of the legacies of authoritarianism, Project Speak2Tweet leaves a more haunting and emotive picture of the destructive effects that colonial and fascist regimes can have on a country.

Although the exhibition has opened and closed multiple times during intermittent lockdowns, its research-driven nature lends itself well to pandemic viewing. The accompanying publication, online programme of talks, workshops, presentations and an artist-led exhibition tour offer a more nuanced interpretation of the works on display, revealing informative and often crucial details that can be missed when viewing the exhibition in isolation. As Downey states in The General’s Stork, ‘Amin’s investigative, speculative research is her artistic practice’.3 Her methodology lies at the threshold of investigative journalism, providing multifaceted lines of inquiry across an array of media: photography, moving image, installation, text, audio and performance. Her playful, absurdist approach to complex histories of the Middle East is both edifying and unnerving. In attempting to rewrite history, she subverts power structures and reveals little-known historical truths. Most pressingly, she demonstrates how the technologies instrumental to our daily lives undermine our ‘democratic’ systems more often than we care to admit.

Heba Y. Amin: When I see the future, I close my eyes 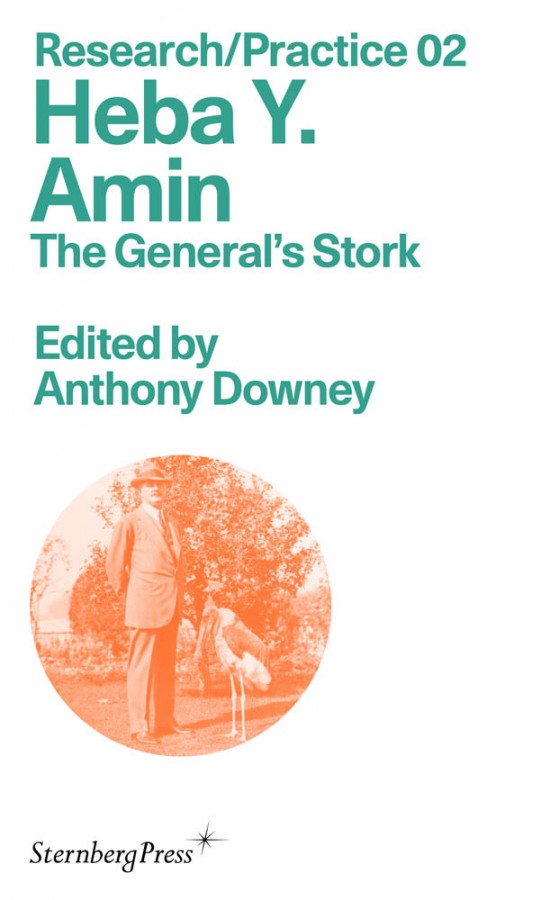 is a writer based between London and Wexford.