As recently as a decade ago, concrete poetry was still routinely passed over in anglophone criticism as a kitsch footnote to twentieth-century literary and artistic history. When the conceptual artist Joseph Kosuth (b.1945) derided the style at the peak of its popularity in 1970 as ‘a simplistic and pseudo-avant-garde gimmick’, he set the tone of its reception for decades to come.1 Nonetheless, the methods of concrete poetry – in essence, the presentation of language as a visual or otherwise materially arresting entity – have proved enduringly engaging. Over the last ten years or so, there has been a critical re-evaluation of the style among English-speaking critics and audiences, with publications and exhibitions reinserting the work of concrete poetry’s major figures, including Ian Hamilton Finlay (1925–2006), into a context from which their defenders had often sought to extricate them, while reappraising less feted contemporaries.2

Among the most significant of these projects was the 2017 exhibition Concrete Poetry: Words and Sounds in Graphic Space at the Getty Research Institute, Los Angeles, which drew on the institute’s collection of prints, artists’ books, journals and manuscripts. Curated by Nancy Perloff, it presented a range of two- and three-dimensional forms, including the ‘poemobiles’ of Augusto de Campos (b.1931) and Julio Plaza (1938–2003) – a series of object-poems resembling pop-up books FIG. 1. As such, Perloff is well-placed to present the first major anthology of the historical movement since the 1960s. Her ethos for doing so is that a ‘revisionary’ approach can now be attempted (p.35). Whereas the editors of early concrete poetry anthologies were duty-bound to capture the breadth and scale of a burgeoning international style, it is now possible, Perloff argues, to ‘discriminate between the more and less important of these many poets and perspectives’ (p.34). She takes an avowedly ‘personal’ approach to this task, with a particular attentiveness to the formal dimensions of the work presented (p.7). ‘Spare does not mean easy’ (p.43), as her introduction notes, and concrete poetry’s tendency towards linguistic minimalism should not be mistaken for a glib or decorative use of semantics. At the same time, a visual and, in some cases, sculptural vocabulary founded on Concrete art and Constructivism is integral to poetic effect. Indeed, it was a failure to grasp the allusive richness of extra-linguistic affect in concrete poetry that led many literary critics to dismiss it as thin or childish. Perloff, by contrast, is attentive to the many dimensions of expression through which the most interesting concrete poems are manifested.

An example will suffice to show how Perloff’s approach teases multivalent complexity from apparent superficiality. Taking De Campos’s poem ‘Codigo’ FIG. 2, which might seem to evidence the claim that concrete poems are no more interesting than graphic advertisements, Perloff notes:

At the centre of this poem is the famous palindrome ‘god/dog’. Additional readings, which result from dividing ‘codigo’ in two, yield ‘digo’ (I say) and ‘co-digo’, a neologism that suggests a collective statement. The entire poem can function as a representation of the world evoked by the shape of a globe spinning through the ideogram (p.56).

Such attunement to the minutiae of semantic and sensory play is what is required to bring concrete poetry to life. The readings attached to each piece, furnished with engaging and presumably hard-won biographical and cultural vignettes, bear out Perloff’s claim that a revisionary anthology can open ‘a window on to how to read concrete poetry and how to explicate the subtleties of its language and its visual and semantic density’ (p.33).

Among the other important practitioners to whom similarly close and lucid attention is offered are the Japanese Sei’ichi Niikuni (1925–77) FIG. 3, whose Kanji ideographs contained inbuilt pictorial dimensions, and Ernst Jandl (1925–2000) FIG. 4, an Austrian master of the performative and neo-Dada elements of Concrete experiment, whose recital at the 1965 International Poetry Incarnation at the Royal Albert Hall, London, received rapturous applause. Mary Ellen Solt (1920–2007), one of the few women associated directly with the Concrete movement – rather than with the wider fields of language-based art and visual poetics that encompassed it – saw concrete poetry as an evolution of the use of spacing to track demotic speech rhythms in the work of her friend and mentor William Carlos Williams. Her own works, however, sometimes tended towards pictorial form, as in her 1966 collection Flowers in Concrete FIG. 5.

On some matters, Perloff’s editorship is less attentive – perhaps deliberately so. Much recent writing on concrete poetry has been concerned with the cultural, political, technological and economic circumstances for the movement’s emergence after the Second World War. Although individual poem readings gesture towards these wider concerns, a different editor, more preoccupied with the sociological dimensions of literary and artistic history, might have made more of the dynamics of information transmission in the age of mass media, 1960s counterculture, space travel and the transnational imagination, and early computer technology as enlightening contexts. When Perloff asks why ‘similar ideas emerge[d] in such different geographical locations’ from the 1950s onwards, her answer remains largely within the formalist terrain of asserting ‘the need [...] to rediscover the early avant-garde’ (p.29), a statement that yields several further ‘whys’.

On issues of selection and exclusion, the decision to elevate the Austrian poet Gerhard Rühm (b.1930) FIG. 6 to a position of equal significance to De Campos and Finlay FIG. 7 as among the pre-eminent figures of concrete poetry will come as a surprise to many. So too will the decision not to grant the Swiss poet Eugen Gomringer (b.1925) FIG. 8 comparable status. It is broadly, although not universally, accepted that Gomringer and the São Paulo-based Noigandres group (which includes De Campos, his brother, Haroldo, and Décio Pignatari) defined many of concrete poetry’s original traits. Certainly, they coined the term ‘concrete poetry’ to identify a number of shared aims after a meeting between Pignatari and Gomringer at the Ulm School of design in 1955.3

Gomringer’s iconic minimalism – with roots in Northern-European Concrete art and strong connections to post-war artistic grammars of mourning, reflection and meditation – was vital to the qualities with which Concretism became associated, although it perhaps does not suit Perloff’s lively and intellectually probing style. Rühm, by contrast, was connected to the cabaret-oriented activities of the Wiener Gruppe. Their output included intermedia happenings that uncannily prefigured Fluxus, and dialect poems – the multivalent semantic connotations of which are expertly unpicked by Perloff. The Wiener Gruppe was one of various neo-avant-garde groups working in a style adjacent to Gomringer and the Noigandres in the 1950s who utilised the term ‘concrete poetry’ to articulate certain elements of their activities. Although Rühm can be counted as one of a large number of globally dispersed concrete poets who achieved striking invention within the constraints of the form they helped to develop, his œuvre nonetheless lacks the spectacular development into three-dimensional world-building, as achieved by Finlay, for example.

The construction of hierarchies based on assertions of quality inevitably invites such queries, with different issues raised by different readers based on any number of contingencies. Despite this and despite questions of inclusion – are John Cage and Carl Andre really concrete poets? – this is an exciting and engaging summary of an important and still misunderstood field, the value of which lies in the intelligence and sensitivity of Perloff’s close readings. 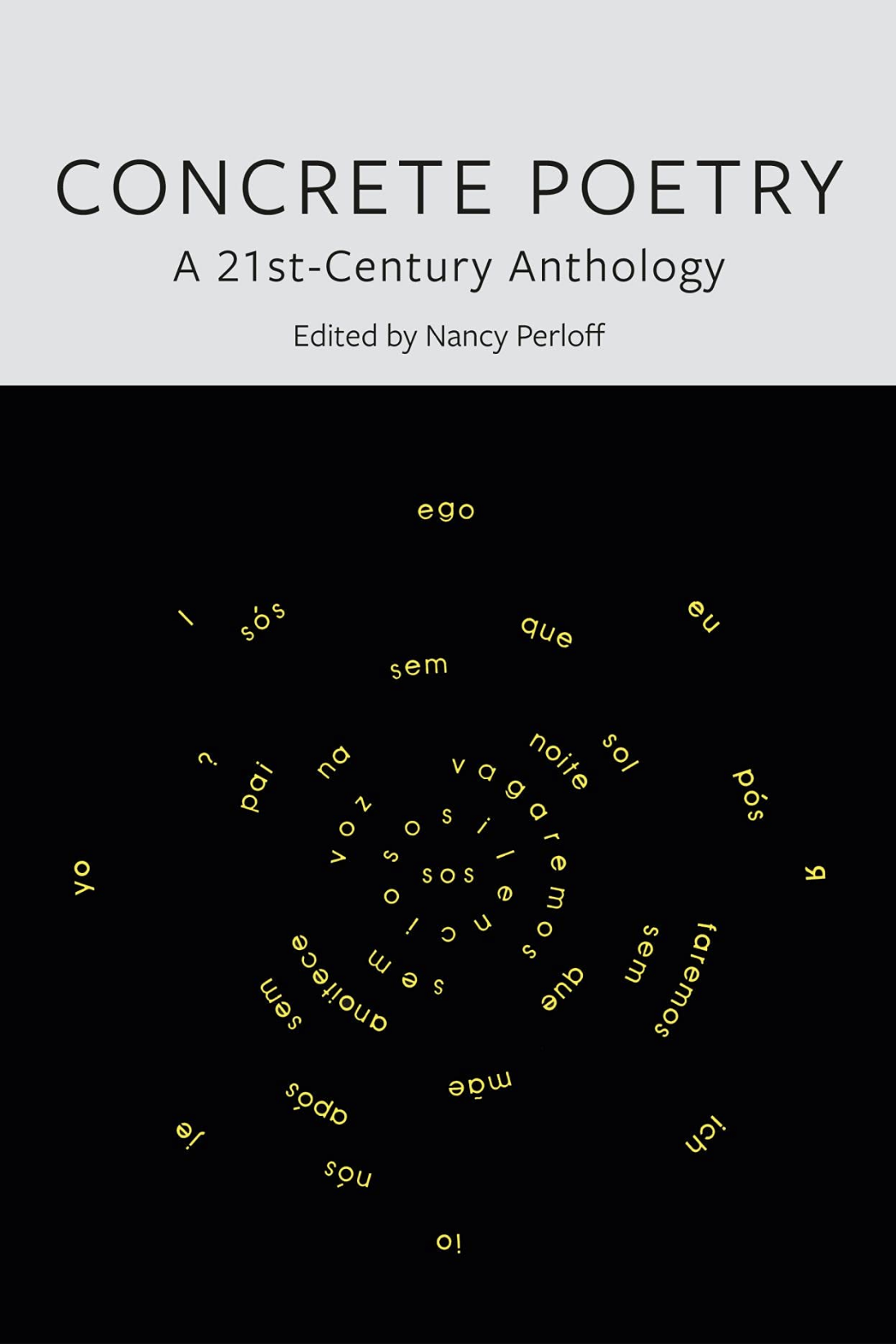 is a writer based in Glasgow. He is the author of Border Blurs: Concrete Poetry in England and Scotland (2019).