The art of Bahia Shehab first attracted international attention in March 2011, when at the start of the Arab Spring the Lebanese-Egyptian artist, activist and academic moved her work from the studio onto the streets of Cairo. For two years she painted walls around the city. What had been conceived as a project using Arabic calligraphy to illustrate the emphatic Egyptian expression ‘No, and a thousand times no’ became charged with revolutionary momentum. The lam-alif (لا), the Arabic word for ‘no’, accompanied a succession of fierce rejections: ‘No to another Pharoah’ beside a stencilled image of President Mubarak, and ‘No to burning books', referencing the remains of the torched Institute of Egypt library.

On a wall along an unamed street there are a series of insurrectionary symbols FIG. 1: the big 'X' of a ballot paper; the blue bra shockingly displayed by police beating a woman whose burkah they had torn off, each subverted by appropriation. At times Shehab painted with others. A life-sized tank stencilled onto a wall followed by a man bearing a tray of loaves on his head soon included protesters, spray-painted alongside Shehab’s images by demonstrators. Regularly whitewashed by the army, they would reappear overnight. Another slogan was added: ‘No to military rule’.

Shehab's book At the Corner of a Dream tracks her journey from Tahrir Square across the world, and documents her stencils on the walls of fifteen cities. In part it is a revindication of the artist’s resistance to globalisation:

‘What did that bring us? We have complied and adopted the modes of the west. But did it get us anywhere, bring any kind of human solutions? ... It just put a wall in my way!’ 1

Shehab’s insistence that history should not be a burden but an inspiration is based on her deep respect and knowledge of 1,400 years of Arab culture. Her stencils of the lam-alif are borrowed from both high and low art: mosques, carpets, lanterns and posters. She writes that each symbol ‘took its form from history, inspired by calligraphy inscribed on tombstones, walls, mosques and artefacts of the past. My thousands of "no's" became my visual voice for the revolution'.2.

Over the following five years, Shehab’s message was reprised on walls in Tokyo and Tunis, Madison and Marrakesh, Berlin and Beirut. In each place, her work addresses local issues, drawing in local people and their personal experiences. In New York a group painted what Shehab calls 'my first legal wall' – so legal that a policeman turned up with a bucket of whitewash to help prepare it for paiting. Others – including Shehab's two daughters – joined in painting a wall in support of women in prison. At the Ionian Centre for the Arts and Culture on the Greek island of Cephalonia, Syrian and African asylum seekers drowned in the Mediterranean are memorialised.

Shehab’s commentaries describe how each work came to be made. At Wisconsin University in 2016, she worked with ‘film producers, native Americans, an army veteran, students and professional muralists [. . .] the majority were women, including the army veteran’ (p.27). A photographic sequence shows how muralist volunteers transformed sheets of A4 paper into a giant stencil reading ‘No to the impossible’. Shehab continues: ‘While we were painting [. . .] we shared our stories, and suddenly my artwork became a carpet of narratives like the ones in the workshops of central Asia where groups of people - usually women - come together and share stories’ (p.28). In The ‘Red Indian’s’ Penultimate Speech to the White Man (Honolulu), Shehab paints with street children, school children, her own children and adults. Her text expresses her initial surprise at being able to collaborate with local arts and cultural workers, preparing the walls and transferring slogans in broad daylight, rather than – as in Cairo – creeping out at night, under imminent threat.

In 2016 Shehab sprayed the makeshift wall of a construction site in Vancouver with a line from Mahmoud Darwish’s poem It was what it was going to be: ‘stand at the corner of a dream and fight’ FIG. 2. Since then the Palestinian poet’s words have accompanied all her work deploying either Arabic or Kufic calligraphy, ‘in new and original forms of the Arabic script [. . .] to remind us of all the nations who continue to struggle for dignity’ (p.7). In Beirut the artist painted ‘my country is not a suitcase’ onto an illegal concrete checkpoint erected by a man referred to locally as a ‘prominent politician’. According to Shehab, it was intended to ‘stop people accessing the street that led to his palace’ FIG. 3 (p.51). It references two poems by Darwish. A first version, My country is not a suitcase, was published in Diary of a Palestinian Wound in 1969. Rewritten as My country is a suitcase, it appeared in 1983, a year after the Israeli invasion of Beirut. She painted the wall with her brother (‘I wanted my mother to see the artwork every time she went out for her regular afternoon walk’), in black script with a scarlet ‘not’. The suitcases stand in rows, with little wheels like feet and emoji-like expressions. They are surrounded by building débris and flanked by street barriers on the rubbish-strewn approach to the fine classical ‘palace’.

There could hardly be a greater contrast than between this and some of Shehab’s larger-scale projects of the same year, such as her work at the Ionian Centre on Cephalonia FIG. 4, or that on a giant hoarding on the corner of the Rue Doudeauville. It is shot while still in preparation, horizontal bands painted in sea shades giving it the aspect of an ocean liner FIG. 5. Across them is displayed a single word in Arabic; in English ‘I will dream’. A double-page spread reveals, on the verso, that the mural abuts the Institut des Cultures d’Islam, a cultural centre housing also Jewish and Christian art. It turns the corner onto the Rue Léon, heart of the multicultural Goutte d’Or district.

By showing art in practice, being made and in use, Shehab’s photographs go beyond the static documentation of a work of art. As photographer, author and designer, she keeps these multiple art forms in play and working together. Shehab founded the Graphic Design Programme at the American University, Cairo, forming a curriculum specialising in the visual culture of the Arab world, and incorporates design into her work at every stage. In her writing and speaking she addresses women across faiths, cultures and generations, featuring prominentlyin the film Nefertiti’s Daughters (directed and produced by Mark Nickolas, 2015) and contributing the chapter ‘The Granddaughters of Schezerade’ to a critical anthology on children’s fiction.3 Yet her roots remain where she came to prominence: through popular protest, expressed through street art and on the internet – her images shared on social media and in TED talks  – with the support of a global audience sympathetic to her politics. In her conclusion, Shehab writes: ‘When you are on a journey, it is other people who end up becoming your home [. . .] Home becomes an idea that we can create anywhere’. In the midst of her documentation of violence, dispossession and exile, resistance is explicitly linked to hospitality. 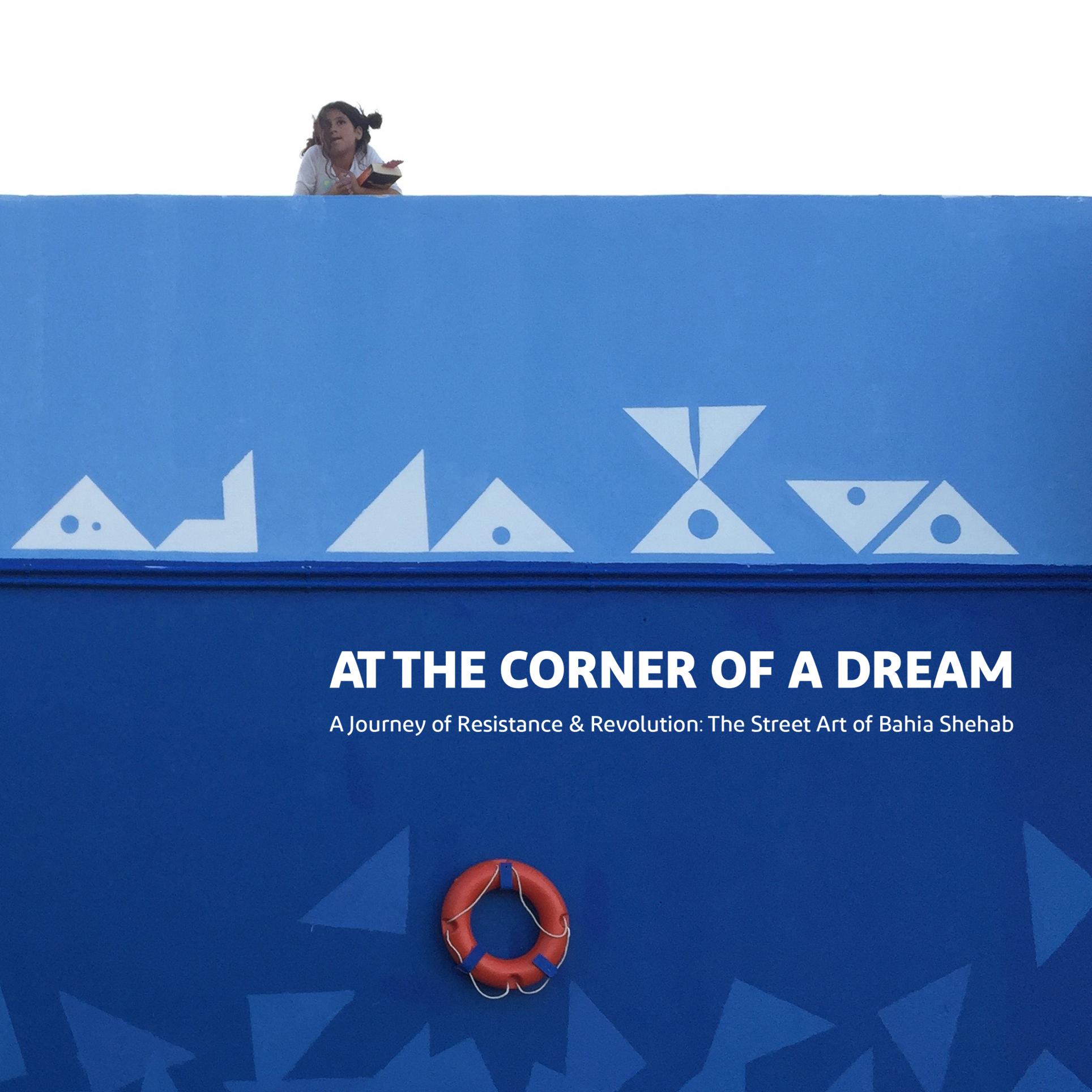 At the Corner of a Dream: A Journey of Revolution and Resistance: The Street Art of Bahia Shehab

Gingko and the Aga Khan University Institute for the Study of Muslim Civilisations, London, 2019

An academic, writer and a literary translator. Her books on photography include a history of photojournalism, an anthology of photographers and a biography of Julia Margaret Cameron. She has curated numerous exhibitions, including of the work by her mother, the immigrée Picture Post photographer Gerti Deutsch. She publishes widely on European and Latin American photography, and writes photographers’ obituaries for the Guardian.