Responding to the complex, politically charged subject of migration puts art and museums to the test. When suffering, death and deprivation are involved, aesthetic questions become inseparable from moral ones. The exhibition When Home Won’t Let You Stay, which takes its name from a poem by the Somali-British writer Warsan Shire (b.1988), features a wide variety of artistic approaches to migration.1 Of the forty works included in the show, a significant number incorporate found objects. Ai Weiwei’s Safe Passage (2016), for example, is made of innumerable life jackets used by migrants travelling from Turkey to Greece. Covering the columns of the Neo-classical façade of the Minneapolis Institute of Art, the work challenges the museum’s status as a realm apart FIG. 1.

Inside the exhibition, Kader Attia has covered the gallery floor with discarded blue denim garments for his installation Dead Sea (2015), whereas Camilo Ontiveros has bound together personal possessions – a bed, a chair, items of clothing and a basketball – left behind by a deported ‘Dreamer’, an undocumented immigrant brought to the US as a child FIG. 2. A pair of sculptural works by Guillermo Galindo incorporate objects found along the US-Mexico border, including parts of the steel wall itself, which the artist has repurposed into musical instruments meant to be played as ‘cyber totemic sonic devices’ (p.108) FIG. 3. Richard Misrach, who collaborated with Galindo on a project documenting the unseen reality of those attempting to reach the US (2013–15), contributes three landscape photographs taken along the border (2009–14) and a large mural (2013–15) created from images of items left in the desert – still lifes that form a collective portrait and shared narrative.

In the catalogue, the curators, Ruth Erickson and Eva Respini, acknowledge the power of mass media images, citing the well-known photograph from 2018 of a two-year-old Honduran girl crying while her mother is searched by government agents at the US-Mexico border. However, Erickson and Respini uphold art as an instrument offering ‘deep and unique insights that compete with the many (mis)understandings of migrants, immigrants, and refugees’ (p.19). Misrach’s works are not conventional photojournalism and neither is Rineke Dijkstra’s Almerisa, a series of fifteen photographs of a Bosnian refugee made roughly every two years beginning in 1994, when the subject arrived in the Netherlands at the age of six. Dijkstra uses pose, gesture, expression and clothing as well as the passage of time – in one photograph the subject is depicted holding an infant – and the absence of any explanation to create an intriguing study that invites speculation on what the sitter’s life has been like, and support the curators’ belief in the subtlety of art.

As stated in the introductory wall text, the exhibition is organised ‘around the theme of sites of transit—bodies of water, borders, refugee camps—and the shifting idea of home’. Although it includes a few small-scale works, large works dominate, beginning with Ai Weiwei’s installation and Reena Saini Kallat’s Woven Chronicle FIG. 4, a large world map handwoven from electrical wire installed at the entrance to the exhibition. The migration and trade routes have been made to look like barbed wire, signalling both a means of communication and a barrier. No work is more imposing than Let Us Pray For the Water Between Us (2020) by the local indigenous art collective Postcommodity FIG. 5. Fashioned from a chemical storage tank used for industrial farming, the work has been transformed into what the wall label describes as a ‘percussive, booming instrument’ that produces a ‘living breathing prayer’. Advocating a better use of natural resources, it was installed in the prominent spot usually occupied by one of the museum’s signature works of art, the Roman copy of Doryphoros. The displacement is a radical gesture because according to the artists the classical sculpture represents a European perspective on the world that is implicated in the oppression of indigenous peoples.

Yinka Shonibare’s American Library (2018) is also revisionist. Comprising six thousand hardback books on shelves running around the entirety of one gallery, it commemorates first- and second-generation Americans and descendants of the Great Migration of African Americans from the South to the North between c.1916 and 1970. Their names are embossed in gold on jackets fashioned from brightly coloured wax fabric, appropriated by Dutch colonisers from Indonesian batik and sold to West Africa from the late nineteenth century. Shonibare’s installation presents a version of history in which America is defined in relation to migration and fosters the playful yet meaningful experience of discovering one name after another, from Albert Einstein and Kamala Harris to Denzel Washington and Stevie Wonder.

Among the most ambitious works are two videos that diverge radically from standard documentary and narrative filmmaking: Richard Mosse’s Incoming (2014–17), which follows migrants travelling along two major pathways to Europe, and Isaac Julien’s Western Union: Small Boats (2007). Both are three-channel videos, and both display great virtuosity. Mosse’s work addresses the migrant and refugee crisis but transforms it completely through the use of a military-grade thermal imaging camera. The expressionist black-and-white look is matched by an intense sound accompaniment. Julien’s film moves in the opposite direction. Shot in colour in a series of elegantly composed frames, it shows migrants on a boat, a chaotic drowning and scenes set on a beach and in an eighteenth-century Sicilian palazzo, all put together in an elliptical manner that the artist calls ‘dreamlike’, and which draws upon avant-garde film, dance and performance.

Having gathered works that are impressive in their quality and diversity, the curators also reveal an acute sensitivity to the danger of political and artistic incorrectness. This was shown in the exhibition, where the didactic labels for individual works were supplemented with responses by individuals from the community inlcuding artists, academics, migrants and advocates, and in a curatorial statement that was added after the exhibition re-opened following the COVID-19 lockdown and the killing of George Floyd, which took place only about a mile from the museum. It notes the need for awareness of ‘whose stories are told, how, by whom, and at whose expense’. Diversity and inclusiveness are now key, and any sign of privilege and exploitation (or appropriation) is considered with suspicion.

It is easy to see why the exhibition would feature Aliza Nisenbaum’s painting of two generations of Somali immigrant women in a community garden (2017), the product of a residency in Minneapolis. This is a sympathetic study, which combines the local and the global and offers a more reassuring vision of immigrants at journey’s end. Similarly, the last work in the exhibition, Living Room (2020) by the local CarryOn Homes collective – five immigrants from five different countries – presents a small space with recorded and projected statements recounting past difficulties, along with pillows and small framed personal snapshots that provide a sense of calm and comfort after the dangerous seas and disturbing experiences so often emphasised in the exhibition.

When Home Won’t Let You Stay is not the only recent exhibition on the subject of migration. Borrowing its title from a book by Isabel Wilkerson, the exhibition The Warmth of Other Suns: Stories of Global Displacement, held in 2019 at the New Museum, New York, and the Phillips Collection, Washington, was based in part on The Restless Earth, the 2017 Milan Triennial, but with additional material on the United States and the Great Migration. What is surprising about the current exhibition is not that there should be another devoted to the subject, given the continuing global migration crisis. Rather, it is that the pandemic and the death of George Floyd have affected the art and museum world – and the world generally – so strongly. To see the exhibition now is to be aware of the heightened sense of vulnerability and difficulty that accompanies any attempt to address serious contemporary issues.

When Home Won’t Let You Stay: Art and Migration 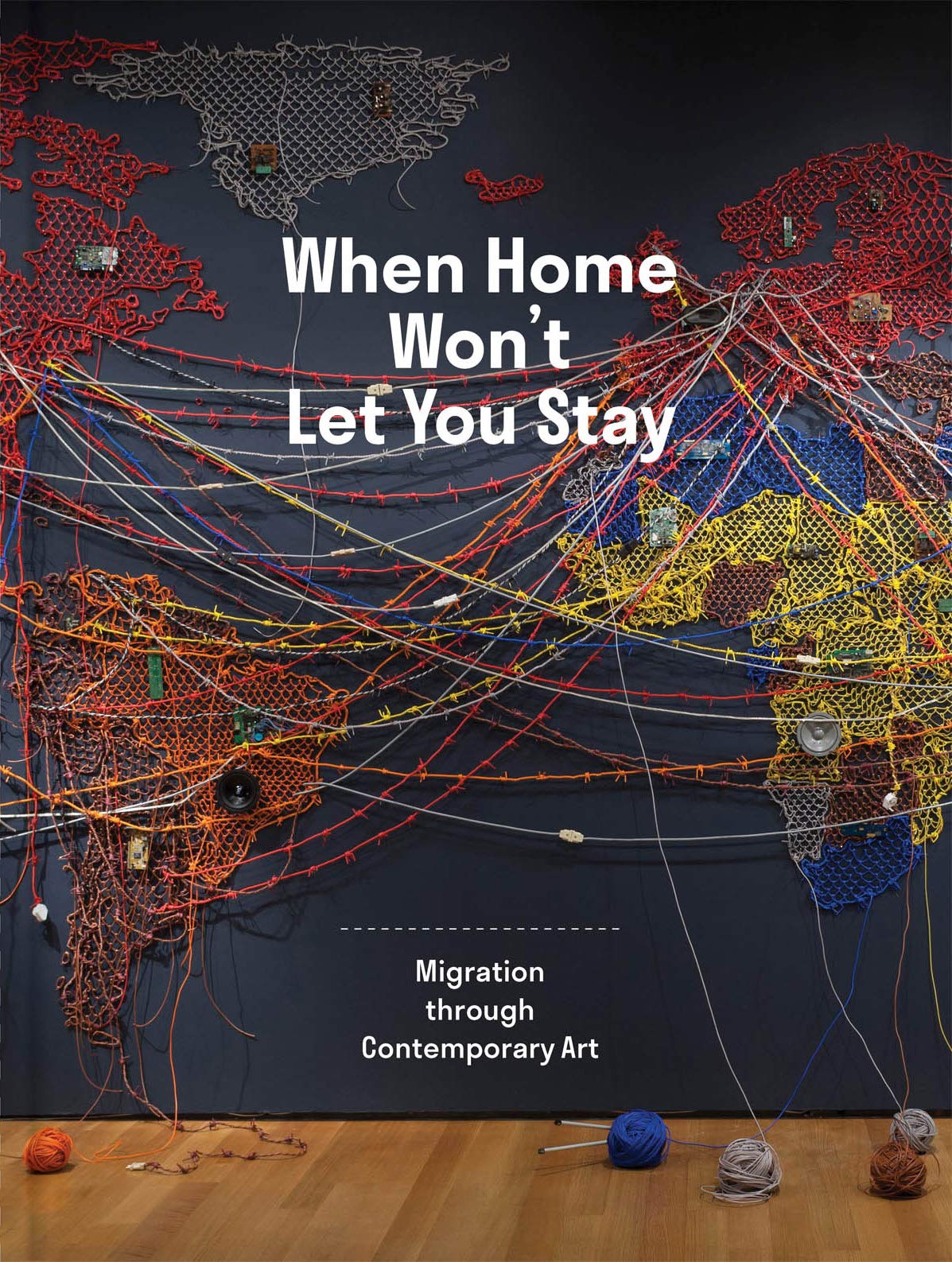 When Home Won't Let You Stay: Migration Through Contemporary Art

is Professor of Art History at the University of Minnesota.