The Roll of the Artist

The impulse to understand a work of art through the life of its creator is a constant one. However, the relationship between biography and interpretation can become complicated when the artist intervenes. In what she refers to as her ‘autobiographicatalogue’ The Roll of the Artist, produced in conjunction with her solo exhibition Türen (Doors) at Leopold-Hoesch-Museum, Düren (2nd May–8th August 2021) FIG. 1, Kasia Fudakowski (b.1985) notes the unease that the presence of the artist can provoke in certain contexts. Referencing the dearth of artist-authored texts in exhibition catalogues, she writes: ‘I think the most likely reason why there’s no “I” in catalogue, is because a viewer needs a little distance between the work and the artist’s intentions or process. At least while the artist is alive’ (n.p.). In a reflection of her intrepid œuvre, Fudakowski opts to directly explore the dangers posed by writing in the first person (most of the time at least). Fudakowski is fond of word play, as evidenced by the title of her book – the first image of which is a print of a hand flourishing a loo roll FIG. 2. Full of demotic humour and ‘dad jokes’, The Roll of the Artist offers a rich seam of narratives and a unique perspective on the artist-autobiography as a literary form.

At thirty-six, it could be argued that Fudakowski is rather young to have published an autobiography. In addition, translating the wry, absurd quality of her sculptures, installations and performances to the page would necessarily pose a challenge. Fudakowski is perhaps best-known for her sculptural practice, which incorporates a variety of materials, such as metal, wicker and salt dough. Her solo exhibition at Leopold-Hoesch-Museum centres around the ‘life-long project’ Continuouslessness, begun in 2011, FIG. 3 FIG. 4 FIG. 5, a variable arrangement of panels made from contrasting materials, shapes and colours. No one element is able to stand alone, and instead must rely on its neighbour for structural support. Installation views of the exhibition, along with other previous works FIG. 6, are reproduced in a generous selection of images in The Roll of the Artist, comprising the ‘catalogue’ element of Fudakowski’s neologism.

The publication begins, perhaps a bit unexpectedly, with the origins of the Städtische Galerie Delmenhorst, an art institution in Lower Saxony. The building was designed as a town mansion and medical practice for a doctor named Hermann Coburg, before it was sold to the city of Delmenhorst in 1973. Having recounted the gallery’s history, Fudakowski then offers a brief rumination on the artist as an agent of gentrification. This is followed by a section titled ‘Inheritance’ FIG. 7, in which she recounts details of the lives of her parents. Later, readers learn that Fudakowski exhibited at Galerie Delmenhorst years after she moved from London to Neukölln, an inner-city district of Berlin known for attracting expats. This digressive structure is indicative of Fudakowski’s methodology: creating fragmented narratives that accrue meaning through the layering of details. By not simply relying on the chronological mode of ‘I did this, then that’, the risk of solipsism that often threatens autobiographies never overwhelms Fudakowski’s complex and multifaceted narrative. The overall effect is impressionistic, but complete.

Stylistically, Fudakoswki’s vignettes bears some resemblance to the writings of W.G. Sebald, although Fudakowski’s tone is more conversational. While Fudakowski favours a casual prose register, she is not afraid to draw on her erudition. She references the notoriously pessimistic Romanian philosopher Emil Cioran as well as Søren Kierkegaard, and one does note the aphoristic influence of these writers on her writing, alongside Sebald and other proponents of autofiction. Such citations are not intellectual posturing; one of the book’s strengths is the author’s willingness to engage with influences and ‘big ideas’. Notably, Fudakowski emphasises the role of absurdity in her practice, and the word ‘failure’ appears throughout the text. This may be surprising for an artist who has, over the past ten years, seemingly excelled in her career. However, on reading, it becomes clear that, for Fudakowski, in failure and ineptitude, lies truth.

The Roll of the Artist is also enlivened by Fudakowski’s enthusiastic digressions on stand-up comedians, such as Andy Kaufman, and the careers of the early twentieth century German stage and screen performers Karl Valentin (the self-coronated ‘King of Nonsense’) and Liesl Karlstadt. Fudakowski’s writings on Valentin’s and Karlstad’s relationship – fraught with tensions and various manifestations of toxic masculinity, both on and offstage – is both especially poignant and offers Fudakowski’s most sophisticated writing about the art of performance. On Karlstadt, Fudakowski writes, ‘she is for me both the comic and the tragic hero of their story, dying and surviving in persistent necessary repetition, in constant battle with Valentin, with the roles available to her in society, and with herself’ (p.189). Fudakowski is evidently accomplished when she opts for a more evocative register; throughout the book she deploys a lucid and engaging prose. She wears her formidable intelligence as lightly as her hero Kaufmann wore his oversized foam cowboy hat.

Fudakoswki’s inclusion of Kaufman inevitably requires a discussion of his controversial popularisation of ‘Intergender wrestling’, which began in 1979 when he wrestled a woman on Saturday Night Live and declared himself ‘Intergender Wrestling Champion of the World’. Fudakowski’s relationship to Kaufman’s more unsavoury works such as these remains unresolved. She quotes David Robbins from his book Concrete Comedy: An Alternative History of Twentieth‑century (2011), in which he writes that ‘watching Kaufman could be a frustrating, irritating experience, but he compensated you for it by entertaining you twice – once in real time, during his act and a second time by puzzling over his antics long after he left the stage’.1 Fudakowski’s notes that her ‘own “puzzling” [over Kaufman] has lasted a decade so far’ (p.94). The artist does not provide easy answers, which perhaps sits somewhat uncomfortably in a period of political urgency. However, what some may interpret as tentative and uncommitted, others will understand as the contemplative ‘puzzling’ that complex issues require. This is not to say Fudakowski avoids politics; quite the contrary. For example, she devotes a significant portion of the book to Lee Lozano’s complex relationship with feminism and the radical politics of the late twentieth century.2 Kaufman and Lozano manifest as proverbial angels – or perhaps demons – on Fudakowski’s shoulders, urging her to contend with discourses both in and outside of her comfort zone. She writes: ‘the radical standard set by Kaufman and Lozano was something I wrestled with. I got obsessed. They arrested me before setting me loose to do their bidding, pushing my work in ever more painful and humiliating directions. If it hurt, I thought, it was honest and real, idealistic and bold’ (pp.94–95).

The artist as prophetic witness is not a role Fudakowski particularly courts. Nevertheless, she contends with the structural implications of her use of external labour in the production of her works at length, as well as her own relatively privileged professional position, and her undeniably privileged upbringing. In the art world, despite the public nature of sales and auctions, it is arguably still considered something of a solecism for an artist to talk about money. This is especially true if an artist speaks from a socio-economic position acquired, in part, through the money of others. These reflections on the ways in which aspiration, privilege, anxiety, the creative impulse and guilt interact are particularly urgent, and although they are treated with Fudawkoski’s characteristic amiability, the weight they bear is not lost in her treatment of them.

It is in the most traditionally autobiographical elements that Fudakowski’s text becomes most ‘literary’. It is a pas de deux of authorial perspectives: sometimes she is ‘I’, sometimes she is ‘the artist’. Her chapters are given titles such as ‘The artist sallies forth,’ or ‘The artist as jester’ and ‘Mothers’. Her early life is often narrated in the third person, by means of God’s-eye-view descriptions of her parents’ early lives and marriage:

The well-to-do banker turned film director Peter Fudakowski and his wife Henrietta had a vision for their two children. Combining their acquired wealth with that of Peter’s Polish parents, they purchased an apartment in London, which they hoped would serve as a safety net to allow their children to follow their dreams (p.20).

Such distancing devices have narratorial logic: Fudakowski was not, of course, there to experience the events that preceded her birth. However, one does also wonder if there are moments when she seeks to escape from the ‘I’ perspective and the emotional intensity it inevitably brings with it. In what is a surprising and rich book – one that seems to contain nearly everything – these shifts are narratives in their own right.3 Thus, in some ways, introspection itself is interrogated in the book. It is a true Fudakowskian absurdity: the artist divulges her most profound autobiographical insights while directing us away from herself. 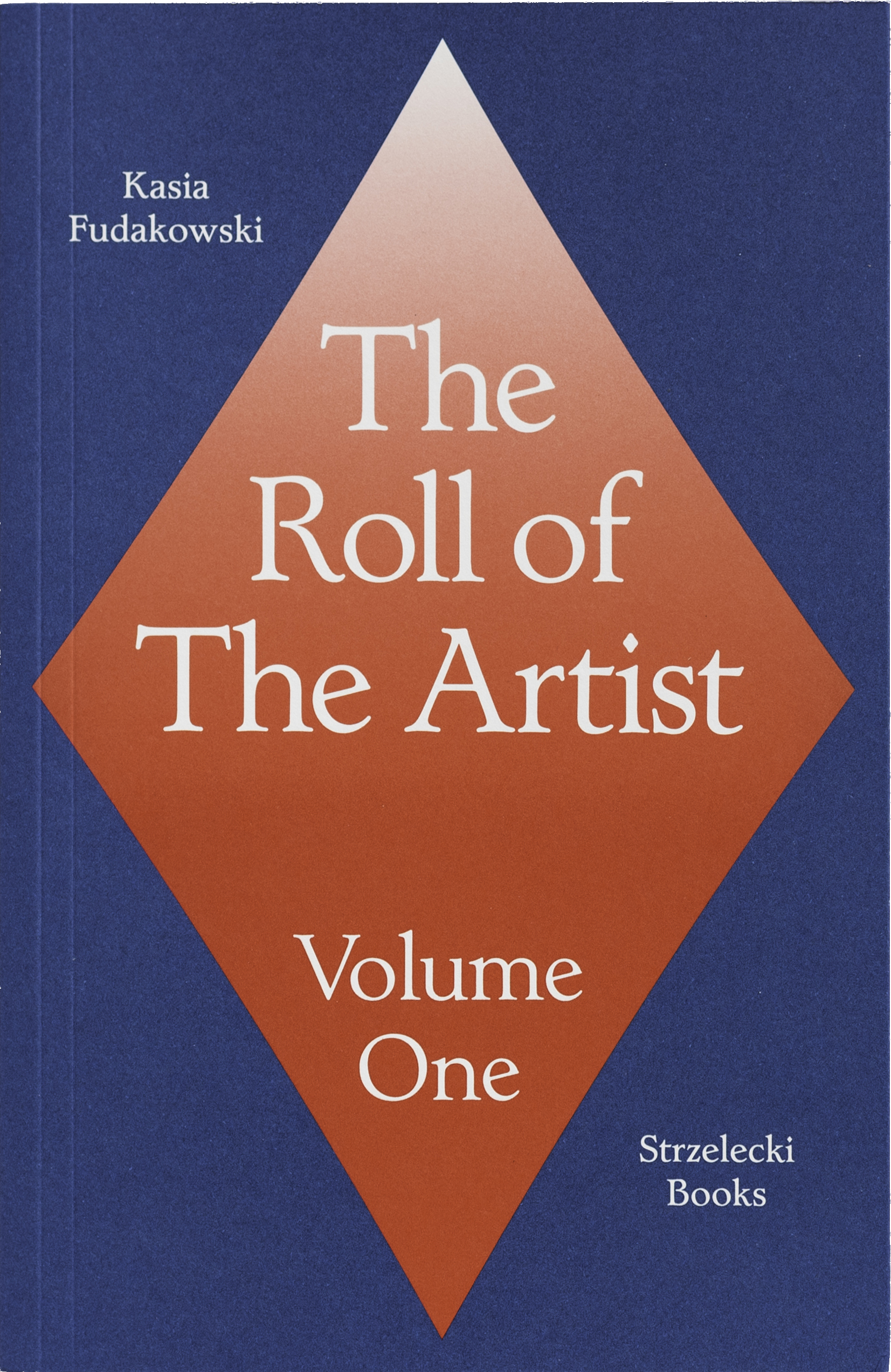 The Roll of The Artist – Volume One

is an artist and writer based between London and Berlin. He is the author of Ecology of Secrets (2013) and ULTRALIFE (2016) and the short story collection Twenty Terrifying Tales from Our Technofeudal Tomorrow (2021). His writing has appeared in numerous publications in Europe and the United States, and his collected art writings will be published in 2021 by Abstract Supply.