The artist as curator

Since the 1990s it has been common for artists to take on the role of curator, the distinction between the two titles becoming increasingly blurred, or even rejected altogether, in the current trend of artists curating biennials. While the subject of artist-curators has by no means been ignored (it occupied eleven issues of Mousse from December 2013),1 the first book-length studies on artist curators were not published until 2015.2 Alison Green’s book, When Artists Curate: Contemporary Art and the Exhibition as Medium, provides a much broader overview than these 2015 examples, albeit within a principally European and American context. Developed from her research into the exhibitions staged by the collective Group Material FIG. 1 in the 1980s,3 Green presents a narrative in which artists have paved the way in expanding definitions of exhibition making and curating.

Artists not often considered together within art-historical narratives are here grouped according to their interest in the presentation of art – their own as well as that of others. Within the book’s clear thematic structure, discussion ranges from self-defined artist-curators such as Gavin Wade FIG. 2, to instances where more traditional definitions of artist, historian and curator remain relatively stable. In Grayson Perry’s The Tomb of the Unknown Craftsman at the British Museum, for example, the differences between the three roles were underlined in the exhibition texts, and Perry’s artist’s eye celebrated. Exhibitions are viewed through the lens of curatorial studies with texts and publications by Gregory Sholette, Paul O’Neill, and Terry Smith drawn upon to position the artist curator as an oppositional figure. Extensive footnotes and a bibliography are given to aid further research and Green also makes use of interviews with curators and artists including Elena Filipovic.

The book begins by setting out the historical precedent for the artist as curator, from Gustave Courbet staging a private exhibition of his work adjacent to the Exposition Universelle in Paris in 1855, to the reminder that during the nineteenth century, most museum directors in Britain were in fact also artists. The fluidity between these roles during the twentieth century is highlighted by Green’s proposal of Marcel Duchamp as an ‘ur-artist-curator’. Duchamp’s role in the organisation and design of the Exposition Internationale du Surréalisme in 1938, for example, prefigures the shift away from the consideration of works as discrete art objects towards more context-defined readings. For one contemporary critic, art had the ‘vague role of accessory’ in this exhibition, which was dimly lit, with work hung on revolving doors and an artificial pond for its floor.

Another key historical example given is Raid the Ice Box I with Andy Warhol (1970), well illustrated with black-and-white installation photographs, where the artist was given the opportunity to curate the collection at the Museum of Decorative Art at the Rhode Island School of Design. Rather than exert authorial choice, Warhol requested that entire collections of objects be put on display. Windsor Chairs were democratically lined up on storage shelves in the stair well FIG. 3, bundles of journals were stacked on the floor tied up with string next to paintings filed away on storage racks FIG. 4. Mimicking how he found the objects in storage, his installation challenged the very definition of curation as a selection process requiring skill or judgment.

Green argues, however, that it is only since the 1990s, when artist curation became standard practice, that the key part played by artists in museum histories, collecting and curation began to receive significant attention. One of the more recent exhibitions considered in detail is Specific Objects without Specific Form (2010–2011) FIG. 5, for which the curator Elena Filipovic invited three artists – Danh Vo, Carol Bove and Tino Sehgal – to curate a travelling retrospective of Felix Gonzales-Torres at three separate venues. By drastically reducing the number of works from fifty to seventeen, Danh Vo’s display no longer functioned as a retrospective, placing more emphasis on the spatial arrangement. Green records Vo’s response to comments from viewers that his installation looked like an exhibition of his own art: ‘if you look closer at the documentation of Gonzalez-Torres’s installations you’ll discover how much I ripped him off’ (p.90). While Vo’s subjective approach differs from Warhol’s non-selective process, both are significant examples for Green of destablising practices.

Green’s central premise is that artists are given more curatorial licence and are less bound to institutional constraints than the museum curator and are therefore especially well placed to imaginatively reconfigure the exhibition format. Green emphasises that for artist-curating to retain its critical relevance, it must operate within but retain an antagonistic position towards the institution, an argument fundamental to her distinction between the artist-curator and the museum curator. The obligation a museum has to its public can lead to a situation that Green describes (citing Maria Lind) as ‘abundant didacticism’. Although Green highlights the risk of alienating a public that does not know how to participate, she ultimately celebrates the idiosyncratic connections an artist might engender in their curatorial approach.  The possible danger of this perspective, however, is a certain over-romanticising of the special qualities or experience an artist might bring to the role of curating. Exhibitions are seen as a site where knowledge is produced through experimentation, and where new networks and critical relationships formed. Although Green tends to emphasise the skills of artists in this arena, she also draws on the work of art historian Griselda Pollock, who creates ‘exhibitions’ of female artists in her writing that she believes should have taken place.

The title and focus of Green’s book binds her to the traditional categories of artist, curator and exhibition, but through Rosalind Krauss’s writings she explores the malleability of such terms. In the final pages of the book, Green spells out what can be gained from an ‘expanded field’ of curating and posits curation as an artistic practice; as a ‘post-medium medium’. 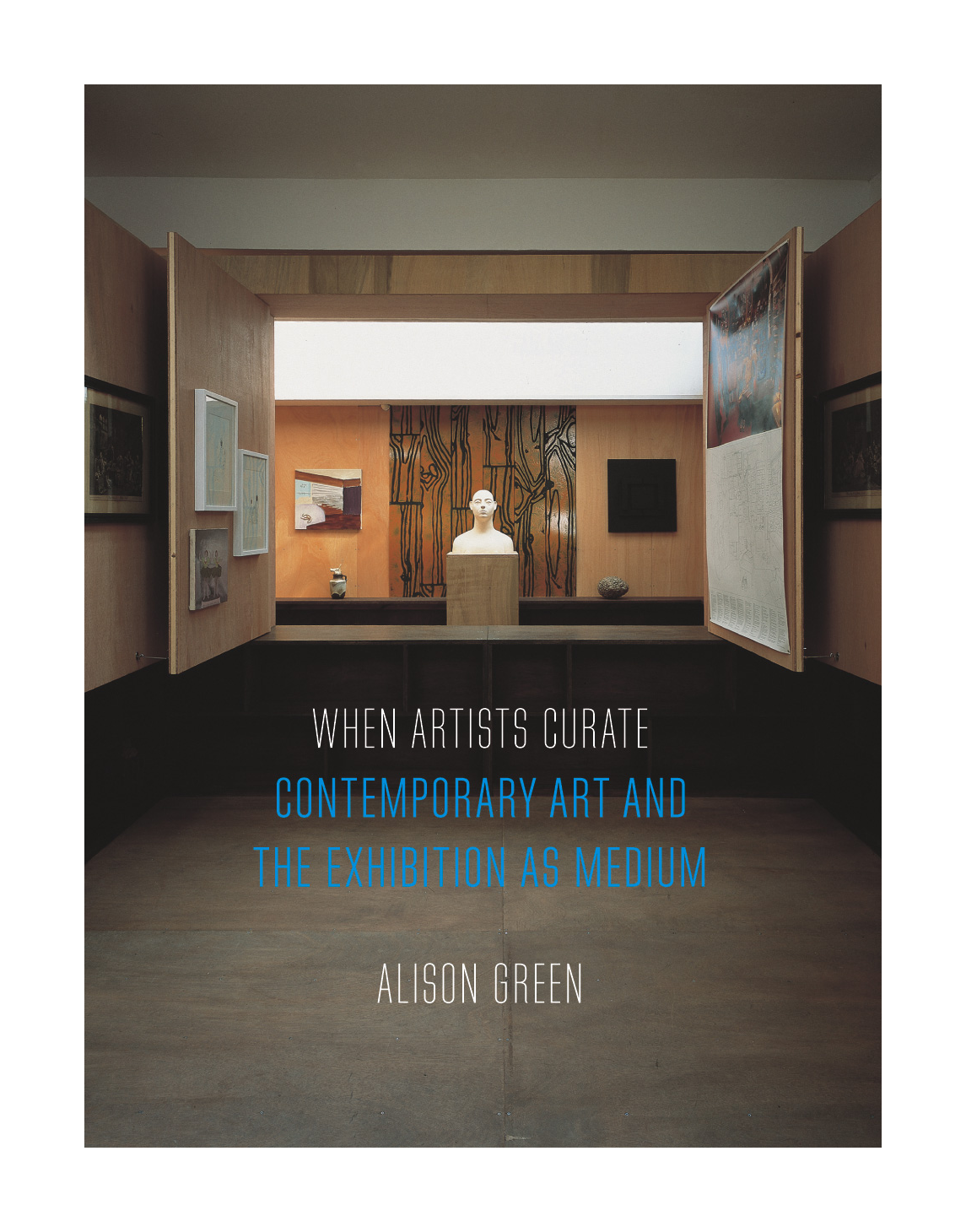 When Artists Curate: Contemporary Art and the Exhibition as Medium

Stephanie Farmer is an artist and curator based in London.