For over twenty-five years, the Asia Pacific Triennial of Contemporary Art (APT) has countered the chauvinistic rhetoric about race, ethnicity and national origin that still pervades right-wing political discourse in Australia. Now in its ninth edition, APT has become a mammoth institution. With over four hundred works on display from thirty countries and without an explicit thematic focus, the show, like so many bi- and triennials, is overwhelming.  And yet, despite the cacophony of sounds and pictures, APT9 makes so palpably clear that biennials can have, to quote Martha Rosler, ‘a mapping and even critical function in regard to geopolitical realities’ and that ‘artists have the capacity to condense, anatomize, and represent symbolically complex social and historical processes’.1

Think of Cao Fei’s latest project, which exemplifies the APT’s critical function of mapping the logic of global capitalism. Comprising a series of photographs and two video installations – Asia One and 11.11 – the project focuses on the logistics hub of Jingdon, or JD.com, an Chinese online business-to-consumer retail giant and a world leader in logistics. Asia One is an hour-long fictional video filmed in the fully automated JD.com warehouse in Shanghai. Poised between documentary and science fiction, the video tells the story of the factory’s two employees and their robotic assistant FIG. 1, who we observe through the warehouse surveillance system. Their loneliness and boredom are interrupted by random accidents and day-dreaming sequences where young dancers move among conveyor belts and automated forklifts in a style reminiscent of Cultural Revolution theatre and cinema. The soundtrack of the video mixes 1990s pop hits with 1950s propaganda music. Translated into English by subtitles, the lyrics of one of these propaganda songs celebrates Mao's Great Leap Forward: ‘Look at the pier, what a mighty sight! All the machines are lined up by the riverside. The great crane is amazing! Seeing this my heart is abloom and my eyes brim with tears!’ Cao Fei therefore presents Jingdon’s emphasis on efficiency as no less propagandistic and utopian than Mao’s dream of rapid industrialisation. Taking a documentary approach, 11.11 follows the lives of JD.com workers as they deliver products ahead of China’s Double Eleven Festival, a massive annual data- and social-media driven shopping event. As the video demonstrates, ultimately, the company’s high profits owe to the use of sophisticated technology as well as to the exploitation of low-skilled workers, who slog away sixteen hours a day under the threat of the company replacing human labour with drones and automated vehicles.

A documentary impulse animates much of the art on view. Mao Ishikawa’s gritty black-and-white photographs, for example, depict the effects of the United States’s ongoing military occupation of Okinawa. Her intimate pictures of Filipina dancers, working in local bars for the entertainment of the male clientele, are poignant documents of Okinawa’s oppressive racial and sexual politics. Equally striking is Harit Srikhao’s series Whitewash (2015–16): unlike Ishikawa’s photographs, Srikhao’s large-scale pictures are heavily manipulated and, with their brash red and pink colours, slightly kitschy. The series shows street events populated by faceless nuns FIG. 2, anonymous students and boy scouts, and brothel scenes of disturbing enigmatic figures wearing Ku Klux Klan hats. The pictures are disquieting, even horrific; the work has been interpreted as an allegory of the sadistic violence, censorship, and authoritarianism of the Thai military regime.

The history of colonialism is explored in Donna Ong and Robert Zhao Renhui’s installation My Forest is Not Your Garden (2015-18) FIG. 3.The installation is an archive of old vernacular pictures documenting the history of Singapore’s gardens, exotic flora and fauna. Several ceramic animals and artificial plants accompany the glass vitrines of Ong's and Renhui’s archive, mimicking the spectacular format of the nineteenth-century Great Exhibitions. Found photographs are displayed on uniform gridded paper – a reference to twentieth-century scientific epistemology. Some images inadvertently record the destructive effects of the rubber industry on the island while others document the careful construction of the city’s Botanical Gardens by the British colonial government – another example of the influence of Western aesthetic principles on Singapore (the Gardens designers followed the styles of the English Landscape Garden Movement and theories of the picturesque prevalent in Europe at the time). More than revealing a pristine and intact tropical wilderness, Ong's and Renhui’s archive reflects the colonial desire to possess and organise nature as a collection of trophies and simulacra.

Also exploring the relation between modern instrumental reason and violence is the work of the Korean Kim Beom FIG. 4. His incongruous fictional architectural drawings of prisons, schools, and houses for ‘tyrants’ are worthy of Michel Foucault. Beom’s design is reminiscent of the tightly organised and efficient space of Jeremy Bentham’s Panopticon, discussed by the French philosopher in his Discipline and Punish. There is an almost banal quality to Beom’s humorous and absurd drawings, which is revealing of how inured we have become to surveillance and discipline.

One of the most effective sections in the show deals with the history of Papua New Guinea. Taloi Havini’s video installation Habitat (2018) FIG. 5 sheds light on the role of Australian mining interests in the Bougainville Civil War (1988–98). The war between the government of Papua New Guinea and the indigenous population of Bougainville was triggered by the environmental and social impacts of a mining venture operated by a subsidiary of the Australian mining giant Rio Tinto. Habitat presents archival footage of Australian prospectors and mining executives exploring Bougainville and juxtaposes that footage with detailed and harrowing reports of human rights abuses committed by PNG forces during the war (these forces were trained and bankrolled by the Australian military). The section also includes a series of small paintings produced by anonymous artists from Bougainville. Executed through the technique known as fixé sous verre (‘painting under glass’) FIG. 6, the paintings depict scenes of combat, burning villages and human suffering with incredible force.

It is perhaps Qiu Zhijie’s Map of Technological Ethics FIG. 7 that best summarises this year’s Asia Pacific Triennial. First produced in ink on paper and later expanded to a wall painting, Qiu’s gigantic map shows an imaginary archipelago. Each island groups popular terms such as ‘genetic identification cards’, ‘cloning’, ‘population explosion’, ‘Anthropocene’ and ‘big data’ into a constellation of concepts that are thematically unified by broad categories (‘information’, ‘environment’, ‘bioengineering’). Despite its seemingly haphazard and chaotic nature, Qiu’s map, like other works in this year's triennial, represents an attempt to connect the specificities of the local context to the totality of advanced capitalism. Qiu’s work is a welcome return to the ‘aesthetics of cognitive mapping’ theorised by Fredric Jameson in 1988.2An art of cognitive mapping – Jameson suggested – would have the task of making viewers aware of their positions within capitalism’s global system and it would be an integral part of a socialist politics. Whether Qiu’s work and Triennial succeed or not in representing global capital remains an open question. As Alberto Toscano has remarked, ‘it is difficult to gainsay that an urgent public need to “see it whole” is rarely met by the contemporary social sciences, whose “impact” is most often channelled into governmental or corporate channels which have little interest in the disquieting, antagonistic or counter-intuitive consequences of trying to think totality’.3 To social sciences’ and the humanities’ fear of grand narratives, APT9 responds with a genuine and militant curiosity for the transformations being wrought by global capitalism. 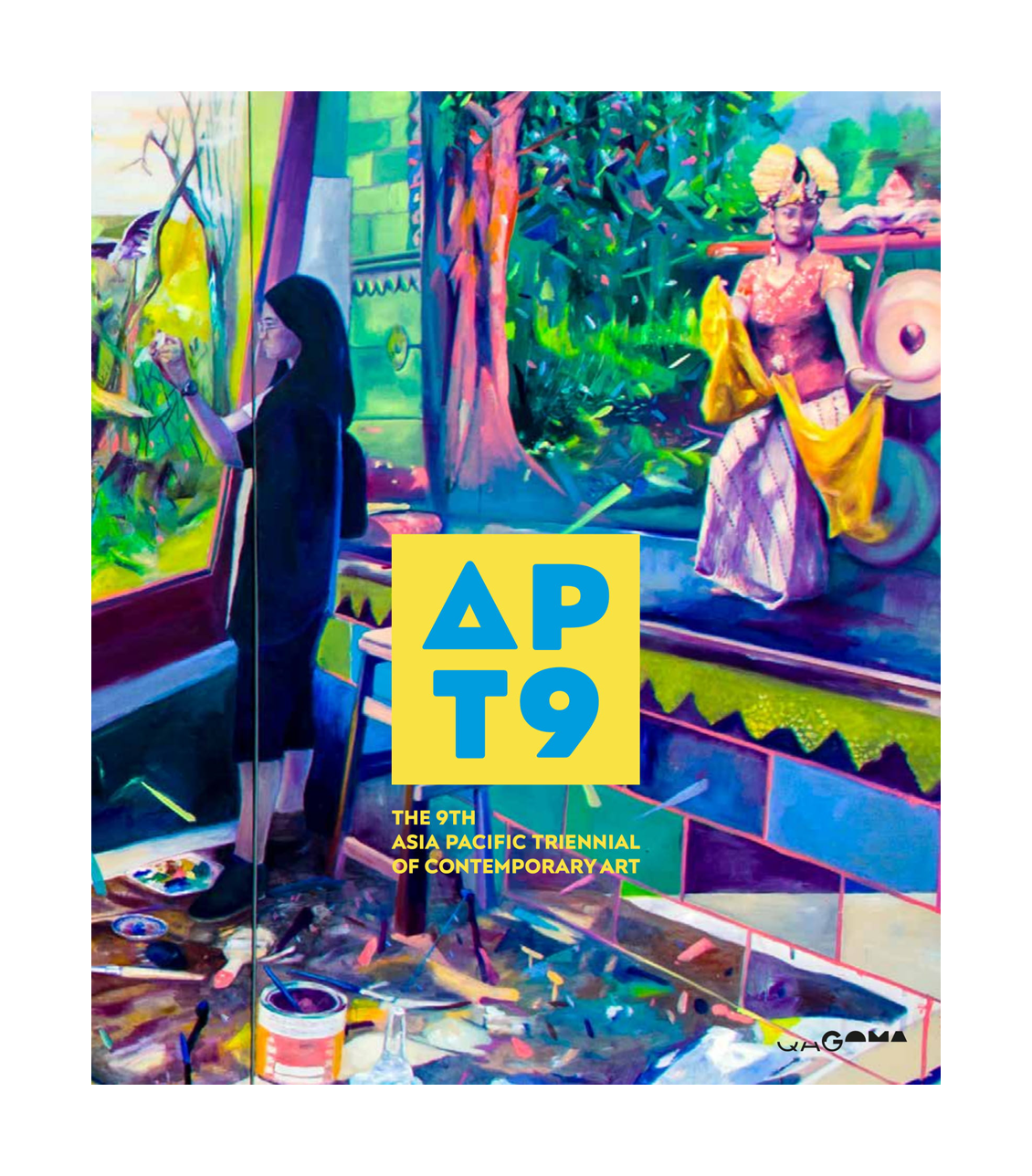 Paolo Magagnoli is a lecturer in Art History in the School of Communication and Arts at the University of Queensland. He writes widely on modern and contemporary art, with a focus on the history of experimental cinema and documentary photography. He is the author of Documents of Utopia: The Politics of Experimental Documentary (Columbia University Press, 2015).