Somewhere between the detached nightmares of the late de Chirico, the provincial working-man vistas of Breughel, and the lurid cartoon-art of early Pop, Neo Rauch’s unique and instantly recognisable style is enigmatic. It is a style best known in paint, with its disconcerting atemporal landscapes that push and play with the conventions of planar perspective. Rauch draws us into unreal and mysterious theatre scenes that reference his life in East Germany and especially to those parts spent at work, at play or with family that can feel estranged despite, or perhaps because of, familiarity. Rauch’s drawings offer us an insight into both his process and his deviant, childlike imagination.

Although they are much less known than his paintings, Rauch’s drawings have received something of a reappraisal over the last decade, at least since the publication of Wolfgang Büscher’s Neo Rauch: Schilfland / Works on Paper (2009). These works are given centre stage in the ambitious show exhibition Neo Rauch: Aus dem Boden / From the Floor at the Drawing Center, New York, having travelled from the Des Moines Art Center, Iowa (closed 6th January 2019). The display includes some 179 drawings – from an absurdist series in felt-tip pen in 1995 FIG. 1 to the large-format works on paper FIG. 2 that captivate with the same phantasmagorical uneasiness that make Rauch’s paintings so compelling.

Rauch was born in 1960, a year before the construction of the Berlin Wall, and was raised by his grandparents in the small village of Aschersleben, Saxony-Anhalt, after his parents were killed in an accident outside Leipzig train station when he was just four weeks old. He studied at the Hochschule für Grafik und Buchkunst Leipzig (where he later taught) and, alongside a generation that included Christoph Ruckhäberle, Matthias Weischer and his wife, Rosa Loy, Rauch has been recognised as an artist central to the New Leipzig School. This loosely defined group came into artistic maturity during the programmatic years of East German Socialist Realism and, while we may find something of this official style’s theatrical staging in Rauch’s works, they share nothing with its propagandist didacticism. Rauch is an artist of dreams and mystery, and yet in his drawings as in his paintings we are confronted by the material realities of German life over the past quarter century, as well as what Rauch called the ‘sediments of my past’.

Some of the drawings, such as Vernetzungsgruppe (Networking Group) (1994), feature man lost amid machinery, here oddly conjoined with impossible objects that figure the relationship between labour and subjectivity in the drab post-industrial landscapes of a reunified yet unequal Germany. Even at his most mythical, Rauch is always concerned with psychological depth. His characters’ fragile engagement with a simultaneously normal and totally alien built environment suggests silent traumas and neuroses bearing on mundane tasks. We wonder why the characters are doing what they are doing, and they do not seem to know either. In the more recent Zuschauer (Spectators) (2015), the artist at his easel is encircled by well-built men, at once threatening and disinterested, set against the uniform architectures of factory and cottage. The spectators all wear bandages or headgear, a recurrent motif of the drawings, that suggest something like a collective madness.

Other works convey the artist’s sense of humour. Rauch peeks into his character’s lives, witnessing them engaged in all kinds of strange behaviour: from the questionable sexuality of Tantentäuscher FIG. 3 in which a man sucks on a floating udder, to the sly mocking of the silly, sartorial performances of political identity in Jakobiner (Jacobin) (1998). Even when his characters are somewhat unflatteringly depicted, made to seem like they are taking their directionless lives too seriously, Rauch’s drawings have a sensitivity to the perversities of the human carnival. We come away feeling that we all share something, however uncomfortably, with their absurdities.

The large works on paper were composed vertically, with the paper stapled or taped to the wall of Rauch’s studio, on the top floor of the Leipziger Baumwollspinnerei, an old cotton mill. In Stellwork (Deputy Work) FIG. 4, a workman’s cottage and a Saxon tower occupy what might be described as the background, while a luminous green shines through in several forms – a tree, a young woman’s dress, a man’s sweater – as a father-figure cradles an adult (another recurring motif in Rauch’s work) and appears mournful, confused. As in the painted canvases, there is little evidence of underdrawing or anterior preparation in these works, despite their compositional complexity. They are positioned chronologically, charting Rauch’s development over twenty years, and provide a wonderful contrast to the far less formal, improvised sketches.

Rauch once said that he has a greater respect for drawing than for painting, which can be masked up with pigment at any time, and stated that drawing is ‘the hour of truth, the most overt baring of artistic ability [. . .] something that always fills laymen with respect – and all too often is the downfall of supposed experts’.1 Like all strange dreams, Rauch’s drawings have their own truth. 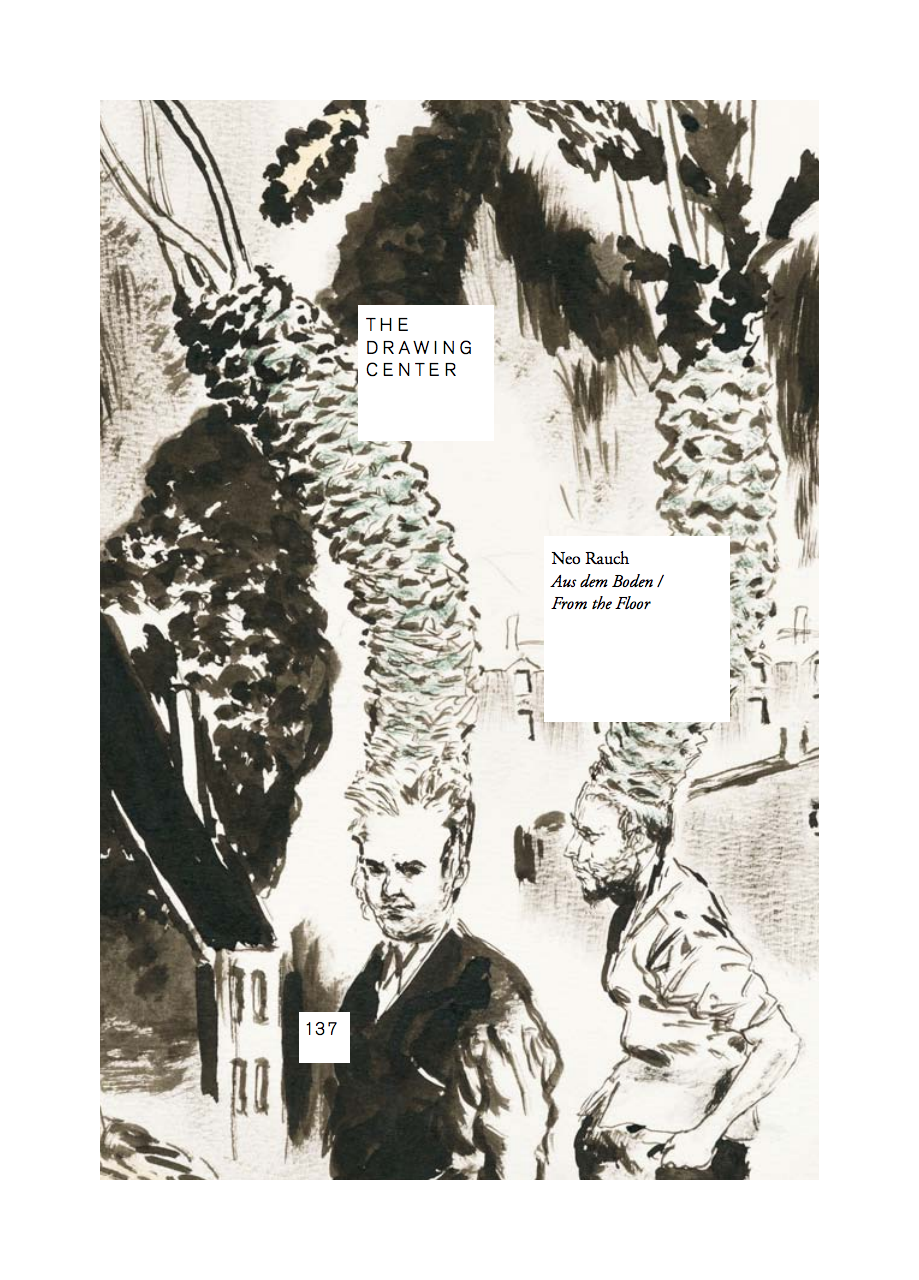 is a writer and critic. He is currently writing a book about the poet Frank O’Hara and curatorial history.