When she was about eleven Lee Bul witnessed a motorbike crash. Two young lovers rode blissfully past her as she stood opposite a bakery in Seoul; seconds later the couple were dead, sprawled on the road having been flung from their vehicle. She still recalls the blood pooling under the woman’s body. The event has had a lasting impact on Lee Bul, and on her desire that her art ‘capture that precise moment [. . .] when pure beauty suddenly gave way to utter horror’. 1

Lee Bul’s preoccupation with the relationship between beauty and trauma is central to her mid-career survey at Martin-Gropius-Bau, Berlin (to 13th January) – seen by this reviewer at its first venue, the Hayward Gallery, London –  and is as visceral in her early 1980s performance pieces as in her later Cyborg sculptures. She does not set out to aestheticise the horrific, as could be claimed of Andy Warhol’s screen prints of car crashes, but maintains the discomforting effect. Whereas Warhol creates a decorative surface of human suffering through repetition, Lee Bul has been systematically confronting that suffering for the past thirty years in works where beauty and horror are reluctant yet equal bedfellows.

Lee Bul was born in 1964 into a volatile political climate in South Korea. In 1961 Park Chung-hee had staged a military coup, installing himself as President in 1963 and enforcing martial law in 1972. It was a period of repression and restriction – laws were introduced that regulated everything from the length of men’s hair to that of women’s skirts. Labour rights were also suspended, so Lee Bul’s leftist parents had limited employment opportunities and moved around a lot. Growing up under the dictatorship, Lee Bul came to ‘distrust any kind of totalising ideas and claims to absolutes, aesthetic or otherwise’.2 Through her practice Lee Bul proposes sites of convergence, be it of materials or ideologies.

Her work addresses the political, but often through the lens of the personal. Lee Bul’s mother – who was imprisoned for thirty-six months for attending a gathering of more than five people when Lee Bul was a child – was half Japanese. Following Japan’s annexation of Korea in 1910, there began a period of aggressive re-patriotisation of the colonised population through a government initiative that focused on infiltrating Korean education and culture. Until 1945 Koreans were forced to adopt Japanese surnames, in arts institutions senior figures were replaced with Japanese nationals, Korean artefacts were destroyed, and the teaching of traditional Korean modes of making art was scrapped in favour of Japanese silk painting. At the Hayward, three unassuming silk paintings were nestled in one corner of the first room, perhaps evoking Korea’s political history and Lee Bul’s personal genealogy. An inherent violence is further asserted through the artist’s use of alien media – acrylic paint, mother of pearl and metallic pigment – onto a surface that is expecting silk paints.

Lee Bul chose to study sculpture at Hongik University, Seoul, but soon became drawn to performance, as it afforded her more opportunities to interact with other artists. Her early pieces involved bulbous bodysuits and alien-esque appendages FIG. 1, and combined a conscious rejection of traditional sculpture with the use of her body to confront the rampant inequality that persisted in Korea even after Park Chung-hee was assassinated in 1979 FIG. 2. In Abortion, for example, Lee Bul’s naked body is suspended above the audience, her flesh contorted and segmented with ropes. The piece is shocking even without the knowledge that it’s autobiographical; and is especially poignant given that it is censored in Korea, where abortion is illegal. At the Hayward, recordings of these early performances, including Sorry for suffering, were played on stacked video screens in the first room, and recreated examples of her costumes were suspended in the nearby atrium.

With her performance art Lee Bul became part of a lineage of Korean women artists and activists making a critical response to the country’s turbulent politics. From 1987 to 1991 she collaborated and exhibited with Museum, a group of experimental women artists who felt their voices stifled by the male-dominated contemporary art scene. At their inaugural exhibition, Lee exhibited a series of grotesque drawings of deformed foetuses and monsters. The Hayward illustrated the story of women artists in Korea through a mural highlighting significant events such as Let’s Burst Out, an exhibition staged in Seoul in 1988 – a benchmark in that it was the first exhibition by women-only artists in the country. A thoroughly researched and more fleshed out treatment of this trajectory is presented in the catalogue (pp.40–47).

In 1997 Lee Bul was invited by the Museum of Modern Art, New York, to display Majestic splendour FIG. 3, a wall of plastic sacks containing decaying fish carcasses encrusted with sequins. Although the show was well received, it closed early because the refrigeration system failed, causing the stench of the fish as it decomposed to leak upstairs into a Willem de Kooning retrospective. Apart from the smell, the work was notable for its contrasting materials. This clash of component parts is a common aspect of her practice – Lee Bul often uses hard shiny plastics, resins and reflective surfaces creating a chilling atmosphere, which is playfully compromised by the juxtaposition of more organic, traditionally gendered materials such as silk, fish (a symbol of fertility in Korea) and velvet. This is particularly apparent in some of the larger rooms of the exhibition, where multiple works are seen side-by-side. Lee Bul’s use of sequins in Majestic splendour are not, however, meant as an indicator of glamour or womanhood, but rather as representative of hard work, even suffering. As dissidents of the regime, Lee Bul’s parents had severely limited career options, so in the family kitchen they made things to sell, such as handbags incorporating beads and sequins.

The artist explores collective trauma in Willing to be vulnerable – metallised balloon FIG. 4, a seventeen-metre long sculpture of a zeppelin, referencing the 1937 Hindenburg disaster. In the playfully floating silver pillow we see shades of Warhol again (his Silver clouds of 1966); it is shiny and kitsch and beautiful, but there is a tension at the heart of the work – is it going to go up in flames too?

Rather than following a strict chronology, the Hayward presented the works thematically, in ‘conversation’ with the gallery’s Brutalist spaces: in one room there are cyborgs hanging from the ceiling, a deep bath of inky water and floating crystal micro-utopias, creating a multi-sensory cornucopia. The only new site-specific element of the ‘conversational’ hang is the cascade of crystals over the entrance to the building. It is not entirely convincing – although the effect produced is subtle – but it marks another nod to Lee Bul’s love of beads and sequins and their juxtaposition with unexpected surfaces, in this instance concrete. The sponsorship of this installation by Swarovski is based on a disappointing misapprehension: the artist’s predilection for sparkle is not a comment on luxury, but a memento of her parents’ toil in cottage manufacturing.

Crystals, and indeed the notion of suspension, reappear in the ‘hanging cities’ that Lee Bul began making in 2005, a number of which are on display alongside preparatory and related drawings. These chandelier-like structures, which hang from wires, are akin to architectural models or imagined landscapes. For example, After Bruno Taut (Devotion to drift) FIG. 5 shows Lee Bul engaging with the concept of utopia. Several of these works are inspired by the writings and drawings of the German social architect Bruno Taut (1880–1938), especially those published in Alpine Architektur (1919), an enigmatic utopian treatise proposing cities constructed from glass as the future setting for peaceful human anarchy.

Perhaps the most important text to the artist in putting together this exhibition, however, as suggested by its title, is J.G. Ballard’s novel Crash (1973), which follows several victims of car crashes who re-enact these accidents in order to experience ‘a new sexuality, born from a perverse technology’.3 This perversion manifests itself in the fetishised bodies of Lee Bul’s Cyborg series (1997–2011). Some are sewn from leather, in flesh tones which disorientate, others are marble-white, others are made in metal, their shiny surfaces reflecting our faces onto the bodies of our mutated mechanical counterparts. These cyborgs are about human enhancement and truncation (many are missing limbs); they are menacing but familiar; futuristic but evocative of the Classical fragment FIG. 6. They are incomplete, perhaps defunct or abandoned, but suggest bioengineering, a sci-fi vision of the future, another form of utopian thinking. Their overtly female forms shake established and potentially future ideals of beauty and womanhood.

The fully illustrated catalogue is a welcome addition to the literature on Lee Bul. Edited by the show’s curator, Stephanie Rosenthal, it includes a number of insightful essays as well as excerpts from interviews. The success of Lee Bul is in her artistic diplomacy. She asks serious questions of her audiences about the human psyche, but balances these interrogations with moments of lightness – perfectly exemplified in her single-person karaoke cabin Live forever III FIG. 7. She constantly confronts us with our own reality, be it through the reflective surfaces of her larger mirror works, or the echoes – in the installation work Bunker (M. Bakhtin) (another nod to literary theory) (2007/12) – of our own fading footsteps. 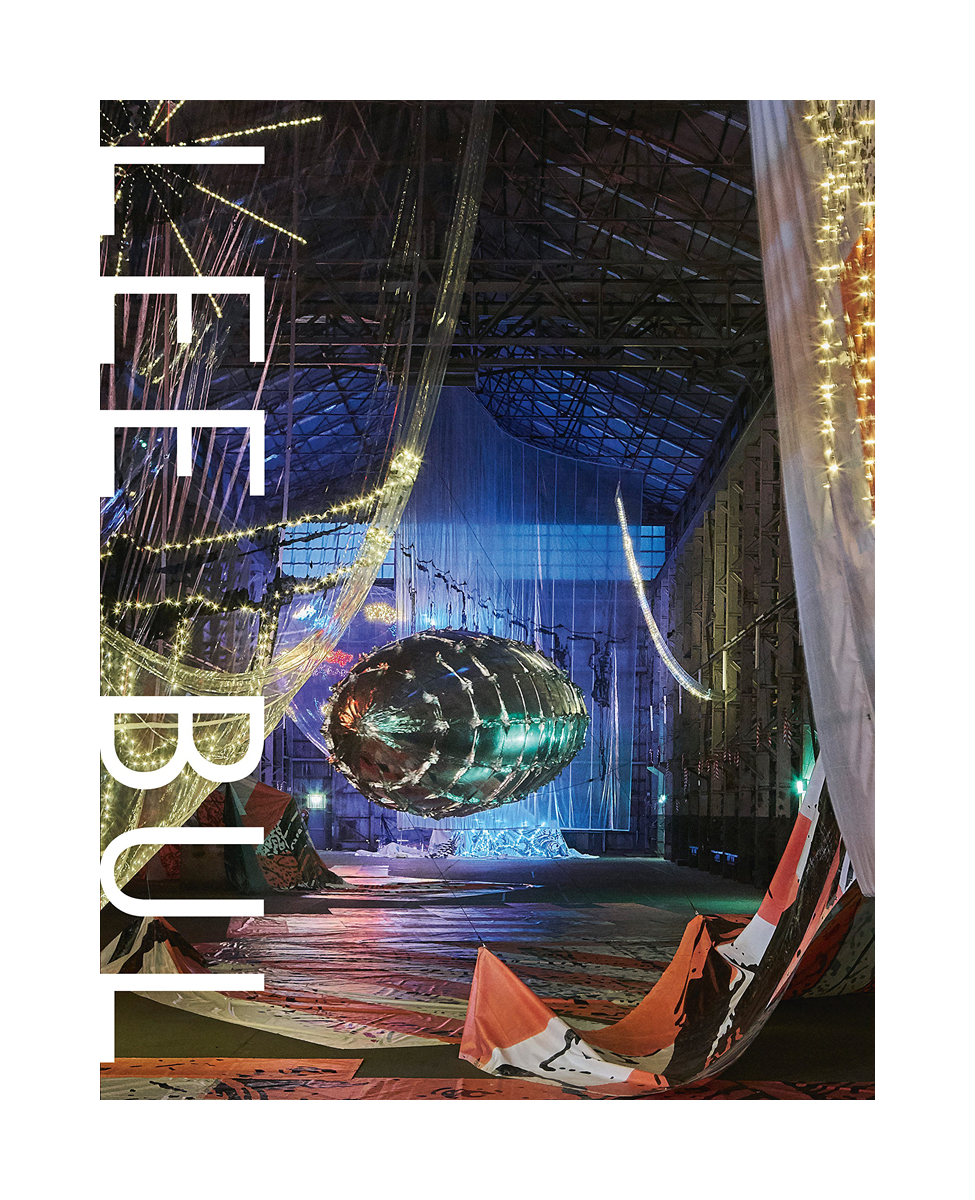 is Assistant Articles Editor at The Burlington Magazine.