In her foreword to the catalogue for Cecilia Vicuña, a retrospective exhibition, Sofia Hernández Chong Cuy, the Director of the Witte de With Center for Contemporary Art, Rotterdam, writes with enthusiasm, pleasure and a certain amount of righteousness about showing Vicuña’s art. She describes the exhibition as part of the process of ‘mending’ art history, both through simply showing the work of an underrepresented artist and by attesting to the meaning of the work. This is by no means a unique approach and over the last few years many of the main benefactors of this art-world revisionism have been the ‘old ladies’ so far ignored. The irony of the rhetoric of the ‘undiscovered’ septuagenarian, octogenarian and even nonagenarian artist seems lost in the passionate disbelief that these women could have been overlooked for so long. The idea that their works have been neglected or rejected because they were not taken seriously in their youth is repeated in chorus, without the recognition that this might have been because the works themselves challenged the status quo. Museums and galleries seem to want to travel on the coat tails of this challenge, meeting audiences who are angry with political and social affairs and perhaps critical of predominantly normative museum collections, with exhibitions that expose those art-historical blind spots and close them by placing historically radical work squarely in their galleries.

That is not to say, of course, that many of these exhibitions are not to be welcomed as the cool water in a drought they usually represent. They are often the product of the hard work, research and negotiation of directors and curators who believe these works deserve an audience. They have also been revelatory: locating works thought lost, conserving them and giving them new life. The question that remains is whether these exhibitions will force a change that shifts the terms of meaning beyond value. The problem with many of these revisionist efforts is that they still cleave to the values of originality, scale and charisma that have too long elevated a narrow demographic of artists to stratospheric fame. The Witte de With exhibition is one of a few such efforts that genuinely sets aside and sometimes even contends with established ideas of artistic significance. Instead this work retains its interdisciplinarity, its unruliness and its politics.  It is there in the snubbing title of the exhibition catalogue, Seehearing the Enlightened Failure: this is a body of work that takes issue with the deep tissue of Western European perception and offers something different.

Cecilia Vicuña was born in Chile in 1948 and lived there until 1972, when she moved to London to study at the Slade School of Fine Art. In 1973 she went into exile in London after the Chilean coup d’etat. In 1975 she moved to Bogotá, and five years later to New York, where she has lived and worked ever since. The Witte de With exhibition is billed as Vicuña’s first retrospective, but she has had a number of exhibitions and commissions in the last few years that have built up the significance of both the existing work and situated Vicuña as practising artist. She has long worked in the seams between politics, spirituality, sexuality and ecology, and between the visual arts and poetry, but it is only now that this complex practice finds a ready audience.

The curator of the exhibition, Miguel A. López, distinguishes the current exhibition by prioritising the work Vicuña made in Chile, London and Bogotá before moving to New York. But the exhibition opens dramatically with the recent work Menstrual Quipu (the blood of the glaciers), which consists of thick bolts of dyed red wool hanging from the ceiling FIG. 1, looped around a cube monitor on the floor, which plays documentation of Vicuña in the Andes. This grounded monitor, bound with the ascending wool, invites the viewer to get down on the floor and be proximate to the Andean ground that Vicuña sifts through her hands in the video. The effect is to feel oneself connected in a larger system of flows ecological and bodily, bound like the monitor in the quipu’s enveloping strands.

After this initial immersion in space and place, the exhibition unfolds with more traditional displays, organised roughly by period and form across six galleries. In one room, three banner paintings, made in Bogotá for an exhibition at Fondación Gilberto Alzate Avendaño in 1977, hang in the middle of the space. These are not the battle-worn, heavy cloth banners of the protest or parade, but paintings on light fabric that look crisp despite their age. The first, Homage to Vietnam FIG. 2 shows two women, one in Latin American indigenous dress facing the viewer, the other a member of the Viet Cong. The latter, whose back is to the viewer, extends her hands to the woman opposite, offering her a gun and a book titled The August Revolution (referring to the 1945 revolution in Vietnam). The message here is solidarity in revolutionary struggle, from one successful fighter to another hopeful one. The pairing also clues us in to the women’s common enemy: the United States, who conducted covert assaults on a number of Latin American states, including Vicuña’s native Chile. The work combines the forms of realist painting and the declarative banner but on a different affective level to most images of revolution and insurrection. It insists on at least the show of violence, but communicates this is as a temporary necessity, with arms to be given up and passed on when the battle is done. Vicuña does not seek to inspire through the promise of guts and glory, but through struggle both violent and cultural. In equal parts hopeful and absolute, Vicuña’s banner is the visual equivalent to Malcolm X’s Sartrean promise in 1964 that civil rights would be achieved ‘by any means necessary’.

The works on display in the next room are from an earlier moment, when Vicuña’s politics were catalysed by the 11th September 1973 coup d’état in Chile, which saw the democratically elected socialist leader Salvador Allende removed from power by Augusto Pinochet. Vicuña was a follower of Allende – works in the next spaces attest to the pre-coup work – but she was in London when the events took place. After her studies she gained political asylum in the United Kingdom but felt the anguish not only of the defeat of socialism in Chile, but also of her distance from the struggle. In response Vicuña published a book of poetry, Sabor a mí [Taste of me] FIG. 3, which she had written some years earlier. Re-written, the book was now ‘a howl of pain’, to use the description of its publisher Felipe Ehrenberg, who ran the collective avant-garde Beau Geste Press in Cullompton, Devon. The book is represented in the exhibition by its cover and a number of page spreads in vitrines. It is tricky to convey the power of this work. It is certainly visual – made of handmade paper with each page collaged – yet so much of the tension is in the text, which is written in both Spanish and English, underscoring Vicuña’s alienation and perhaps hinting at the involvement of foreign powers in the coup.

The painful lament in Sabor a mí finds a parallel in works from and documentation of Vicuña’s art activism in London. There is another banner the artist made with John Dugger, which proclaims ‘Chile Vencera’ and was used as the backdrop for a rally in Trafalgar Square and a reconstruction of Vicuña’s La Ruca Abstracta (o Los ojos de Allende) [The Abstract Hut (or The Eyes of Allende)] FIG. 4, originally made at the Royal College of Art for the Arts Festival for Democracy in Chile. Vicuña co-organised this ambitious event with Dugger, the writer Guy Brett and the artist David Medalla in order to raise political consciousness and money to support protesters in Chile. La Ruca Abstracta is a makeshift shelter, which the viewer is invited to enter and look out from through Allende’s eyes through shafts cut into a painting of the socialist leader that makes up one side of the structure. This work is a physical enactment of solidarity, which, like the festival itself, invites the visitor to enter into the fold. The pain of Vicuña’s separation from Chile around this time also manifested in her site-specific installation Pueblo de altares, which features her Precarios sculptures FIG. 5. Made of detritus, they are presented in two dense groupings on the floor and wall of another gallery. The repurposed materials act as vulnerable traces of the artist’s presence, little pieces of manipulated environment that anchor her despite displacement FIG. 6.

If exile motivated Vicuña’s explicit activism, then like the room of Precarios, other galleries show Vicuña’s continuing experimentation to define the best means of making her politics sensible. In one gallery, López gathers together a number of Vicuña’s early paintings and corresponding ‘explanations’ written by the artist. These include works she described as ‘heroic’ portraits – one of Lenin and another of Allende and Castro FIG. 7 – as well as her Menstruation Angel FIG. 8 and the incredible Janis Joe (Janis Joplin and Joe Cocker) FIG. 9, which is accompanied by an eight-page text that ambles through the universe depicted in the painting. The work itself is somewhere between a comic book and an illustrated manuscript, and the accompanying explanation extends from the autobiographical – ‘Joe Cocker’s music sets me on fire’ – to the desirous – imagine a world in which sexuality was free – to the allegorical and the political – Angela Davis escaping from prison in the centre of the painting, above a women’s liberation march. It is a vortex of passion – erotic, musical, political, artistic – that feels full of youthful exuberance. It is also a representation of the complications of lived reality and political identity; specifically, the non-contradiction between heterosexual romance and lesbian sex, and the simultaneous love for American music and hatred of the American state.

Vicuña’s politics plays out differently in her Palabrarmas text works, which she began in London and developed in Bogotá FIG. 10. Although concurrent with Conceptualism, they are far from the form of the document or the ‘aesthetic of administration’. Rather they are illustrations of portmanteau, or what Vicuña calls ‘word weapons’. The title of the series also translates as ‘word weapons’ (‘palabra armas’), but through her illustrations the words metamorphose to produce multiple meanings: palabra (‘wordwork’), or palabrir (‘wordopen’).1 Formally these works are the clearest instance in Vicuña’s œuvre, excepting Sabor a mí, where her visual art meets her poetry. For most of her career these two aspects of her practice have met a divided audience. Poets are familiar with her publications, her editing and her readings while artists tend to be better acquainted with the plastic works and performances. Interestingly, the Palabrarmas have received scant attention from either group, registering the difficult meeting point of language and image. Yet this is where the significance of Vicuña’s work resides, dense with the texture of ‘seehearing’. The Witte de With exhibition offers an unprecedented opportunity to engage with much of Vicuña’s work, but even this retrospective cannot contain it. Perhaps the exhibition format will never be able to describe such rich and challenging work, but the realisation of an exhibition’s limits is surely part of the point. How else can we resist the capitulation of Vicuña into the starry cosmos of the unfairly undiscovered artist and continue to ‘seehear’ the enlightened failure? 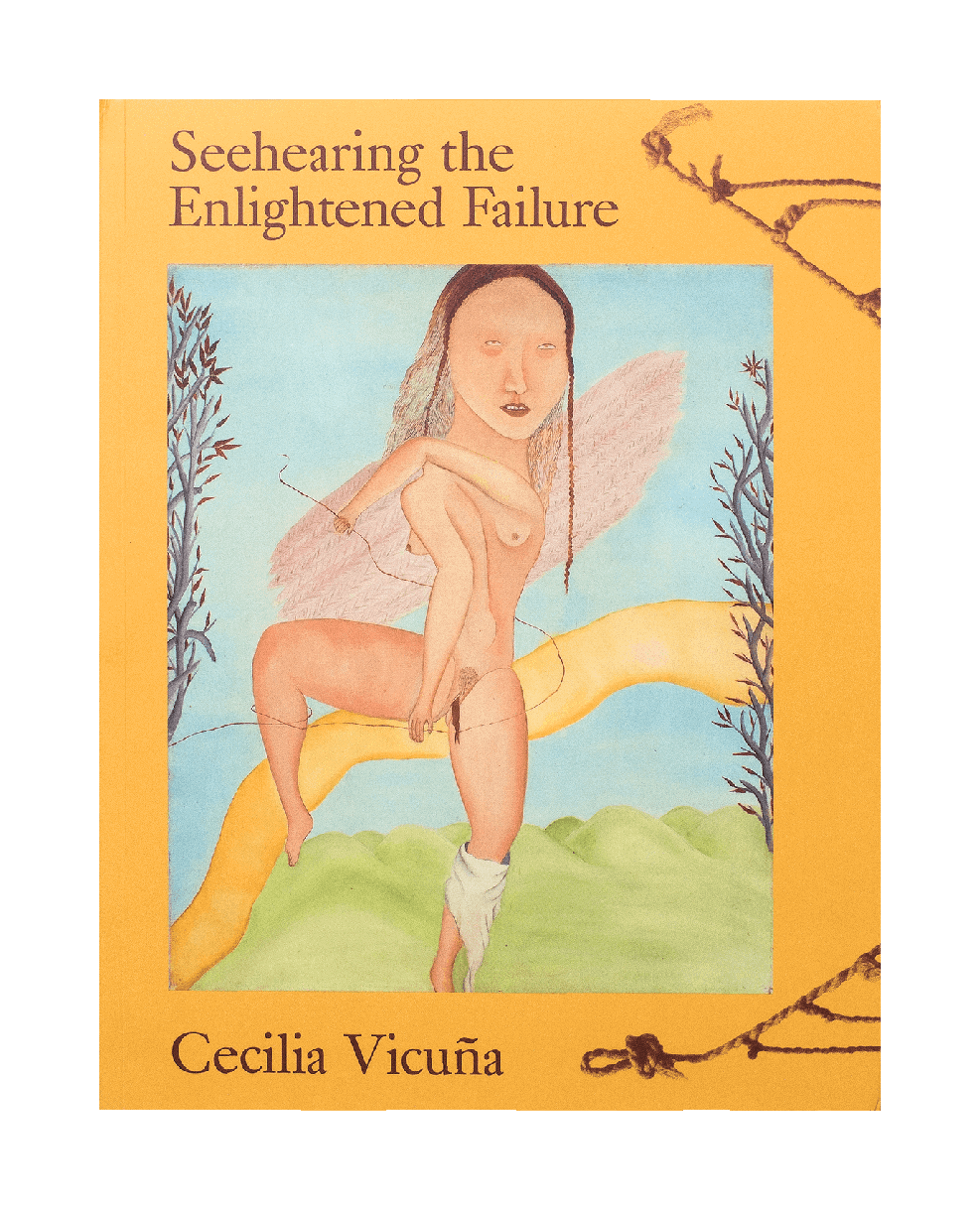 Edited by Miguel A. López