Still I Rise: Feminisms, Gender, Resistance is an exhibition in two acts, beginning at Nottingham Contemporary in autumn 2018 and concluding in Bexhill-on-Sea at the De La Warr Pavilion in spring 2019. The exhibition takes protest, politics and activism as its central theme, with the roster of artists, works and themes reconfigured at each institution. In response to the durational character of the exhibition, this review will also be in split into two parts. This, the first, addresses Act I at Nottingham Contemporary.

This first act responds to Nottingham’s ‘long history of resistance movements’ (think of the anti-feudal sensibilities that led to the legend of Robin Hood, Luddism in the nineteenth-century and the Nottingham race riots in 1958) and in its displays foregrounds ‘printmaking, craft, speculative fiction, ritual, ecology, direct action and performance’. The city and its rich histories provide the basis for an exhibition that ricochets outwards in many different directions, as far as the Paris Commune; the Oracles of Delphi as imagined by Jesse Jones; Argentina, through Eduardo Gil’s photographs of the 1983 Siluetazo demonstrations against disappearances in General Jorge Rafael Videla’s regime FIG. 1; and San Francisco, with Phyllis Christopher’s photographs of Women’s ACT UP protests in the 1990s. The connecting thread is action, indicated by the resilient resistance described in the exhibition’s title, taken from Maya Angelou’s poem of the same name, as well as by the description of its two-part structure according to the theatrical language of ‘acts’. Action materialises across the exhibition through protest, performance, spells, choreography and artists’ re-activations of history. The other organising principle is purportedly feminism, although it may be more accurate to describe it as the ‘disorganising principle’. The curators, Irene Aristizábal, Rosie Cooper and Cédric Fauq, write that they seek to ‘discard linear models of progress’, and instead bring together ‘ideas across time and space’.

This feminist disordering is traced out in a diagram in the exhibition hand-out that connects artists to each other under different themes including ‘self-organisation’, ‘rituals’ ‘intersectionality’, ‘trans’, ‘womxn’ and ‘queer’ FIG. 2. The diagram maintains something of the messiness usually rejected early in the curatorial process, bringing it into the gallery as a means of interpretation. This conceptual map is juxtaposed with a map of the gallery spaces and a glossary of terms, pointing to the tension between order and disorder so often at the heart of feminist work.

Still I Rise is organised non-chronologically into thematic sections, showing that ideas usually associated with recent developments in feminist thought and activism were in fact evident at earlier moments. This non-teleological approach to history has important precedents in earlier feminist exhibitions that have sought to draw out connections across generations and geographies. For instance, WACK! Art and the Feminist Revolution (2007), which focused on art of the 1970s, gathered artists and works together by their approaches to feminism, while Catherine de Zegher’s Inside the Visible: An Elliptical Traverse of 20th Century Art in, of and From the Feminine (1996) was structured as a series of thematic sections, further divided into three historical moments in the twentieth century, rewriting histories of Modernism and contemporary art.

Perhaps what stands out in Still I Rise is its break with Postmodernism and with more familiar coordinates of histories of feminist art and activism. Take, for example, Judy Chicago’s little-known atmospheric performance work  from 1972 FIG. 3, displayed at Nottingham through its photographic documentation. Painted bodies let off plumes of pigmented smoke in the desert – a very different way of working that is closer to body art than the abstraction or ‘cunt art’ for which Chicago became well known. The exhibition is also notable for its focus on class, grassroots activism, race and sexuality, which have often received only scant attention in other exhibitions but are here central to the curatorial narrative. It was great to see Jackie Collins and Pat Garrett’s Roots and Bootstraps (1982) again. This re-visioning of snakes and ladders from a working-class feminist perspective is an important document of feminism’s exclusionary tendencies, and was also included in Andrea Luka Zimmerman’s installation in the London Open at the Whitechapel Gallery earlier this year. But the most important achievement of Still I Rise is its expansion of feminism as a political identity. Here feminism is ungrounded from the biological identity ‘woman’, (or the troublingly essentialising ‘womyn’) and instead populated by ‘womxn’. The curators note that womxn is:

A spelling of ‘woman’ that not only sheds light on the prejudice, discrimination, and institutional barriers womxn have faced. It also expresses that womxn are not the extension of men (as hinted at in the Old Testament account of Adam and Eve) but their own free and separate entities. Womxn also includes trans-women, who were excluded by some feminists in the 1970s who were using the variation ‘womyn’.

Still I Rise is realised in collaboration with the graphic design collective OOMK, with exhibition design from the New York-based feminist architecture collaborative, f-architecture. Nottingham Contemporary’s four galleries are divided by curved and rippling walls, demarcating discrete, intimate spaces in which to view groups of works, as well as dividing film-screening spaces from other displays FIG. 4. There are also temporary gridded walls that function like community centre corkboards, onto which are pinned reading materials, posters and other ephemera. Curved benches transform the gallery into a potential space for reading and talking, while similarly curved vitrines FIG. 5 showcase archival materials including photographs of women from the Paris Commune, documentation of suffragette protests and issues of the nottingham women’s diary and Dragons newsletters from the 1970s and 1980s. The exhibition design provides continuity to knowingly disparate ideas, artefacts and works of art. The display is particularly effective in its distinction between the historical materials, which are protected under glass, and the contemporary texts and zines available to pick up and read or, in the case of Linda Stupart’s spells, to use. The sense is that while all these stories may be gathered together in the gallery, they are not all there under the same terms.

Many of the works in the exhibition are concerned with the status of feminist histories. Ramaya Tegegne’s wall mural, for example, is made up of pages of reprints of the classic feminist health manual Our Bodies, Ourselves FIG. 6, while Alex Martinis Roe’s work traces narratives of feminist art and activism in Australia. Pauline Boudry and Renate Lorenz’s Charming for a Revolution (2009) – which sees Werner Hirsch reciting 1970s socialist feminist texts in a Berlin zoo – gestures to queer temporalities and contemporary artists’ recent investment in the political efficacy of re-enactment, also evident in Joan Jett-Blakk’s invocation of Black Panther iconography for her presidential campaign poster FIG. 7. Ana Mendieta’s Silueta series (1973–81) and Blondell Cummings’s Chicken Soup (1981) invoke ancestral histories through body art and choreography respectively, while Ellen Lesperance’s gouache paintings (2013) offer patterns for the recreation of knitted garments worn during ‘acts of civic disobedience’, one of which hangs close by. Whether through labour-intensive recreation, archival pillage, citation, research or embodied experience, each work transgresses the boundaries of objective history, evidencing a longer, feminist commitment to these practices of historical care than most theorisations of the archive, or re-enactment as a strategy for contemporary art have allowed. The presence of rarely exhibited historical works, such as Margaret Harrison’s Common Land/ Greenham (1989) and Alice Constance Austin’s Constance City Plan (c.1916) further complicate temporal registers as they appear so alarmingly fresh. Indeed, the futurity evidenced in Harrison’s and Austin’s works – both artists seek to articulate a better world through anti-nuclear protest and urban and architectural design respectively – speak to enduring concerns over warfare, ecology and property relations.

The exhibition is divided according to different modes of activism into four sections. The first, ‘A Rumour: Collective Wisdom’, concentrates on grassroots activism and includes banners, posters and zines; the second ‘A Spell: Feminism Beyond Humanism’, includes work engaging with themes of magic, mysticism, ancient history, witchcraft, fairy tale, science-fiction and the non-human. The third, ‘A Dance: No Woman is an Island’, focuses on occupations of space both embodied and social and the fourth, ‘A Call: Making Our Voices Heard’, offers examples of political speech. Each is concerned with the collective, sometimes tracing shared histories, at other times creating a sense of collectivity between the works gathered in the galleries. There is much energy in these groupings and radical juxtapositions, but there are also palpable absences, strained coalitions.

The presentation of the gallery as an active space, along with the activism of the works included, puts forward a different approach to feminist art and art history, one that leaves behind concerns such as the body, the problem of visual representation, the frustrations of domestic politics and the boredom of the housewife, issues that have previously been made primary. Indeed, home is only referenced in Hayv Kahraman’s large painting of fleshy figures haunting a Baghdad domestic floorplan. The feminism presented here goes far beyond women's liberation, as if the womxn featured are not bound in places of limitation and oppression, they are striving and struggling; they are active. 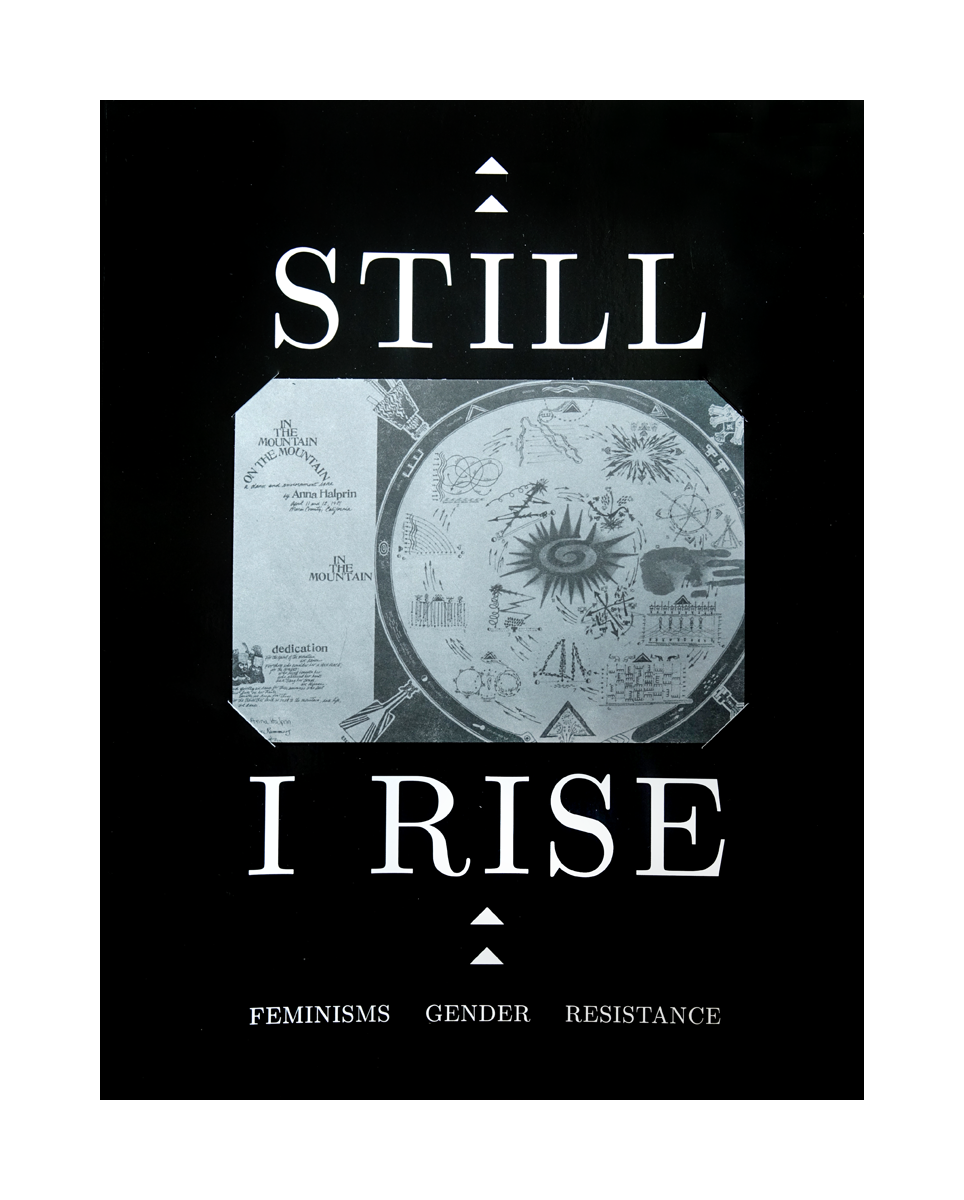 Designed by One of My Kind (OOMK)