Woven through the academic essays, curatorial reminiscences and artists’ statements that make up Artists’ Moving Image in Britain Since 1989 is a dramatic narrative of dissolution and reformation. It charts the dissolution of discrete media in a digital age of spectacle and weightless distribution, in which the past is collaged and recycled, and of the national avant-garde culture of structural film and Brechtian aesthetics, which was, through the postwar period, set in hostile contention against mainstream screen culture (television and cinema) and sometimes also against mainstream political and market structures. Following this dissolution, political, institutional, technological and social forces aligned to produce something – here called ‘artists’ moving image’ – that may be at home in the gallery, screening room or social media channel; it is multimedia, no longer quite national, and may indeed be a described as a ‘citizen of nowhere’.1

This art of the lens went from being a marginalised and specialised area of culture to become a central part of museum, art gallery and especially biennale display. In the 1990s projector technology freed video from confinement to the television set, allowing it more easily to become a component of installation art; museums, including Tate, began to collect video art FIG. 1, as did slowly and in small numbers private collectors; while new commissioning bodies exposed small, local groups – some radical in their aesthetics and organisation – to neoliberal audit and accountability measures. As Dan Kidner’s essay shows, their particular avant-garde characteristics, as seen for instance in the work of the London Film Makers’ Co-op, evaporated under the harsh funding and institutional regimes of this new, business-friendly dawn.

In this retrospective view, it also becomes apparent that film and video was often the recourse of those who had good reason to question the character and trajectory of the British state: it was a very important arena for Black artists (John Akomfrah, Isaac Julien, Keith Piper and Steve McQueen, among others); for artists from the subaltern British nations, especially Scotland and Northern Ireland (for example Willie Doherty, Luke Fowler and Mairéad McClean FIG. 2, whose father was imprisoned without trial under the internment programme); and for artists from working-class backgrounds coming to terms with the devastation of their livelihoods and communities. As Mark Leckey puts it, discussing his use of found video to exorcise a polluting past: ‘Coming from the North West, you grow up in a land of ghosts, haunting the ruins of industry, and that produces a ghoulish morbidity with things recently dead’. Indeed, it is Thatcher’s unquiet ghost that haunts much in this book, from the globalising forces that made her political turn possible to deindustrialisation, authoritarianism and racism, along with cuts in arts funding and the exposure of arts institutions to the market and private patronage.

The essays fix on different aspects of these changes: Rizvana Bradley writes of Black film aesthetics, in its combination of hybridity theory with a deep knowledge of the filmic avant-garde, and its struggle against the Tory potion, unveiling the radical social warfare that lurked behind Thatcher’s apparent traditionalism; James Boaden examines British work that dwells on irresolvable social antagonisms, especially in a fine reading of Julien, whose reflections on race and gay sexuality stand in contrast to the simpler and more positive views of some North American critics FIG. 3. Melissa Gronlund maps the critical arm of moving image in the ‘young British art’ generation and the way that it was used to question the national culture.

It is a chastening experience to read this collection at a time when Britain’s newly installed radical Conservative government pursues separation from the European Union. Many of the developments that transformed the film and video discussed in this volume also took place across the globe. In the past, British artists’ video- and filmmaking arguably had a distinct national flavour; and many artists point to the importance of British filmic traditions in their formations, especially such names as Peter Gidal, Derek Jarman, Laura Mulvey and Peter Wollen. While the nation may be taking a recidivist turn towards exceptionalism and regard for the Empire, the artists generally perform the globalist line that has made them: Tacita Dean, commenting on her work Where’s England? remarks, ‘But really, where is it? Brexit is a monumental mess’.

The book is weakest on the effects of the internet and social media, which threatens to undermine artists’ moving image gallery-bound globetrotting in favour of the eternally available and the instantly forgotten. What is to be made, for example, of Oreet Ashery’s episodic launching of Revisiting Genesis FIG. 4, her videos about death and online memorialisation, like a soap opera? In what way will instant visible feedback effect the already evident turn in much moving image work towards entertainment? The least graspable of all these components, and the one most threatening to national cultural specificity, is the least explored here.

The deep indeterminacy of the resulting nexus of technologies, institutions, markets, display systems, cultural producers and consumers (and indeed prosumers) is condensed in the term ‘artists’ moving image’ (a particularly British solution, first adopted by the Arts Council). As the editors point out, it can cover anything from an elaborate film, with near-Hollywood production values using professional actors (Julien), to videos made, edited and distributed by one person from a single room (Leckey). The term also carries with it a convenient sleight of hand which shifts the zone of depthless ambiguity to the question of ‘art’ and the ‘artist’, a black hole of definition from which no light is likely to escape. 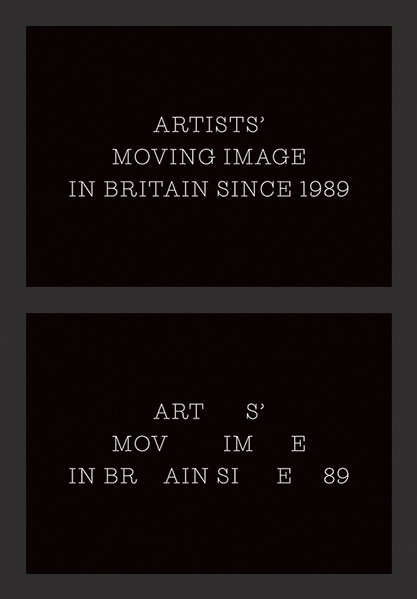 Artists’ Moving Image in Britain Since 1989

Professor of Modern and Contemporary Art at the Courtauld Institute, London.